Tatarstan
This article is about the republic in Russia. For the ship, see Gepard class frigate.

The Republic of Tatarstan (Russian: Респу́блика Татарста́н, Respublika Tatarstan; Tatar Cyrillic: Татарстан Республикасы, Latin: Tatarstan Respublikası) is a federal subject of Russia (a republic) located in the Volga Federal District. Its capital is the city of Kazan, which is one of Russia's largest and most prosperous cities. The republic borders with Kirov, Ulyanovsk, Samara, and Orenburg Oblasts, and with the Mari El, Udmurt, and Chuvash Republics, as well as with the Republic of Bashkortostan. The unofficial Tatarstan motto is: Bez Buldırabız! (We can!).[13] Population: 3,786,358 (2010 Census preliminary results);[14]

"Tatarstan" derives from the name of the Tatar ethnic group and the Persian suffix -stan (an ending common to many Central Asian countries). Another version of the Russian name is "Тата́рия" (Tatariya), which was official along with "Tatar ASSR" during the Soviet rule. 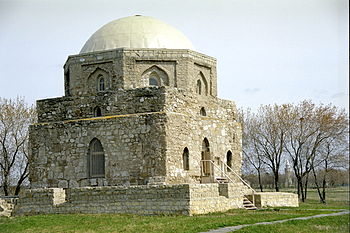 The earliest known organized state within the boundaries of Tatarstan was Volga Bulgaria (c. 700–1238 CE). The Volga Bulgars had an advanced mercantile state with trade contacts throughout Inner Eurasia, the Middle East and the Baltic, which maintained its independence despite pressure by such nations as the Khazars, the Kievan Rus and the Cuman-Kipchaks. Islam was introduced by missionaries from Baghdad around the time of ibn Fadlan's journey in 922.

Volga Bulgaria finally fell to the armies of the Mongol prince Batu Khan in the late 1230s (see Mongol invasion of Volga Bulgaria.) The inhabitants, mixing with the Golden Horde's Turco-Mongolian, Kipchak-speaking troops and settlers, became known as the "Volga Tatars." Another theory postulates that there were no ethnic changes in that period, and Bulgars simply switched to the Kipchak-based Tatar language. In the 1430s, the region again became independent as the base of the Khanate of Kazan, a capital having been established in Kazan, 170 km up the Volga from the ruined capital of the Bulgars.

The Khanate of Kazan was conquered by the troops of Tsar Ivan the Terrible in the 1550s, with Kazan being taken in 1552. Some Tatars were forcibly converted to Christianity and cathedrals were built in Kazan; by 1593 all mosques in the area were destroyed. The Russian government forbade the construction of mosques, a prohibition that was not lifted until the 18th century by Catherine the Great. The first mosque to be rebuilt under Catherine's auspices was constructed in 1766-1770.

In the 19th century Tatarstan became a center of Jadidism, an Islamic movement that preached tolerance of other religions. Under the influence of local Jadidist theologians, the Tatars were renowned for their friendly relations with other peoples of the Russian Empire. However, after the October Revolution religion was largely outlawed and all theologians were repressed.

During the Civil War of 1918-1920 Tatar nationalists attempted to establish an independent republic (the Idel-Ural State). They were, however, put down by the Bolsheviks and the Tatar Autonomous Soviet Socialist Republic was established on 27 May 1920. There was a famine in the Tatar Autonomous Soviet Socialist Republic in 1921 to 1922 as a result of war communist policy. The boundaries of the republic did not include majority of the Volga Tatars. The Tatar Union of the Godless were persecuted in Stalin's 1928 purges.

There are about two million ethnic Tatars and a million and a half ethnic Russians, along with significant numbers of Chuvash, Mari, and Udmurts, many of whom are Tatar-speaking. The Ukrainian, Mordvin, and Bashkir minorities are also significant. Most Tatars are Sunni Muslims, but a small minority known as Keräşen Tatars are Orthodox and some of them regard themselves as being different from other Tatars even though most Keräşen dialects differ only slightly from the Central Dialect of the Tatar language.[18] There is a fair degree of speculation as to the early origins of the different groups of Tatars, but most Tatars no longer view religious identity as being as important as it once was, and the religious and linguistic subgroups have intermingled considerably. Nevertheless, despite many decades of assimilation and intermingling, some Keräşen demanded, and were awarded, the option of being specifically enumerated in 2002. This has provoked great controversy however, as many intellectuals have sought to portray the Tatars as homogeneous and indivisible.[19] Although listed separately below, the Keräşen are still included in the grand total for the Tatars. Another unique ethnic group, living in Tatarstan only are the Qaratay Mordvins.

Map of the Republic of Tatarstan

The republic is located in the center of the East European Plain, approximately 800 kilometers (500 mi) east of Moscow. It lies between the Volga River and the Kama River (a tributary of the Volga), and extends east to the Ural mountains.

Major rivers include (Tatar names are given in parentheses):

Major reservoirs of the republic include (Tatar names are given in parentheses): 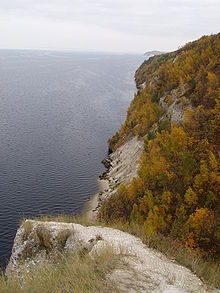 View on the Taima River from Devil's Tower in Yelabuga

Major natural resources of Tatarstan include oil, natural gas, gypsum, and more. It is estimated that the Republic has over one billion tons of oil deposits.[20]

In accordance with the Constitution of the Republic of Tatarstan the two state languages of the republic are Tatar and Russian.

According to the Constitution of the Republic of Tatarstan, the President can be elected only by the people of Tatarstan, but due to Russian federal law this law was suspended for an indefinite term. The Russian law about election of governors says they should be elected by local parliaments and that the candidate can be presented only by the president.

On March 25, 2005 Shaymiyev was re-elected for his fourth term by the State Council. This election was held after changes in electoral law and does not contradict the Constitutions of Tatarstan and Russia. 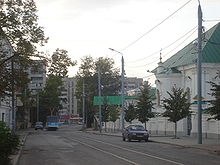 An area in Kazan with a Mosque in the background

Tatarstan is one of the most economically developed regions of Russia. The republic is highly industrialized, and ranks second only to Samara Oblast in terms of industrial production per km2.[21] Tatarstan's GDP per capita was USD 12,325 in 2004,[22] with GDP in 2008 at about 930 billion rubles.[20]

The region's main source of wealth is oil. Tatarstan produces 32 million tonnes of crude oil per year and has estimated oil reserves of more than 1 billion tons.[20][23] Industrial production constitutes 45% of the Republic's gross regional domestic product. The most developed manufacturing industries are petrochemical industry and machine building. The truck-maker KamAZ is the region's largest enterprise and employs about 1/5 of Tatarstan's work force.[23] Kazanorgsintez, based in Kazan, is one of Russia's largest chemical companies.[24] Tatarstan's aviation industry produces Tu-214 passenger airplanes and helicopters.[20] The Kazan Helicopter Plant is one of the largest helicopter manufacturers in the world.[25] Engineering, textiles, clothing, wood processing, and food industries are also of key significance in Tatarstan.[21]

Tatarstan consists of three distinguished industrial regions. The northwestern part is an old industrial region where engineering, chemical and light industry dominate. In the new industrial Northeast region with its core in the Naberezhnye Chelny-Nizhnekamsk agglomeration, major industries are automobile construction, chemical industry, and power engineering. The Southeast region has oil production with engineering under development. The North, Central, South, and Southwest parts of the Republic are rural regions.[26]

The republic has a highly developed transport network. It mainly comprises highways, railway lines, four navigable rivers — Volga (İdel), Kama (Çulman), Vyatka (Noqrat) and Belaya (Ağidel), and oil pipelines and airlines. The territory of Tatarstan is crossed by the main gas pipelines carrying natural gas from Urengoy and Yamburg to the west and the major oil pipelines supplying oil to various cities in the European part of Russia. 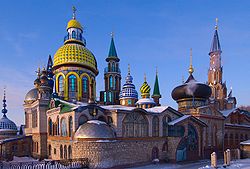 All Religions Temple. A building and cultural center built by the local artist Ildar Khanov

Major libraries include the Science Library of Kazan State University and the National Library of the Republic of Tatarstan. There are two museums of republican significance, as well as 90 museums of local importance. In the past several years new museums appeared throughout the Republic.

There are twelve theatrical institutions in Tatarstan.[27] The state orchestra is the National Tatarstan Orchestra. 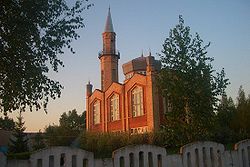 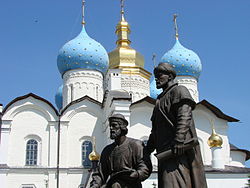 Orthodox Church in the Kazan Kremlin.

Established in 922, the first Muslim state in Russia was Volga Bulgaria from which the Tatars inherited Islam. Islam was introduced by missionaries[28] from Baghdad around the time of Ibn Fadlan's journey in 922. Islam's long presence in Russia also extends at least as far back as the conquest of the Khanate of Kazan in 1552, which brought the Tatars and Bashkirs on the Middle Volga into Russia.

In the 1430s, the region became independent as the base of the Khanate of Kazan, a capital having been established in Kazan, 170 km up the Volga from the ruined capital of the Bulgars. The Khanate of Kazan was conquered by the troops of Tsar Ivan IV the Terrible in the 1550s, with Kazan being taken in 1552. Some Tatars were forcibly converted to Christianity and cathedrals were built in Kazan; by 1593, mosques in the area were destroyed. The Russian government forbade the construction of mosques, a prohibition that was not lifted until the 18th century by Catherine II.

In 1990, there were only 100 mosques but the number, as of 2004, rose to well over 1,000. As of January 1, 2008, as many as 1,398 religious organizations were registered in Tatarstan, of which 1,055 were Muslim. Today, Sunni Islam is the most common faith in Tatarstan, as 52% of the estimated 3.8 million population is Muslim.[29] In September 2010, Eid al fitr as well May 21, the day the Volga Bulgars embraced Islam, were made public holidays.[30] Tatarstan also hosted an international Muslim film festival which screened over 70 films from 28 countries including Jordan, Afghanistan and Egypt.[31]

The Russian Orthodox Church is the second largest active religion in Tatarstan, and has been so for more than 150 years[32], with an estimated 1.6 million followers made up of Ethnic Russians, Mordvins, Armenians, Belarusians, Mari people, Georgians, Chuvash and a number of Orthodox Tatars which together comprise of 46% of the 3.8 million population of Tatarstan. On the 23rd of August 2010 the “Orthodox monuments of Tatarstan” exhibition was held in Kazan by the Tatarstan Ministry of Culture and the Kazan Eparchy.[33] At all public events an Orthodox Priest is called upon along with an Islamic Mufti.[34]