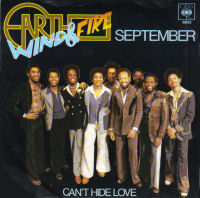 *It is used in the video game "" (Europe release).
*A of the song also appears during a stage of the "". This song is one of the few in the game where the instrumentals "do not" get solos for the breaks/cutscenes, but instead the vocalist keeps singing.
*A remix is played in the Japanese in the film "Babel" with 's song "The Joker."
*EWF sang a special TV-related version of the song with the at the .
*It is played at the closing scene in the film "", when all the museum exhibits are having a party in the museum at night.
*The song served as 's campaign theme during his US Presidential campaign.
*In the Netherlands, X-Factor's second finalist Richy sung this in one of the broadcasts.
*In the game "" a remix called "September 1999" is playable.
*The song is in GuitarFreaks V4 and DrumMania V4.
*In the closing credits of the movie "Get Over It", the song is performed by and Vitamin C.
* does a gospel version of the song on the tribute album "Interpretations".
*In the movie, , this song is used during the dance near the end of the movie.
*In the movie, , an apparently remixed version of the song is used during the outdoor scene involving the whole family attempting aerobics. Despite its apparent importance to the development of the characters, it is not included on the soundtrack.
*In () the song was remixed by Phat's & Small and became a dance hit.
*On December 14, 2007, the song was covered during Fox Television's reality-competition by Nashville big-band group .
*Samples of the song are found in Philippine singer 's 1997 dance single "High".
*The song appears in the video game
*In the episode "" the song is played when enters, what was, the body of the lead singer in an cover band. This was ultimately to get into bed with him but he told (who transferred ' mind) that it was so he could cook eggs for him.
*Also appears on a promo on ABC for their hit shows premiering in the Fall 2008
* parodied the song for Season 3 of as
* arranged the song for 18-piece big band on his album "Act Your Age."