David Samuel Cohen (born July 13, 1966), primarily known as David X. Cohen, is an American television writer. He has written for The Simpsons and he is the head writer and executive producer of Futurama.

Cohen was born as David S. Cohen. The alias "David X. Cohen" was adopted around the origin of his creation, Futurama. As both of his parents were biologists, Cohen had always planned to be a scientist, but he also enjoyed writing and drawing cartoons.[1]

Cohen graduated from Dwight Morrow High School in Englewood, New Jersey, where he wrote the humor column for the high school paper and was a member of the school's state champion mathematics team.[2] From there, Cohen went on to attend Harvard University, graduating with a B.Sc. in physics, and the University of California, Berkeley, with an M.S. in computer science.[3] While at Harvard, he wrote for and served as President of the Harvard Lampoon, and was classmates in the Harvard physics department with director Lawrence Guterman. Both studied under physicist Sidney Coleman and Nobel Prize winner Norman F. Ramsey, as well as Fields Medal winner David Mumford.

Cohen's most notable academic publication concerned the theoretical computer science problem of pancake sorting,[4] which was also the subject of an academic publication by Bill Gates.[5] In addition, Cohen is credited as a co-author on several papers by computer vision researcher Alan Yuille.

After three years of graduate school, Cohen took a leave of absence and started writing sample TV scripts. In 1992, this landed him a job writing two of the earliest Beavis and Butthead episodes. In 1993, Cohen began working on The Simpsons, writing or co-writing thirteen episodes. Nearly five years later, Cohen would team with Matt Groening to develop Futurama, where he would serve as writer or co-writer of six episodes and executive producer and head writer of the series' entire run. 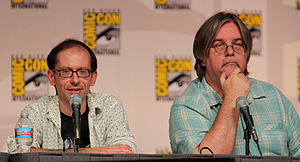 Cohen with Matt Groening at the Futurama panel of Comic-Con 2009.

After spending a few years researching science fiction, Groening got together with Cohen in 1997 and developed Futurama, an animated series about life in the year 3000.[6] By the time they pitched the series to Fox in April 1998, Groening and Cohen had composed many characters and storylines; Groening claimed they had gone "overboard" in their discussions.[6] Groening described trying to get the show on the air as "by far the worst experience of [his] grown-up life."[7] The show premiered on March 28, 1999.

After four years on the air, the show was canceled by Fox. In a similar situation as Family Guy, however, strong DVD sales and very stable ratings on Adult Swim brought Futurama back to life. When Comedy Central began negotiating for the rights to air Futurama reruns, Fox suggested that there was a possibility of also creating new episodes. When Comedy Central committed to sixteen new episodes, it was decided that four straight-to-DVD films—Bender's Big Score (2007), The Beast with a Billion Backs (2008), Bender's Game (2008) and Into the Wild Green Yonder (2009)—would be produced.[8][9] Since no new Futurama projects were in production, the movie Into the Wild Green Yonder was designed to stand as the Futurama series finale. However, Groening had expressed a desire to continue the Futurama franchise in some form, including as a theatrical film.[10] In an interview with CNN, Groening said that "we have a great relationship with Comedy Central and we would love to do more episodes for them, but I don't know...We're having discussions and there is some enthusiasm but I can't tell if it's just me."[11]

Comedy Central picked up the show for 26 new half-hour episodes that began airing in mid-2010.[12][13][14] Cohen told Newsday in August 2009 that the reported 26-episode order means "[i]t will be up to 26. I can't guarantee it will be 26. But I think there's a pretty good chance it'll be exactly 26. Fox has been a little bit cagey about it, even internally. But nobody's too concerned. We're plunging ahead".[15] Two episodes were in the process of being voice-recorded at that time, with an additional "six scripts ... in the works, ranging in scale from 'it's a crazy idea that someone's grandmother thought of' to 'it's all on paper'. ..."The first episode is tentatively titled 'Rebirth' — and in a surprisingly literal fashion, as things turn out". It aired June 24 on Comedy Central.[15]

Cohen designed one of the robots in the robot strip club which he said was "his one artistic contribution to the show". The robot's waist gyrated sexily using a planetary gear. In an episode's commentary, this artistic contribution is discussed by Futurama co-creator Matt Groening, who describes Cohen as being very particular about how the animators used his design, and that Cohen's original drawing is still framed in his office.

He makes some brief cameo appearances in cartoon form, first in the Futurama episode "A Bicyclops Built for Two", along with several other people who worked on the show, and second on "I Dated a Robot" as a member of the eBay audience. Both appearances are pointed out during DVD commentaries. Also both appearances take place in the internet. You can also see him in a soup line in "Bender's Big Score". (He also appears in animated form in the Simpsons episode "The Itchy & Scratchy & Poochie Show" wearing the squid shirt.)

When the primetime animated shows unionized in 1998, Cohen was forced to change his name as there was already another member credited as David S. Cohen and the Writers Guild of America does not allow members to have the same exact name. Instead of using his full middle name he chose to use the middle initial "X"–because it sounded "sci-fi-ish"–and has jokingly said that the "X" would make him "the David Cohen people would remember".[16] The "X" does not actually stand for anything, but Cohen included a period "so people don't think it's some mathematical formula: 'David times Cohen' or something".[17]

Cohen is credited with writing or co-writing the following episodes: