During its ten years in production, the Commando was popular all over the world. In the United Kingdom it won the MCN "Machine of the Year" award for five successive years from 1968-1972.[1] Given that its engine was an old pre-unit design, even Norton's chairman, Dennis Poore, expressed surprise at the Commando's remarkable success.[2]

The origins of the Norton Commando can be traced back to the late 1940s when the 497 cc (30.3 cu in) Norton Model 7 Twin, designed by Bert Hopwood and initially an export only model. The twin cylinder design evolved into the 650 cc Norton Dominator and 750 cc Norton Atlas before being launched as the 750 cc Commando in 1967.[3] As well as having a radical new frame, the Commando's parallel twin engine (which was mounted vertically in earlier models) was tilted forward. This was relatively easy as the engine was "pre-unit" (i.e. the gearbox was not integral with the crankcase), and the change gave three benefits: (i) the centre of gravity was moved further forward; (ii) this allowed more space behind the carburetors for the airbox; and (iii) it gave an attractive raked appearance to the motorcycle.

The revolutionary part of the Commando, compared to earlier Norton models, was the award winning frame developed by former Rolls-Royce engineer Dr. Stefan Bauer.[4] He believed the classic Norton Featherbed frame design went against all engineering principles, so Bauer designed his frame around a single 2.25 in (57 mm) top tube. Bauer tried to free the Commando from classic twin vibration problems, which had severely increased as the volume of the basic engine design expanded from the 500 cc of Edward Turner's 1938 Triumph Speed Twin. He, with Norton Villiers Chief Engineer Bernard Hooper and assistant Bob Trigg, decided that the engine, gearbox and swing-arm assembly were to be bolted together and isolated from the frame by special rubber mountings.[5]

This eliminated the extreme vibration problems that were apparent in other models in the range, as it effectively separated the driver from the engine. Named the Isolastic anti-vibration system, the system's patent document listed Hooper as the lead inventor.[non-primary source needed][6] Although the Isolastic system did reduce vibration, maintaining the required free play in the engine mountings at the correct level was crucial to its success. Too little play brought the vibration back; too much, and the result was "very poor" handling.

The Norton Commando was introduced in 1967 at the Earls Court Show. The first production machines completed in April 1968 had bending frame problems, removed with the introduction of a new frame in January 1969. The original model, called the 'Fastback' was joined by the scrambler style 'S Type' which had a high level left-side exhaust and a 2.5 gallon petrol tank. The first Commandos had a twin-leading-shoe front drum brake.

Production of the machine was initially complex and located across different parts of England, with the engines produced in Wolverhampton, frames in Manchester, while components and final assembly was at Burrage Grove, Plumstead. In late 1968 Plumstead works was subject to a Greater London Council compulsory purchase order, and closed in July 1969. With assistance of a Government subsidy, the assembly line was moved to North Way, Andover; with the Test Department in an aircraft hangar on Thruxton Airfield. Frame manufacturing was transferred to Wolverhampton, where a second production line produced about 80 complete machines each week. Components and complete engines and gearboxes were also shipped overnight, from Wolverhampton to the Andover assembly line.

The production racer, featuring an overhead valve (OHV) tuned engine, front disk brake and was finished in bright yellow - known as the 'Yellow Peril'. In March to June 1970 the updated S called the 'Roadster' had the 750 cc OHV engine, low-level exhaust, upward angled silencers with reverse cones. September 1970 saw the introduction of the classic 'Fastback Mk2', which had alloy levers with modified stands and chain guards. The ‘Street Scrambler’ and the ‘Hi Rider’ were launched in May 1971, with the ‘Fastback Long Range’ with increased petrol tank capacity from July 1971.

The ‘Combat’ engine was introduced in January 1972 saw the appearance of the ‘Mk4 Fastback’, updated ‘Roadster’ and the ‘750 Interstate’. The ‘Combat’ delivered 65 brake horsepower (48 kW) at 6500 rpm[citation needed] with a 10:1 compression ratio, but the stressed 750 cc twin proved extremely unreliable, with main bearing failures and broken pistons common.

The 'Combat' engine combined with quality control problems gave the company a bad reputation, which was highly covered in the press. By the middle of 1972 BSA Triumph group were in serious financial trouble. The UK Government decided to bail the company out with a financial rescue package, providing it would agree to merge with Norton Villiers. Norton Villiers Triumph was duly formed and the new company got off to a shaky start.

The last of the 750 series, the MkV was produced from November 1972 to mid-1973 as a 1973 model and featured improved crank bearings and the standard grind camshaft. Compression was reduced to 9.4:1.

After some police forces expressed interest in the Commando, Neale Shilton was recruited from Triumph to produce a Commando to police specifications. The end result was the 'Interpol' machine, which sold well to police forces, both at home and abroad. The 750 cc machine was fitted with panniers, top box, fairing, radio mountings, police lights, and auxiliary equipment. (The 'Interpol' name was retained for Norton's later rotary engined Police motorcycle). 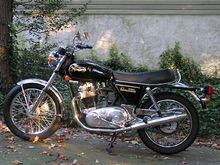 In January 1973 the ‘Mk.5 Fastback’ was launched and the ‘Long Range’ was discontinued, foreshadowing the first 850 cc machines launched in April 1973. The ‘Roadster’, ‘Hi Rider’ and the ‘Interstate’ all began to use a new 828 cc. engine, which had similar power to the 750 cc models but were less stressed.

In late 1973 redundancy notices were issued at Andover, followed by a sit-in at the works. The Conservative Government withdrew the subsidy in early 1974, restored by the Labour party post the general election. NVT resultantly decided to concentrate production of the Commando at Wolverhampton and Small Heath, causing unrest at Meriden which resulted in a workers’ sit in and stopping production at Small Heath. By the end of 1974 NVT had lost over £3 million.

However, the company still managed to produce new Commando models, with 1974 seeing the release of the Roadster based ‘JPN Replica’ and the ‘Mk.2a Interstate’.

The 850 cc MK3 Commando was launched in March 1975 and for the first time was fitted with an "electric starter" - better described as electric "assister", as it would soon drain the battery.[7] The range of models was reduced to just two machines, the ‘Mk.3 Interstate’ and the ‘Roadster’, both with a left side gear change, right foot brake and rear disk brake to comply with United States vehicle regulations. The specification remained unchanged until October 1977 when the last machines were made, although few 'Roadster's were made in the end due to the higher cash sales value of the Interstate.

In 1975 the Industry Minister recalled a loan for £4 million and refused to renew the company’s export credits. The company then went into receivership and redundancies were announced for all of the staff at the various sites. At Wolverhampton an action committee was formed in an effort to continue production and develop the ‘Wulf’ engine - but the works was closed anyway.

NVT was saved when the Small Heath/Meriden part of the company was subsidised by Industry Secretary Tony Benn as Industry Secretary, but this did not include Commando production. Ironically, the new company bought the gates from the demolished Tong Castle and erected them at the works entrance in Marston Road.[8]

Right from its 1967 beginnings the Commando took part in racing events. After successes in 1969 by dealer entered machines like Paul Smart's second and Mick Andrew's 4th places in the Isle of Man TT Production class and a win in the Hutchinson 100 Production Class by Mick Andrew on the Gus Kuhn entered Commando and 4th by Peter Williams' Arter Bros machine, the company decided to produce a racing model - hence the developed S and "Yellow Peril" models.

In the early 1970s, with sponsorship from John Player Special cigarettes, Norton went factory racing.[9] The new race bikes were based on the Commando, and in 1973 Peter Williams won the Formula 750 Isle of Man TT on a monocoque-framed "JPS Norton" special. Shortly afterward there was a merger of Norton Villiers with BSA-Triumph (to form NVT). This event led the factory to abandon racing; and a Norton factory team did not resume racing until the Wankel-engined Nortons of the 1980s.

In light of its "last of the classic British twins" tag, and the fact that many of the trade marks were disputed and patents expired, a number of new Norton companies began to emerge. These were based on production of new parts sourced from various manufacturers, and the legal battle over the Norton name between Germany (whose Norton was based on the Rotax 650 cc engine that powers the smaller BMW motorcycles), Canada and North America. Many used the Commando name for their lead model, or included the prospect of a Commando twin at a later date.

However, the most interesting development for original Commando fans was the development of re-manufactured original motorcycles. These mainly came from Norvil in the UK[10] and two companies in the United States, Colorado Norton Works[11] and Kenny Dreer's Vintage Rebuilds based in Portland, Oregon.[12] From 1995 onwards Vintage Rebuilds began restoring vintage British and Italian motorcycles, with Dreer showing a "new" Commando based Norton VR880 Sprint Special in 1999 with newly cast and manufactured parts, but using a bored out 880 cc twin engine with some modern developments. Kenny Dreer progressed from restoring and upgrading Norton Commandos to producing whole machines. He modernised the design and in the early 2000s went into series production of the Commando 961 SS, which combined traditional Norton cafe racer styling with new technology including carbon fibre wheels to reduce weight and a chro-moly tubular steel frame.[13] Dreer was forced to suspend production in April 2006 following funding problems.[14]

UK businessman Stuart Garner, owner of Norton Racing Ltd, acquired the rights to the Norton Commando brand. His company, Norton Motorcycles (UK) Ltd, established a new factory at Donington Park Derbyshire to manufacture a new Commando model, designed by Simon Skinner. There are three models in the new Commando range: a limited edition of 200 Commando 961 SEs, a Cafe Racer and a Sport model.[15] In March 2010 Norton shipped the first new Norton Commando for over 30 years; and by mid-April 2010 the Company was shipping 5-10 new machines per week.[16] The engine is a 961cc fuel-injected air-cooled ohv 270° parallel twin that produces 79 hp(59 kW).[17] The short-stroke engine is oversquare, with a 88 x 79mm bore and stroke. At the bike's front are inverted (USD) forks and twin disc brakes. The engine (rather like the BSA A7) is "semi-pre-unit", in that the 5-speed gearbox is a separate casting, but is bolted directly to the primary chaincase. Some styling is reminiscent of the original Norton Commando, especially the engine and petrol tank. The new Norton has received favourable press reviews[18][19]