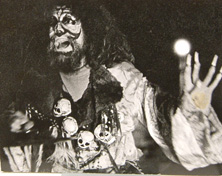 The Floating Lotus Magic Opera Company was a poetic sacred folk theater group created and directed by poet Daniel Moore (presently Sufi-Muslim poet Daniel Abdal-Hayy Moore http://www.danielmoorepoetry.com, http://ecstaticxchange.wordpress.com), who in 1964 published a volume of poetry, Dawn Visions, with Lawrence Ferlinghetti's of San Francisco. The opera company was based in North , from around 1966 to sometime in 1969, and for three years presented two major musical ritual dramas, The Walls Are Running Blood, and Bliss Apocalypse. The cast, crew and orchestra members were primarily enthusiastic amateurs, many originally painters or artists in other mediums who were intrigued with the vision of The Floating Lotus and eager to participate in what was a celebration and expression of the tribal consciousness "in the air" in Berkeley, California at that very explosive and expressive time. Often, however, the orchestra in particular was graced with actual musicians of some stature, such as poet and musician (formerly of the ), poet, musician and translator , light-artist and musician , writer and musician and others. Internationally famous composer occasionally played his with the orchestra and provided some musical direction, as did Ramon Sender, who spent some time coaching the players and dancers as well. One of the members of the chorus, dancer , went on to become the disciple of South Indian Dance Master, Balasaraswati, and subsequently opened her own dance studio in New York, Lotus Music & Dance, http://www.lotusmusicanddance.org/ very much present today (2007).

The impetus and inspiration for the theater company was manifold: Zen Buddhism, which Moore and others of the company were studying at the time, primarily with Zen Master Shrunryu Suzuki in San Francisco, the very vivid and public poetry of the time, by such luminaries as , and its application to open-air ritual theater, as theorized by Antonin Artaud, the music and dance of folk theater, such as Balinese Gamelan rituals, Tibetan monastery rituals of evocation and exorcism, Kathakali of India, etc. and the general wild imagination of the era. The intention underlying both of the productions was the transformation of evil and dark energies, such as were driving the Vietnam War, into positive and light energies, through a cathartic initiation, which the central hero had to undergo in both operas. Each performance began with the company coming out in front of the set and sitting in a large circle to meditate and chant OM, the intonation of peace, for some minutes before commencing the opera. The operas themselves were highly choreographed and dramatically intense, with gongs and drums and horns underlying the chanted poetry from the players, ending in a thunderous climax, that then transformed into peaceful meditation. At each performance the audience sat in silence with the company at the end in meditation, sometimes for over twenty minutes, then food was passed out (free), and the audience invited down from the amphitheater seats to dance in jubilation.

Each performance of their major works was performed at night, in an amphitheater in North Berkeley, Hinkel Park, by torchlight, with Coleman Lanterns set in reflecting bases for footlights, with sets of painted backdrops on large canvas shapes, using "folk" elements such as neon painted cardboard flames and silvery wings, silken cloth rippled in the torchlight to approximate a river of light -- basically simple elements with highly charged visual effects, but without modern technology of any kind. No electric lights, no microphones, nor did the company charge money for the performances, but a hat was passed around afterwards, with enough "take" to carry on until the next week, from an audience that usually comprised about 200 or so people.

Other smaller occasional pieces were also developed over the three year period as the situation required, The Floating Lotus being a kind of peoples' ritual for centering and ecstatic release. They also performed either these pieces or sometimes the major operas at , Chet Helms' , the and Fillmore West Ballroom.

For the full text of Bliss Apocalypse, with stage business and photographs, and photographgs from The Walls Are Running Blood, visit the Theater category at [Daniel Abdal-Hayy Moore's website] : [http://www.danielmoorepoetry.com]