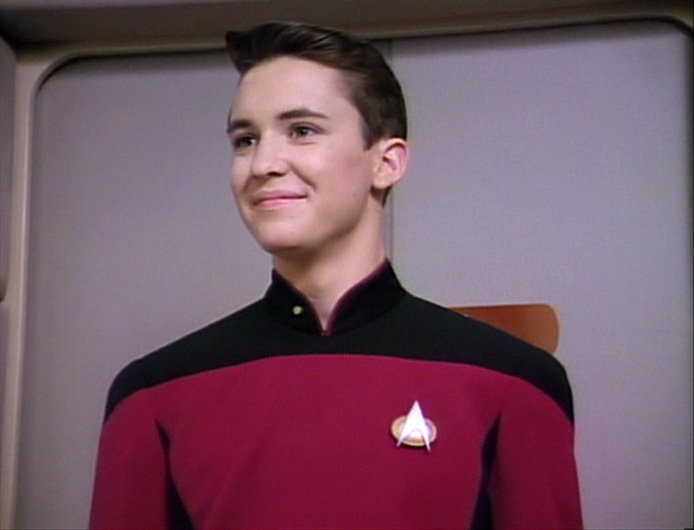 Wil Wheaton first read for the role in 1986.Fact|date=November 2007

Subsequently, in the television series "Star Trek: The Next Generation", the character of Wesley Crusher first arrived on the "Enterprise"-D with his mother, soon after Captain assumed command. Captain Picard was annoyed by Crusher at first – as Picard is uncomfortable around all children – but he comes to realize that Crusher understands many things beyond his age and has inherited his mother's high intelligence.

An alien Traveler expressed to Captain Picard that Crusher had a unique intelligence and great potential if provided encouragement and opportunity, comparing him to a child prodigy like Mozart. Picard soon appointed Crusher to an acting ensign.

In early episodes of the series, Picard did not allow Crusher on the bridge of the ship. Crusher eventually took the entrance exam for . His test score ranked lower than expected, so he decided to stay on the "Enterprise"-D to gain more experience "Coming of Age". Later he missed his second chance to take the academy entrance exam in order to assist the "Enterprise"-D crew in rescuing , , and from hostile . Picard soon granted him a field promotion to full ensign ("").

Crusher was invited to reapply the following year, took the exam, and was accepted into the academy. He stayed in the academy for several years until the Traveler re-contacted him. He resigned his commission and went with the traveler to explore other planes of reality ("").

At approximately the time of "Star Trek: Nemesis", Crusher rejoined Starfleet, and had made it to the rank of lieutenant junior grade. In other timelines – "Yesterday's Enterprise", "Parallels" – Crusher made it to full lieutenant.

The back story states that Wesley Crusher is the son of and .

*It is stated in several commentaries for the TV show "" that the character is loosely based on Wesley Crusher. Series co-creator says the character was intended to parody "annoying" characters such as Wesley, who many fans would like to "punch in the face" except in Cubert's case, he actually would be punched.