The Champoeg Meetings in Oregon Country were the first attempts at governing in the Pacific Northwest by United States European-American pioneers. Prior to this, the closest entity to a government was the Hudson's Bay Company, mainly through Dr. John McLoughlin at Fort Vancouver in present day Vancouver, Washington.[1] There were a series of meetings over three years held at Champoeg on the French Prairie along the Willamette River in present day Marion County, Oregon, beginning in 1841.[2]

A small but growing number of pioneers were settling in the Willamette Valley where no Euro-American government was in place. With the death of prominent settler Ewing Young in 1841, a group of settlers began to advocate for a settler run government in the region. These meetings at Champoeg culminated in a vote on May 2, 1843, with a vote of 52-50 in favor of forming what became the Provisional Government of Oregon. Although primarily supported by the American pioneers in the region, several French-Canadian settlers did vote in favor of forming the government. A state park and marker at the site of the May 2 vote commemorate the proceedings, as well as a large mural behind the desk of the Oregon Speaker of the House in the Oregon House of Representatives chamber at the Oregon State Capitol in Salem.

After Lewis & Clark’s journey through the region, leaving in 1806, others of European descent explored more and more of the land west of the Rockies.[3] These first explorers were mainly mountain men engaged in the fur trade.[3] Following behind these men were the trading posts set up by people such as John Jacob Astor and those created by the Hudson's Bay Company, the primary forts being Fort Astoria at the mouth of the Columbia River and Fort Vancouver near the confluence of the Willamette and Columbia Rivers. At this time the region was claimed by a variety of European powers such as Spain, Russia, and Great Britain, along with the United States. In 1818, the United States and Britain signed a treaty that called for the two countries to peaceably co-exist in the region, but not exclude other claims. Through a series of other treaties the number of countries claiming the Oregon Country was reduced to just two, the United States and Britain.

Britain and the U.S. continued the "joint occupation" as economic activity in the region continued to expand. In the 1830s missionaries such as Jason Lee, Spaulding, Marcus and Narcissa Whitman would also travel overland to Oregon Country and establish missions among the Native Americans. As time passed many of these trappers and missionaries settled the land and developed farms and other instruments of economy.[3] Then in the 1840s more and more settlers arrived via the Oregon Trail that the early missionaries and trappers helped to pioneer.[3] Finally, enough Americans, Canadians and Europeans were living in this land, that by Western standards was considered ungoverned, that a critical mass was reached and the settlers began to develop plans for a government.

The majority of the meetings were held at the French-Canadian enclave of Champoeg on the banks of the Willamette River. This part of the Willamette Valley was and still is known as French Prairie due to the early settlers speaking French as their first language. Some of the meetings were held at the Oregon Institute (predecessor to Willamette University) further south of Champoeg in present day Salem and downriver in Oregon City.[4]

The Champoeg name itself has an unknown origin. Some theories are that it was the Native American's name for the spot along the Willamette River, originally Champooik. Other theories are that it is of French origin, or a French variation on the Native American term. The name would also be used as the name of one of the early districts of the government, later becoming Marion County, Oregon.

In 1841 the early settlers found themselves in need of a government after the death of pioneer Ewing Young. Young had accumulated much wealth as a successful rancher following the Willamette Cattle Company events of 1837 when he and a group of other settlers herded over 600 head of cattle from California to Oregon.[5] This made him very wealthy and intertwined him economically with many of the other pioneers in the valley.[5] Young had died without a will or heir, thus necessitating a need for a probate court.[2] The first meeting was on February 7, 1841, before Young died, followed by an additional meeting on February 17, 1841. Jason Lee served as chairman for these meetings.[3] The first meeting was a general meeting about the formation of some governing body, to which the need became more acute after Ewing Young's death.[3]

The group decided on subsequent meetings to be held on August 1, 1841, and on the first Tuesday in October.[3] The first of the two meetings was held, but after consulting with Commodore Wilkes of the U.S. government and Dr. McLoughlin of the Hudson’s Bay Company concerning forming a government, the group was advised to wait on a government from the United States Congress.[3] Thus plans for provisional government fell through, and the October meeting was never held.[3] However, the pioneers did decide to elect a few people to provide for a limited court system to deal mainly with the Ewing Young estate.

Doctor Ira Babcock of the Methodist Mission was elected as supreme judge with probate powers.[2] Babcock was to use the laws of New York to probate any estates.[6] Other positions created and filled by the group included: George Le Breton as Clerk of the Courts and Public Recorder; William Johnson as High Sheriff; William McCarty, Pierre Belleque, and Havier Laderant as constables.[6] The original government plans were considered top heavy and included a governor, an attorney general, justices of the peace, road commissioners, and even two people to serve as overseers of the indigent.[7]

In Oregon City at the Oregon Lyceum pioneers debated the aspects of forming a government or forming an independent country.[9] Those favoring an independent nation were led by the British faction and Dr. McLoughlin, while George Abernethy led those opposed to a new country.[9] Ultimately those favoring waiting for the United States to take ownership of the region won out in the debates.[9] On September 22, 1842, Dr. Elijah White organized and spoke at a meeting at Champoeg.[4] His purpose was to inform the settlers that he had been commissioned by the United States War Department as a sub-Indian Agent.[4] Additionally, he implied that the pioneers could select him as a magistrate for the region.[4] However, White was not popular among the settlers and this led to additional discussions about forming a government.[4]

Artists depiction of Meek calling for the final vote

On February 1, 1843, residents of the Willamette Valley met at the Oregon Institute in present day Salem, Oregon, to discuss the issue of predatory animals attacking livestock and create a system of bounties on those wild animals in the First Wolf Meeting.[2] The Second Wolf Meeting took place on March 6, 1843, and set in motion the organizing of a provisional government.[4] At this meeting bounties were set up to deal with the predatory animals that were attacking livestock.[3] The last organizational meeting started May 2, 1843, where the pioneers voted on whether to create a provisional government.[2] A mural of the 1843 meeting is on the wall in the House of Representatives in the Oregon State Capitol Building in Salem, Oregon.

The settlers gathered voted on May 2 to create a provisional government with various powers to regulate the populace of the Oregon Country. The vote is recorded as 52 to 50 in favor of the creation of the government, but there is some controversy as to the accuracy of the count and who actually voted in favor of adoption (no controversy on a majority vote).[3] The 52-50 vote account originally appeared in Joseph Meek's biography. The only surviving contemporary record simply notes "A great majority of those present" voted to form a government.[10] The list below was created several decades after the vote, and after many of the participants were deceased.

Those voting for the creation of the provisional government:[11]

Those voting against the creation of the provisional government:[4]

After this vote, the people elected members for a legislative committee to draft a working government. The members selected were: Hill, Shortess, Newell, Beers, Hubbard, Gray, Moore, O’Neil, and Doughty.[3]

Other offices elected on May 2:[3]

Adopted the original Organic Laws of Oregon on July 5, 1843, that was modeled after the Ordinance of 1787 and Iowa's Organic Law, laying out the framework for a working government with the three traditional branches of government.[4] Designed to operate until another country extended its laws over the region, with the implication being that it would be the United States.[4] This document was the de facto first Oregon constitution.

Created the First Executive Committee with Joseph Gale, David Hill, and Alanson Beers elected as the committee members to serve in place of a governor.[13] 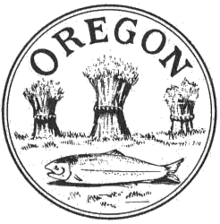 The Provisional Government of Oregon operated as a fully functioning government that taxed, built roads, authorized ferries, passed laws, and even waged war against some Native American tribes in the Cayuse War following the Whitman Massacre. Oregon's pioneers considered this government framework that was installed by the adopted Organic Laws of Oregon to be their first constitution,[14] although in 1844 the legislative committee specifically ruled the organic laws statutory rather than constitutional.[15] Over the next few years the boundary dispute with Great Britain was settled in 1846, which reduced the area claimed as governed by the provisional government to that territory south of the 49th degree of latitude. Then a new territorial government was formed after 1848 when Oregon was added as an official United States territory. The presidentially appointed governor of the Oregon Territory, Joseph Lane, arrived March 3, 1849, and he officially ended the provisional government by declaring U.S. laws and government as in effect over the territory.[3] Oregon entered the Union as the 33rd state on February 14, 1859.