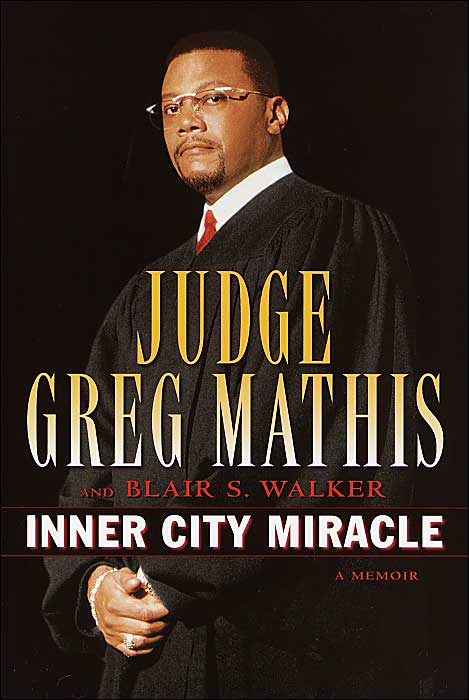 Greg Mathis (born , in ) is a retired 36th District Court and syndicated show judge. His show "" is produced by , and distributed by . It is seen five days a week in most television markets in North America. A spiritually inspired play, "Been there, Done that", based on his life toured twenty-two cities in the U.S. in 2002, and "", a memoir was published by Ballatine Books.

Mathis was born in Detroit, the fourth of four boys born to Alice Mathis, a devoted Seventh-day Adventist, nurses aide, housekeeper and single mother. Mathis was both victim to during the turbulent times of the 1960s and 1970s. He took inspiration from his older brothers and quickly learned to steal, cheat and lie to get what many young men in wanted: property, reputations, and female affection. But his mother's deep devotion to religion and community rescued her son from total destruction, something many of his peers could not escape. From shooting at the from their housing project, to purse snatching in the white suburbs, to using and selling drugs, including , his early life showed little promise, except for his mother's concern and tough love.

Raised in the housing project, Mathis was on the road to a criminal life as a teenager. His father was estranged from him, but associated closely with the , a notorious , that Mathis would eventually join while a teenager. In the 1970s, he was arrested numerous times. Yet when incarcerated in Wayne County Jail, as a seventeen year old juvenile, his mother visited him and broke the tragic news that she was diagnosed with . This event changed Mathis, and he was given the benefit of a considerate judge, who offered probation if he enrolled and passed a course in six months.

Life did not completely change for Mathis after release, his use of drugs and criminal behavior continued, as did his close ties with fellow project 'homeboys', although it was moderated by his new dedication to academics and taking care of his ailing mother. Additionally, his first 'real' job, a job he thought humiliating at first, working at , a job he had to maintain or violate probation and go back to jail, surprisingly inspired him. He liked his manager at and his interaction with people of various and racial backgrounds defeated many of his ingrained s, fears and .

A close family friend helped Mathis get admitted to , and he discovered a new interest in and . He became a campus activist and worked for the Democratic Party, organizing several successful demonstrations against South African policies. He graduated with a B.S. Public Administration from the campus and began to seek employment in Detroit's City Hall. His mother's death was difficult for him to handle at first, but he met his eventual wife shortly after her passing and Linda, a fellow EMU student, and he would go on to have three children together. Mathis has a fourth child, born by a previous relationship with a woman he worked with and dated while working at City Hall [Mathis, Greg and Blair S. Walker. "Inner City Miracle", Ballatine: New York, 2002] . All four kids were raised by Mathis. Daughter Jade, born in 1985, daughter Camara, born in 1987, son Greg Jr. born in 1989 and son Amir, born in 1990.

Mathis worked hard to win the judgeship in the city of . He had many obstacles to overcome. He had failed the once, and had been denied a to practice for several years after graduating from because of his criminal past. He had not accrued an extensive portfolio of legal work, and he was seen by the establishment as someone who lacked the necessary experience and insight to handle the hectic and heavy docket. Yet in 1995, he was elected a superior court judge for Michigan's 36th District, making him the youngest person in the state to hold the post. During the five years he was on the bench, he was rated in the top five of all judges in the 36th District; there are about thirty judges each year.

Mathis began his political career as an unpaid intern, and his presence in Detroit's City Hall was insignificant until he became an assistant to , a city council member. It was at this time Mathis took the LSAT and applied to s; he was fortunate enough to be conditionally admitted to the School of Law, which was located in downtown Detroit, walking distance from city hall. He passed a summer course and was officially admitted to the night program which took four years to complete.

His career prospered when he was appointed head of 's campaign in the state of in 1988. Jackson won the Democratic primary, stunning eventual winner , and much of the nation. Mathis later became head of Mayor 's re-election campaign and after the victory was appointed to run the city's east side city hall, a job that took much of his time, but made him certain he could make a difference in the lives of poor black people.

Mathis has continued to be involved in politics after rising to national entertainment prominence through his television show. Urban politics and African-American movements have been his focus. He has been a guest speaker for black trade union conferences, such as the Institute’s and he was an on stage guest during the ’s Savior Day conference in Detroit’s in 2007. [Nation of Islam. Saviours' Day 2007 Webcast. "Keynote address by the Honorable Minister Louis Farrakhan", Sunday February 25, 2007. Available online at http://www.sd2007.com/webcast/default.htm Accessed 24 Jan 2007]

Mathis consistent interest in Detroit city politics prompted him to ask for the resignation of Detroit Mayor after the Wayne County DA indicted Kilpatrick and his former top aide, , on , conspiracy, obstruction of justice and misconduct in office charges. Mathis spoke out after he was falsely named in an wire story to have co-founded a legal defense fund for Kilpatrick. [Detroit News Report [http://detnews.com/apps/pbcs.dll/article?AID=/20080327/METRO/803270459 "Judge Mathis denies involvement in mayor's legal fund, calls on Kilpatrick to quit"] ] . The statement released by Greg Mathis stated: "I was contacted Wednesday afternoon by Mayor Kilpatrick. He asked if I could serve on his legal defense committee. I informed him, I support due process, but I could not support him. This is the same type of deceit that has plunged our city into a deep crisis. Not only do I not support him, but I recommend he resign so the city can heal and move forward."

In September 2008, Mathis wrote a book called "Street Judge", a novel based on a judge who solves murders. It was Co-written by Zane, a well-known exotic series writer of Zanes Sex Chronicles.