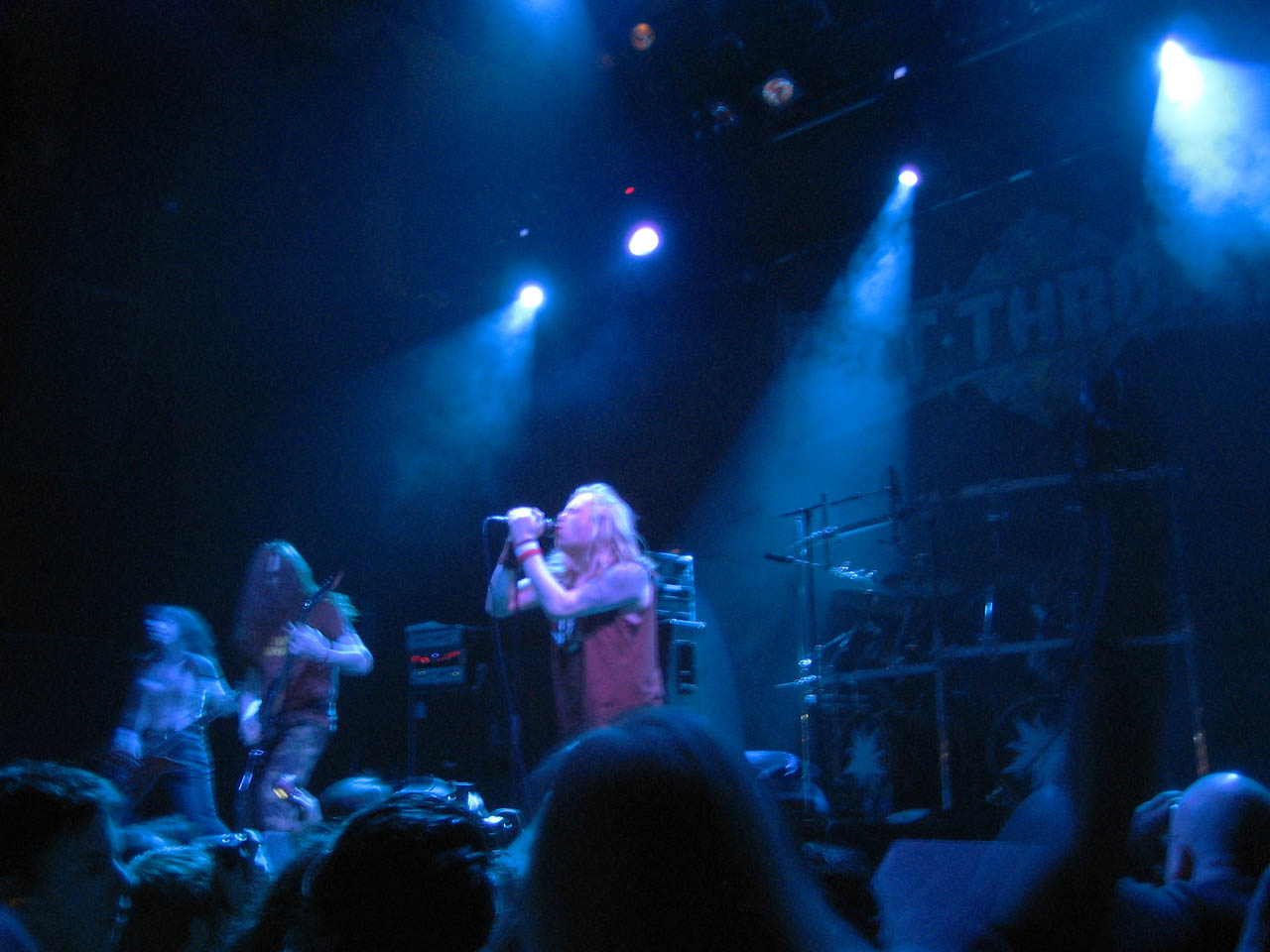 Bolt Thrower are an English band from , . They formed in 1986 and released their first album with in 1988. The band then shifted to a new , , soon becoming one of the best selling bands on that label. Their current label is . The band has had a succession of members and have toured , the , and .

The band takes its name from a weapon in the popular tabletop strategy game "".Fact|date=January 2008 The lyrics and artwork of their second and third albums were based on Warhammer Fantasy Battles, as well as its futuristic companion "", with much of the art actually being provided by the game's publisher, . The general theme of their lyrics is war and its consequences.

Bolt Thrower were formed in September 1986 as a hardcore and band, influenced largely by thrash bands such as and hardcore punk bands like and Discharge

Their second recording was the "Concession of Pain" demo, which they made in September 1987. Gavin had switched to guitars and they recruited to play the bass. However, Alex did not show up for the recording, and so Gavin played both guitar and bass for the demo. Two weeks after the recording session, Gavin's girlfriend replaced Tweedy.

With this line-up they recorded their first Peel session on , , with , the alternative disk jockey of

"They were not satisfied with the deal with Vinyl Solution as it was a pure hardcore label at that time. The label did little promotion for Bolt Thrower and their blend of death metal and hardcore punk, so after one album Bolt Thrower decided to leave Vinyl Solution and were signed by . Earache Records had also signed many other death metal bands including Carcass and . The band worked a little on their style and changed to playing faster, more aggressive and powerful songs, becoming more of a band.Fact|date=February 2008 The production of this album was not great, though it was an improvement on previous attempts. The artwork was done by as a gaming supplement they produced had a similar name to the album Bolt Thrower was about to release. After Games Workshop heard the recording of the songs for Bolt Thrower's second Peel session, which was recorded on , , they offered to do the expensive artwork for Bolt Thrower's album. The band accepted this offer. The record was released in 1989 with the title of "Realm of Chaos" and with the subtitle "Slaves to Darkness". Most of the lyrics to the songs were also influenced by the game, but not merely because of the deal with Games Workshop. Karl, Andy and Gavin were very much into the games Games Workshop produced and they wrote a couple of songs about these games. Some obvious examples are "Plague Bearer" and "World Eater". Most lyrics can however be projected on war, the general theme Bolt Thrower uses. After the recording of "Realm of Chaos" they went on the "Grindcrusher Tour" with label mates , Carcass and . On the "Cenotaph" EP one song ("Realm of Chaos") appears that is recorded during this tour. This EP also features the two CD-bonus tracks from "War Master" and "Realm of Chaos" plus the song "Cenotaph".

Continuing, they recorded their third and final Peel session on , . On this three songs from the upcoming album were performed in raw versions as well as "Lost Souls Domain" off "Realm Of Chaos". Next step in the history of Bolt Thrower was the album titled "". It was recorded, as the previous album, in the Slaughterhouse studios, which burned down two weeks after the recordings were completed. Again Games Workshop offered to do their artwork; however as it was considered too expensive, Bolt Thrower declined the offer. The former head-designer of Games Workshop would do the artwork, resulting in quite similar artwork as that of "Realm of Chaos". For the U.S. tour they did to promote the "War Master" album, they used an old U.S. school bus as tour bus, loaded with many computer games. All three Peel sessions were then released on one CD named "The Peel Sessions 1988-90" in 1991.

Their next step was the album "". The title has a double meaning, as it was their fourth studio album (not counting the Peel sessions), but the album title also refers to the and the capturing of . The cover artwork is a painting from , showing "The Entry of the Crusaders in Constantinople".

They d their guitars even more and wrote slower songs which were heavier and more bombastic. It leans more towards influenced by bands like , in combination with their own massive death metal sound. The album was followed by the tour "World Crusade" with the Polish death metal act Vader and the Swedish death metal band Grave in Europe. The band toured the U.S. again as well as . During this time a single was released called "Spearhead" containing a very heavy, extended remix of the CD track "Spearhead" plus two new tracks and "Dying Creed" off the album.

Their next album is called "" and was released in 1994. It was the final album with Karl Willetts and Andrew Whale. Both left the band because of changing life directions

The album titled "Mercenary" was released on , in and on , in the USA, and features 9 tracks. It is over all a bit slower than its predecessors. However, it is definitely very heavy and sounds very much Bolt Thrower. And Karl returned to perform his previous style of singing; the hardcore punk influences have disappeared again. After the album recording, Karl left the band again and the band have recruited Dave Ingram permanently after he left Benediction.

In November 1998, Earache Records released "Who Dares Wins", an album featuring various older recordings, including the songs from the "Spearhead" EP and "Cenotaph" EP. The band themselves do not agree with the release of this album and warn not to buy it as they consider it a cheap cash-in from Earache. Originally, it was titled "No Guts - No Glory" but the title was changed because one song on "Mercenary" has the same title and Metal Blade objected. Following the release of the album a European tour was done, called "Into the Killing Zone" with on vocals.

After a short European tour in 2001 (which only 5 dates), they started to work on a new album. "" was released in late 2001 on Metal Blade and shows a progression from the direction taken on "Mercenary". It contains 9 tracks; the has one bonus track. Martin Kearns is now back with the band after he settled his things in his life. Alex Thomas departed since he lacked interest in the musical direction of Bolt Thrower.

In 2004 the band began working on new material for their latest album. They intended to record it in the May 2004, with the release set to the end of the year by Metal Blade. Meanwhile a European tour and a U.S. tour were prepared. Unfortunately, right before the recording could begin, Dave Ingram decided to leave, due to health and personal issues

Meanwhile, Earache has coincided the release of "Those Once Loyal" with a re-release of the "Realm of Chaos" featuring new artwork. The band encourage people not to buy it as (like "Who Dares Wins") it was released without their consultation let alone consent. Furthermore, it has been alleged that the band has not received royalties from Earache for a number of years

Bolt Thrower recently announced that as they were totally satisfied with the "" album, they will be indefinitely postponing the recording of another LP, as their goal was always to stop after releasing "the perfect Bolt Thrower album". [ [http://www.boltthrower.com/news/news.php Official Bolt Thrower website News Section] ]

*, a popular artist from the hardcore/ electronic music genre, released an LP in 2005 titled "Grindkrusher". It almost exclusively features samples and remixes of various Bolt Thrower recordings, as well as a song entitled "".
*A Bolt Thrower tribute project was created in the late 1980s. One tape was produced titled "Colt-Thrower - Under the Sign of the Black Horse" It was released on cassette only, and 30 copies were produced. The idea was a Christmas present to the band members. It consists of the tracks "Intro", "Through the Eye of Jap", "Dwarf in Torment" and "Outro".
*The ese band used the Bolt Thrower band logo for the promotional poster of "" 2006.
* performed spoken word lyrics as a guest in the song "Resurrected for Massive Torture" on their album "Armageddon March Eternal (Symphonies of Slit Wrists)".