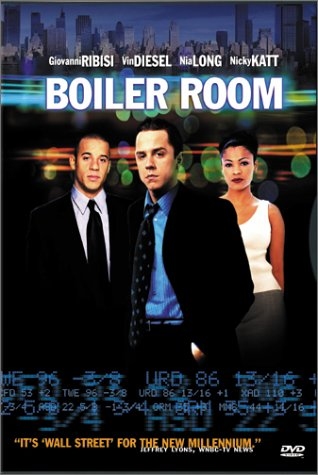 
"Boiler Room" is a 2000 U.S. drama, written and directed by , and starring , and . Other characters in the film were played by , , , (who also starred in "" with Ribisi), and . The film reunited Giovanni Ribisi and Vin Diesel who both had supporting roles in "".

The film takes a look at the world of "boiler room" (seedy, dishonorable) brokerage firms. The film centers around college dropout Seth Davis (Ribisi), a budding underground casino owner in Queens whose life turns upside down when offered employment at J.T. Marlin, a less-than-reputable brokerage firm. Davis' opposition to his disapproving federal judge father drives the plot as Davis goes deeper into the operation at J.T. Marlin than he'd like, learning how the firm scams its clients. The company is a chop shop brokerage firm that runs a "", using its brokers to create in the stock of defunct companies by cold calling investors and selling them shares at prices set by the brokerage firm, which include a large commission to the brokers (up to three dollars a share for a ). When the firm is done pumping the stock, the investors then have no one to sell their shares to in the market, and the price of the stock plummets. As Seth learns more about the firm, he realizes he needs to get out. When the FBI confronts him, he agrees to help them bring down the firm. Although he feels bad about the many affluent investors (whales) that he lied to and scammed, he only tries to help one client who could not afford to be scammed in the first place.

This was based on real events [ [http://www.finra.org/Newsroom/NewsReleases/1998/P010421 NASD Regulation Continues Microcap Market Focus; Complaints Name Brokers at Greenway Capital and Kensington Wells] press release] . In the early and mid '90s Ben Younger worked for a brokerage firm called Kensington Wells in Mineola, NY, and conceived the idea that went on to become his first film, "Boiler Room". He spent a few years there and based the background for his screenplay on Matt DiMicco, one of the supervisors at Kensington at the time. DiMicco was Italian and had a crush on a sexy black sales assistant named Gail Kennard. These influenced to the point, the characters of Nicky Katt "DiMicco" and Nia Long "Kennard". The federal judge aspect of that film was based on one of the principals of Kensington was avoided jail because his own father was a retired judge from Long Island and had many connections to get his son, Adam Levy out of jail. Many of these people in real life were busted by the SEC and the US Attorneys office for wire fraud, mail fraud, extortion, stock fraud and many other crimes.

The DVD release includes an alternate ending that implies a rampage massacre in the final scene by the aforementioned financially disgruntled victim in the story, who was planning on buying a house with their lost money.

The film is often compared to "Glengarry Glen Ross" and "Wall Street", and both movies are quoted -- by name and with lines of dialogue -- by characters in the film, and in one instance a whole scene (from "Wall Street") is recited by the characters as they watch it on video. Alec Baldwin's character in Glengarry is often quoted by Ben Affleck's character.