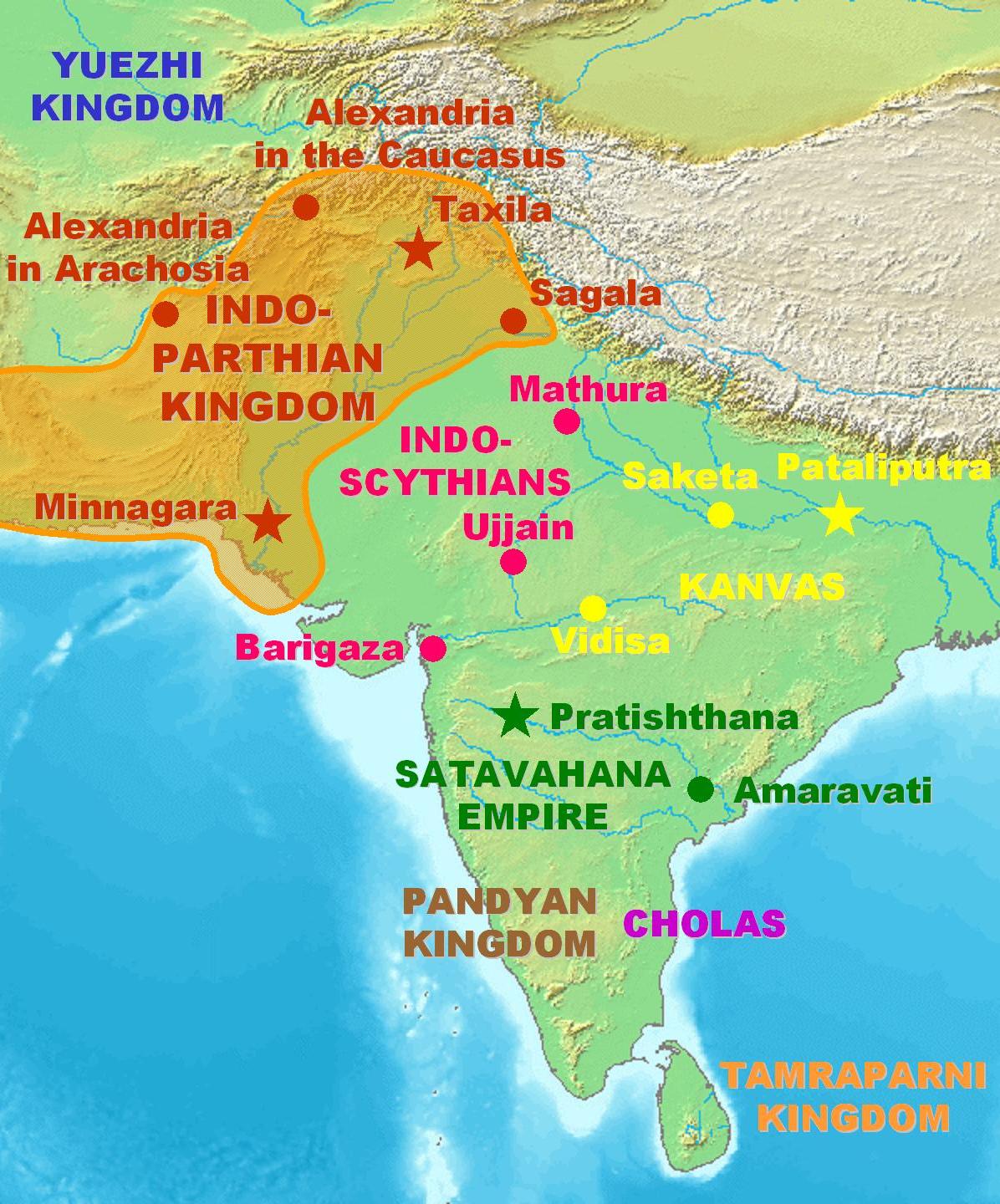 image_map_caption = Territories (full line) of the Indo-Parthian Kingdom at its greatest extent.
capital =

The Indo-Parthian Kingdom was established during the by , and at its greatest extent extended into areas that are in present-day , and Northern .

For most of its history, the capital of the kingdom was at (in present-day Pakistan), but during the last few years of its existence the capital was at (present-day Afghanistan).

Around , , a vassal of the Parthian Arsacids, declared his independence from the Parthian empire and established the Indo-Parthian kingdom in the conquered territories.

The kingdom barely lasted one century. It started to fragment under Gondophares' successor Abdagases. The northern Indian part of the kingdom was retaken by the around .

After that point the kingdom was essentially restricted to Afghanistan. The last king ( - ) only ruled and Turan.

The Parthians ended up controlling extensive territories in Northern India, after fighting many local rulers such as the ruler , in the region. Gondophares was the ruler of areas comprising , , , , and the valley, but it does not seem he held territory east beyond the Punjab. [Rosenfield, p129]

Some ancient writing describe the presence of the Parthians in the area, such as the story of Saint , who was recruited as a carpenter to serve at the court of king "Gudnaphar" (thought to be Gondophares) in India. The describes in chapter 17 Thomas' visit to king in northern India; chapters 2 and 3 depict him as embarking on a sea voyage to India, thus connecting Thomas to the west coast of India.

The Greek philosopher is related by in "" to have visited India, and specifically the city of around 46 CE. He describes constructions of the Greek type, [Description of the Hellenistic urbanism of Taxila:
* "Taxila, they tell us, is about as big as Nineveh, and was fortified fairly well after the manner of Greek cities" [http://www.livius.org/ap-ark/apollonius/life/va_2_16.html#§20 (Life of Apollonius Tyana, II 20)]
*"I have already described the way in which the city is walled, but they say that it was divided up into narrow streets in the same irregular manner as in Athens, and that the houses were built in such a way that if you look at them from outside they had only one story, while if you went into one of them, you at once found subterranean chambers extending as far below the level of the earth as did the chambers above." [http://www.livius.org/ap-ark/apollonius/life/va_2_21.html#§23 (Life of Apollonius Tyana, II 23)] ] probably referring to , and explains that the king of Taxila, named , received a Greek education at the court of his farther and spoke Greek fluently:

:"Tell me, O King, how you acquired such a command of the Greek tongue, and whence you derived all your philosophical attainments in this place?" [ [http://www.livius.org/ap-ark/apollonius/life/va_2_26.html#§29 (Life of Apollonius Tyana, II 29)] ] : [...] -"My father, after a Greek education, brought me to the sages at an age somewhat too early perhaps, for I was only twelve at the time, but they brought me up like their own son; for any that they admit knowing the Greek tongue they are especially fond of, because they consider that in virtue of the similarity of his disposition he already belongs to themselves." [ [http://www.livius.org/ap-ark/apollonius/life/va_2_31.html#§31 (Life of Apollonius Tyana, II 31)] ]

The is a surviving 1st century guide to the routes commonly being used for navigating the Arabian Sea. It describes the presence of Parthian kings fighting with each other in the area of Sindh, a region traditionally known at that time as "Scythia" due to the previous rule of the Indo-Scythians there:

:"This river () has seven mouths, very shallow and marshy, so that they are not navigable, except the one in the middle; at which by the shore, is the market-town, Barbaricum. Before it there lies a small island, and inland behind it is the metropolis of Scythia, Minnagara; it is subject to Parthian princes who are constantly driving each other out." Periplus of the Erythraean Sea, Chap 38 [ [http://www.fordham.edu/halsall/ancient/periplus.html Periplus of the Erythraean Sea, Chap 38] ]

An inscription from Takht-i-Bahi near bears two dates, one in the regnal year 26 of the Maharaja Guduvhara (again thought to be Gondophares), and the year 103 of an unknown era. [Rosenfield, p130.]

The Indo-Parthians seemingly occupied the area of between around 20 CE, when Gondophares took over from the , to around 60 CE, when Kujula Kadphises established Kushan rule there.

To the contrary of the Indo-Greeks or Indo-Scythians, there are no explicit records of Indo-Parthian rulers supporting Buddhism or Hinduism, such as religious dedications, inscriptions, or even legendary accounts. Also, although Indo-Parthian coins generally closely follow Greek numismatics, they never display the Buddhist symbol (apart from the later ), nor do they ever use depictions of the elephant or the bull, possible religious symbols which were profusely used by their predecessors.

On their coins and in the art of Gandhara, Indo-Parthians are depicted with short crossover s and large baggy trousers, possibly supplemented by chap-like over-trousers. [Described in "Rome's enemies, Parthians and Sassanid Persians", ISBN 0-85045-688-6] Their jackets are adorned with rows of decorative rings or medals. Their hair is usually bushy and contained with a headband, a practise largely adopted by the Parthians from the 1st century CE. ["Parthians, from about the 1st century AD, seem to have preferred to show off their carefully tonsured hair, usually only wearing a fillet of thick ribbon; before then, the Scythian cap or was worn more frequently". In "Parthians and Sassanid Parthians" Peter Willcox ISBN 0850456886, p12]

Individual Indo-Parthians are sometimes shown as actors in Buddhist devotional scenes. It is usually considered that most of the excavations that were done at near by John Marshall relate to Indo-Parthian layers, although more recent scholarship sometimes relates them to the instead. [Pierfrancesco Gallieri, in "Crossroads of Asia": "The parallels are so striking that it is not excluded that the objects discovered in Taxila and dated to between the 1st century BCE and the 1st century CE were in reality produced earlier, maybe by artisans who had followed the Greeks kings during ther retreat from Bactria to India" p211 (in French in the original)] These archaeological researches provided a quantity of Hellenistic artifacts combined with elements of Buddhist worship (s). Some other temples, such as nearby Jandial may have been used as a Zoroastrian .

The statues found at Sirkap in the late Scythian to Parthian level (level 2, 1-60 CE) suggest an already developed state of Gandharan art at the time or even before Parthian rule. A multiplicity of statues, ranging from Hellenistic gods, to various Gandharan lay devotees, are combined with what are thought as some of the early representations of the Buddha and Bodhisattvas. Today, it is still unclear when the of exactly emerged, but the findings in Sirkap do indicate that this art was already highly developed before the advent of the s.

Numerous s found in Gandhara are considered as good representatives of Indo-Parthian art. These palettes combine Greek and Persian influences, together with a frontality in representations which is considered as characteristic of Parthian art. Such palettes have only been found in archaeological layers corresponding to Indo-Greek, Indo-Scythian and Indo-Parthian rule, and are essentially unknown the preceding Mauryan layers or the succeeding Kushan layers. ["Let us remind that in , stone palettes were found at all excavated levels. On the contrary, neither Bhir-Mound, the city preceding Sirkap on the site, nor Sirsukh, the city succeeding her, did deliver any stone palettes during their excavations", in "Les palettes du Gandhara", p89. "The terminal point after which such palettes are not manufactured anymore is probably located during the Kushan period. In effect, neither nor Taxila (although the Sirsukh had only been little excavated), nor , nor , neither the great Kushan archaeological sites of Soviet or have yielded such objects. Only four palettes have been found in Kushan-period archaeological sites. They come from secondary sites, such as Garav Kala and Ajvadz in Soviet Tajikistan and Jhukar, in the Indus Valley, and Dalverzin Tepe. They are rather roughly made." In "Les Palettes du Gandhara", Henri-Paul Francfort, p91. (in French in the original)]

Very often these palettes represent people in Greek dress in mythological scenes, but a few of them represent people in Parthian dress (head-bands over bushy hair, crossed-over jacket on a bare chest, jewelry, belt, baggy trousers). A palette from the in shows an Indo-Parthian king seated crossed-legged on a large sofa, surrounded by two attendants also in Parthian dress. They are shown drinking and serving wine.

Some pocket of Parthian rule remained in the East, even after the takeover by the Sassanids in . From the 2nd century several Central-Asian Buddhist missionaries became in the Chinese capital cities of and sometimes , where they particularly distinguished themselves by their translation work. The first known translators of Buddhist texts into Chinese are actually Parthian missionaries, distinguished in Chinese by their Parthian surname "An", for "Anshi", "country of the ".
*, was a n prince, who made the first known translations of Buddhist texts into Chinese (148-170).
*An Hsuan, was a Parthian merchant who became a monk in China 181
* (c.254), a Parthian monk.
* (281-306), a monk of Parthian origins.

There are some claims based on historical, anthropological, and linguistic evidence indicating that the Southern Indian kingdom of the was originally founded by the , either from or from the territories of the in north-werstern India, also called "" in Indian litterature. ["India: the ancient past", Burjor Avari, p.186] These Pahlavas of descent would have migrated Southward and first settled in valley of present day coastal . This region is called or Pallavanadu even today. Pallavas later extended their sway up to Northern Tamil region and established a flourishing empire.