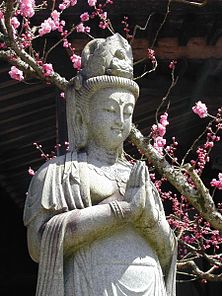 In Asia, many points of good etiquette are derived from religious beliefs. This Kannon statue (known elsewhere as Kuan Yin) stands on Mt. Koya, Japan.

As expectations regarding good manners differ from person to person and vary according to each situation, no treatise on the rules of etiquette nor any list of faux pas can ever be complete. As the perception of behaviors and actions vary, intercultural competence is essential. However, a lack of knowledge about the customs and expectations of Asian people can make even the best intentioned person seem rude, foolish, or worse.

In many situations, an emphasis is placed on promptness and appropriate attire. Breaking social commitments, such as appointments or even casual plans to meet with friends, can be a serious faux pas. Preventing another person from keeping a commitment, especially with family, is rude as well.[citation needed]

Special respect is paid to older people in many circumstances. This can include standing when older people enter a room, always greeting older people before others present (even if they are better known to the speaker), standing when speaking to one’s elders and serving older people first at a meal table. Touching the head, shoulders or back of an older person can be considered disrespectful, even if the intent is to comfort or indicate affection. Older people are rarely referred to by first names; they are addressed with such honorifics as Mr. and Mrs. or the appropriate non-English equivalents. Sometimes terms such as "Uncle" or "Auntie" are appropriate for older non-relatives.[citation needed]

For example, the young people (in China) will call an older person as "Ye Ye" (grandfather), and "Nai Nai" (grandmother), "Ah Yi" (aunt), and "Shu Shu" (uncle) as a sign of respect even if that person is not family by blood.[citation needed]

In India, elders are given priority over younger people in a range of social settings. For example, it is impolite for a young person to be sitting while an elder is standing, in this case, even if there is a free seat, the young person will offer their seat to the elder in concern. Another example would be if an elder is carrying something of considerable weight, and a young person has their hands free, it is expected of the young person to offer assistance to the elder in concern. As with all other Asian cultures, young people in India address any older unrelated person by the closest plausible relation i.e. a slightly older person of the same generation may be referred to as elder brother, or elder sister in the respective language while an elderly person may be referred to as auntie, uncle, grandpa or grandma as appropriate, again in each respective language. As with many other Asian lingual spheres, Indian languages follow strict honorifics that must be abided by.[citation needed] 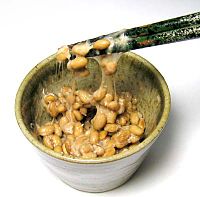 Even unskilled users should observe good etiquette when using chopsticks.

Gesturing with chopsticks or using them to skewer food are actions that are seen as rude. Leaving chopsticks standing in a bowl of rice or other food is a faux pas based on the resemblance to sticks of incense in a bowl used to honour the dead ancestors. Etiquette further forbids tapping chopsticks against the side of a bowl, or crossing one’s chopsticks with those of someone else.[citation needed]

Behaviours associated with humility, status and pride are very important in some Asian societies. Etiquette might demand that a great cook or artist deprecate their own achievement in a way that might be viewed negatively as "fishing for compliments" or false modesty in the West. Situations in some Asian societies allow for displays of wealth or ability that would be uncomfortably ostentatious or in bad taste in Western societies.[citation needed]

Certain customs regarding good and bad luck are important to many Asian people. These customs may be regarded as superstitions by many, but they are often tied to religious traditions and are an important part of certain belief systems, even among the well-educated and affluent sectors of society.[citation needed]

Traditionally, shoes are not worn in households in nations such as India, Indonesia, Japan, Korea, Philippines, Thailand, Malaysia, and Vietnam, nor in certain holy places elsewhere, such as mosque and many Buddhist or Hindu temples. The typical expectation is that shoes will be removed in the foyer and left neatly with toes pointing outside. Socks or stockings should be very clean and in good condition. In regions where shoes are not worn in houses, these rules also apply to restaurants, except those with Western-style tables and chairs.[citation needed]

Specific details which may contradict the aforementioned generalisations are listed in the list here below.

Many countries in this region have traditions based on Islam and share values with other parts of the Muslim world. Guidelines regarding etiquette in the Middle East are often applicable to Central Asia as well. This holds especially true in Muslim majority countries such as: 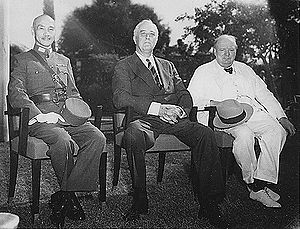 When East meets West, differences in traditions surrounding etiquette can be a barrier. In this picture Chiang Kai-shek, Franklin D. Roosevelt, and Winston Churchill meet during World War II. 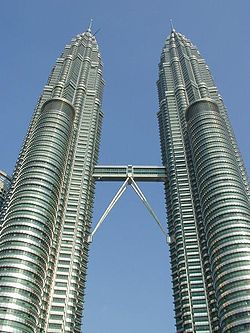 Some Westerners know little about Southeast Asian countries like Indonesia and Malaysia, economically well-developed nations that are home to many of the world's Muslims. Shown here are the Petronas Twin Towers in Kuala Lumpur, together forming one of the tallest buildings in the world.

Tipping is customary in Brunei, Indonesia and Malaysia. Consult the locals as to the usual rate. Tips apply to anyone who offer a service: toilet attendants, drivers, grocery-store clerks. Be generous, but do not exceed too far the usual local accepted rate. A tip of 5-15% of total bill at small eateries, where the bill does not specify a service charge is adequate. Most all restaurants will include a 10% service charge in the bill. Hotels and fine restaurants will usually include a service charge, and it is the discretion of the buyer to tip.Tipping at Mammak (Indian Muslim coffee shops) shops or hawker(food stalls) is not done. The general rule among the Javanese is that the truly wealthy are inconspicuous; the wealthier one is or wishes to appear, the more generously one gives, discretion being the better part of valor.

For more details on this topic, see Etiquette in Japan.

Japanese customs and etiquette can be especially complex and demanding. The knowledge that non-Japanese who commit faux pas act from inexperience can fail to offset the negative emotional response some Japanese people feel when their expectations in matters of etiquette are not met. 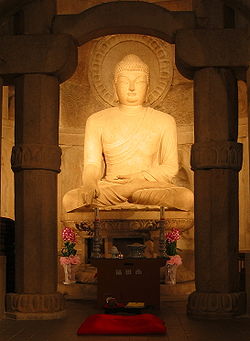 Like many Asian people, Koreans observe points of etiquette related to local forms of Buddhism. Depicted here is one of the National Treasures of South Korea, the magnificent Buddha statue at Seokguram Grotto. 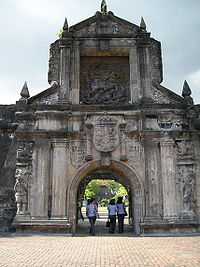 The Philippines are named for Philip II of Spain and centuries of Spanish rule left an indelible mark on Filipino customs and society. Shown here is the Gate of Fuerza de Santiago in Manila.

Influenced during its history by centuries of Spanish rule and the U.S., and a lively influx of influences from around Japan, China, India, Middle East, and the West, the Philippines has a unique and particularly formal sense of etiquette concerning social functions, filial respect and public behavior.

The use of these respectful words is sometimes considered to be a fundamental tenet in local etiquette, especially when taught to children, and is also admirable in a child if he/she makes use of this in conversation with adults. However, this rule may not always apply to non-Tagalog speaking regions. 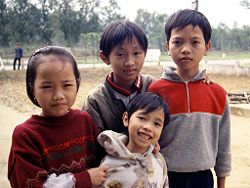 Many Asian societies teach children to obey and respect their elders to an extent that is rare in contemporary Western societies. Shown here is a group of children in central Vietnam.