Sprite is a transparent, lemon-lime flavored, caffeine free soft drink, produced by the Coca-Cola Company. It was introduced in the United States in 1961. This was Coke's response to the popularity of 7 Up, which had begun as "Bib-Label Lithiated Lemon-Lime Soda" in 1929. It comes in a primarily silver, green, and blue can or a green translucent bottle with a primarily green and blue label. In 1978, Sprite became the market leader position in the lemon soda category.

Sprite was introduced to the United States in 1961 to compete against 7 Up. Early magazine advertisements promoted it as a somewhat sophisticated, tart and not-too-sweet drink mixer, to be used (similar to tonic water or ginger ale) with alcoholic beverages such as whiskey and vodka[citation needed]. In the 1980s, many years after Sprite's introduction, Coke pressured its large bottlers that distributed 7 Up to replace the soda with the Coca-Cola product. In a large part due to the strength of the Coca-Cola system of bottlers, Sprite finally became the leader position in the lemon soda category in 1978.[citation needed]. Since the 1990s, Sprite has sponsored the NBA and used players in its advertising campaigns. Players sponsored have included Kobe Bryant, Tim Duncan, Lebron James, and Grant Hill. 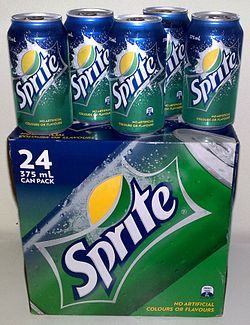 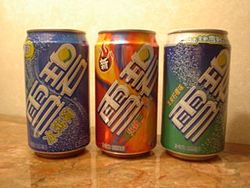 Sprite cans from China. From left to right, Sprite Icy Mint, Sprite on Fire, and Sprite.

Sprite's slogans in the 1960s and 1970s ranged from "Taste Its Tingling Tartness", "Naturally Tart" and "It's a Natural!". A song known as "Sprite" or "Melon-ball Bounce" was originally composed by Raymond Scott for a Sprite radio commercial around 1963, that references the "ice-tart taste" of Sprite. By the 1980s Sprite began to have a big following among teenagers, so in 1987 marketing ads for the product were changed to cater to that demographic. "I Like the Sprite in You" was their first long-running slogan. Many versions of the jingle were made during that time to fit various genres. The slogan was used until 1994.

In 1994, Sprite created a newer logo that stood out from their previous logos. The main coloring of the product's new logo was blue blending into green with silver "splashes", and subtle small white bubbles were on the background of the logo. The word "Sprite" had a blue backdrop shadow on the logo, and the words "Great Lymon Taste!" were removed from the logo. This was the official US logo until 2007. During 1994, the slogan was also changed to "Obey Your Thirst" and was set to the urban crowd with a hip-hop theme song. One of the first lyrics for the new slogan were, "Never forget yourself 'cause first things first, grab a cold, cold can, and Obey your thirst."

Toward the late 1990s, most of Sprite's advertisements featured amateur and famous basketball players. The tagline for most of these ads was, "Image is nothing. Thirst is everything. Obey your thirst."

In 1998, one infamous commercial poked fun at products with cartoon mascots. In the commercial, a mother serves up two glasses of a fictitious product called "Sun Fizz" for her children. The children are thrilled, saying that it's their favorite. Then the product's mascot, a sun character with blue eyes, a red bow tie, and a high-pitched Mickey Mouse-like voice, pops out saying that "there's a delicious ray of sunshine in every drop." The mother and her children scream in horror and run while the sun character chases them around the house asking why they're running from him. After the mom trips and tells her children to keep running, the viewer is left to wonder what will happen to her. Finally, the commercial's message is given: "Trust your gut, not some cartoon character."[2]

In the 1990s, one of Sprite's longest-running ad campaigns was "Grant Hill Drinks Sprite" (overlapping its "Obey Your Thirst" campaign), in which the well-liked basketball player's abilities, and Sprite's importance in giving him his abilities, were humorously exaggerated.[3][4]

Also in the 1990s, Sprite launched the short-lived but memorable "Jooky" ad campaign. The 30-second television spots poked fun at other soft drinks' perceived lack of authenticity, ridiculous loyalty programs and, in particular, the grandiose, bandwagon-driven style of advertising popular among other soft drink manufacturers, notably Pepsi. The tagline for these spots was "Image is nothing. Thirst is everything. Obey your thirst."[5][6]

In 2000, Sprite commissioned graffiti artist Temper to design a limited edition can which saw the design on 100 million cans across Europe.

In 2004, Coke created Miles Thirst, a vinyl doll voiced by Reno Wilson, used in advertising to appeal to the hip-hop market.[7]

In 2005, a new Sprite logo, consisting of two yellow and green "halves" forming an "S" lemon/lime design, began to make its debut on Sprite bottles and cans. The slogan was changed from its long-running "Obey Your Thirst" to just "Obey". The advertisement themes received their first major change for this decade as well. This design was rarely used in the UK, using instead a revamped version of the previous logo.

Sprite's ads, developed by Crispin Porter + Bogusky featured several fast subliminal scenes and messages that can be pointed out when played back in slow motion. As with most modern commercials, many of these videos can be seen online. The "Sublymonal" campaign was also used as part of the alternate reality game The Lost Experience.[8] This also resurrected the "lymon" word.

Sprite redesigned their label in April 2009, removing the aforementioned "S" logo after just two years. The new design, which features yet another new revision of the main Sprite logo, bears much resemblance to the 1994 revamp. Sprite Zero bottles from this era feature grey packaging, a first for the brand.

In the UK, it is recognized by its slogan "Get the Right Sprite", based on ads containing an alternative sprite, a green sickly goblin that causes irritation and trouble to those who acquire it accidentally. In the new, 2010 commercial, Drake, entertainer and rapper, starred in it.

Available in the following Countries