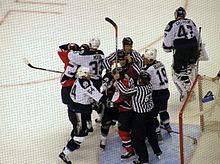 Violence has been a part of ice hockey since at least the early 1900s. According to the book Hockey: A People's History, in 1904 alone, four players were killed during hockey games from the frequent brawls and violent stickwork.[1]

More modern examples of violence include brawls, fan involvement, physical abuse of officials, and deliberately injuring opponents. Violent actions, such as kicking, hitting from behind, and prohibited stickwork, are penalized with suspensions or fines. Fighting, or fisticuffs, is also penalized but is considered by many hockey enthusiasts, particularly in North America, to be quite distinct from stick-swinging or other violent acts. They regard fighting as an entrenched, acceptable and important part of the game.

On the ice, referees may impose penalties for prohibited activities. Off the ice, the National Hockey League (NHL) sometimes fines, suspends, or expels players. The criminal justice system has also been known to investigate, charge, and convict players.

Early hockey in particular was noted for its extreme violence, to the point where two players were killed in three years during brawls. In both cases, the accused assailants were acquitted, but these and other bloody incidents led to calls for the sport to clean up its act or be banned with the likes of cockfighting.[2] The worst of the violence waned, particularly with regulations for quasi-legal fisticuffs, though incidents continue to occur from time to time.

Billy Coutu was the first, and to date only, player banned from the NHL for life for violence in 1927; he assaulted referee Jerry Laflamme and tackled referee Billy Bell before starting a bench-clearing brawl during a Stanley Cup game between the Boston Bruins and Ottawa Senators, apparently on the orders of Bruins coach Art Ross. The NHL's first president, Frank Calder, expelled Coutu from the NHL for life; the ban was lifted after 2½ years, but Coutu never played in the NHL again.

Players who are banned in the American Hockey League for violence are not permitted in the ECHL, and vice versa, because of their agreements with the Professional Hockey Players' Association.

All of these incidents are in the NHL of the United States and Canada unless noted otherwise.