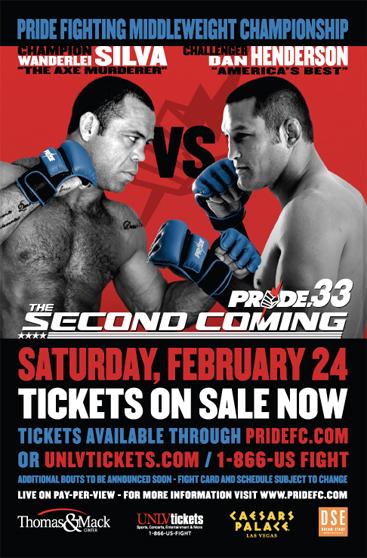 "PRIDE 33: The Second Coming" [cite web
url=http://www.prideofficial.com/free/ticket/pride33.html
title=PRIDE official site
accessdate=2007-01-03
year=
publisher=
language=Japanese] was a event held by on , at the in . In the night's main event welterweight champion knocked out PRIDE Middleweight Champion , stripping him of his title to become the new middleweight champion.

A fight between and was submitted for approval by the (NSAC). However, the fight did not take place after Yvel was denied a fighter's license by the NSAC based on a history of disqualification from multiple fights, most notably, his infamous attack on a referee. [cite web
url=http://www.sherdog.com/news/news.asp?n_id=6780
title=License To Fight: Busy Morning For The NSAC
accessdate=2007-02-13
date=
publisher=] Kharitonov instead fought defeating him with an armbar.

A fight between Wes Sims and was proposed but the NSAC turned it down due to competitive reasons&mdash;the fighters were at unequal experience/talent levels. After that a Wes Sims- fight was turned down as well. The NSAC confirmed that Fujita would not be fighting anyone on the PRIDE 33 card as the deadline for receiving fighters over the age of 35 (Fujita is 36) medical records had passed (they must be submitted one week before the show so they can be properly reviewed and cleared). [cite web
url=http://www.mmaweekly.com/absolutenm/templates/dailynews.asp?articleid=3452&zoneid=13
title=In Depth Coverage: Hearings for Randleman, Yvel, Alves, Toughill and Carvahlo
last=Trembow
first=Ivan
accessdate=2007-02-16
date=
publisher=MMA Weekly]

Travis Wiuff's original opponent, , did not fight due to a knee injury.

Joachim Hansen defeated Jason Ireland at 2:33 into the third round via armbar. [cite web
url=http://www.mmaweekly.com/absolutenm/templates/dailynews.asp?articleid=3391&zoneid=13
title=Joachim Hansen signs to fight for PRIDE in US
date=
accessdate=2007-02-06
publisher=MMA Weekly]

James Lee defeated Travis Wiuff at :39 into the first round via guillotine choke. [cite web
url=http://www.mmaweekly.com/absolutenm/templates/dailynews.asp?articleid=3479&zoneid=13
title=Wiuff Will Make His PRIDE Debut After All
date=
accessdate=2007-02-22
publisher=MMA Weekly]

Sergei Kharitonov defeated Michael Russow at 3:46 into the first round via an armbar from the guard.

In a rematch from , Mauricio Rua defeated Alistair Overeem via knockout at 3:37 into the first round. [cite web
url=http://www.pridefc.com/pride2005/index_new_temp.php
title=PRIDE official website
date=
accessdate=2007-01-29]

Former UFC fighter Nick Diaz upset the PRIDE lightweight champion Takanori Gomi via a submission in the second round. However, the result was later changed to No-Contest by the after Diaz tested positive for marijuana in a post fight drug test. [cite web
url=http://www.sherdog.com/news/articles.asp?n_id=7231
title=NSAC Changes Diaz Win to No-Decision
date=
accessdate=2007-04-10
last=Gross
first=Josh
publisher=Sherdog.com] The hotly contested fight, which saw Gomi knocking down Diaz in the first round, was a non-title fight, so Gomi remained the champion. It was only the second time the gogoplata finishing hold has been successfully used in a Pride event, the first being vs. . [cite web
url=http://www.mmaweekly.com/absolutenm/templates/dailynews.asp?articleid=3467&zoneid=13
title=Gomi Ready For Diaz & Las Vegas Debut
date=
accessdate=2007-02-22
last=Mendoza
first=Ricardo
publisher=MMA Weekly]

Dan Henderson defeated Wanderlei Silva via knockout, finishing him with a left hook set up by a spinning back fist [http://www.presstelegram.com/sports/ci_5300886] at 2:08 in the third round. In becoming the new PRIDE middleweight champion