Their assignment is the protection of members of the U.S. federal government overseas, particularly at U.S. embassies and consulates. Fighting kidnapping and terrorism are part of their duties, as well as protection and evacuation of U.S. citizens out of crisis areas and training of personnel in foreign countries.

MSD is based in Dunn Loring, Virginia and consists of a headquarters element, tactical medical staff, training cadre, logistic staff, and 10 operational teams with six agents each. The teams three primary missions are: 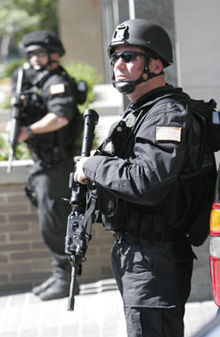 MSD cooperates closely with other federal agencies, such as the Secret Service, the Fleet Antiterrorism Security Teams of the United States Marine Corps, the Federal Bureau of Investigation and local law enforcement agencies, both domestic and foreign.

MSD agents are selected from DSS agents who voluntarily want to join the specialized unit. These agents are expected to maintain more stringent shooting standards than their peers in DS. Beginning with an initial assessment, the training duration is six months and is held in and around the Diplomatic Security Training Center (DSTC) in Northern Virginia and West Virginia. The curriculum is based upon advanced weapon handling and Close Quarters Battle (CQB) tactics, counter-terror and off-road car handling, advanced navigation, precision shooting, first aid and tactics. The training culminates in an elaborate detention and personal security scenario. Throughout their three-year tour at MSD, agents continue to train at DS schools, and specialized tactics schools all over the United States. MSD also participates in joint military exercises to ensure interoperability in many places where the U.S. Department of State and U.S. Military work together. Upon completion of their tour, MSD agents return to DSS posts in the U.S. and overseas.

MSD trains in helicopter operations, but does not have its own dedicated air assets. Rather, MSD uses the U.S. Department of State's globally deployed contract air assets as well as U.S. military air in certain theatres.

Garments, weapons and communication devices of the MSD are always state of the art.[2] MSD uniforms are tailored to the mission, and may comprise a Tru-Spec or other battle dress, uniform (BDU), or low-profile civilian clothing, the latter of which is more commonly used in SST and MTT missions. MSD agents use Kevlar helmets, ballistic protective glasses such as Oakleys, body armor, gas masks, radio transceivers with headphones, tactical first aid kits, ballistic vests, various hydration systems, current-generation night vision goggles and GPS handheld devices such as Garmin 60cx, and other geolocation equipment. MSD agents stay current in military and DSS communications systems in order to remain interoperable with other agencies and military units. Since 2009, MSD has made equipment upgrades based on experiences in the Middle East.

Diplomatic Security MSD agents were involved in Bosnia and Liberia[2] protecting U.S. diplomatic missions and arresting terrorists, as well as the investigation of terrorists bombings in a United States Army barracks in Dhahran, Saudi Arabia in 1996 and the 1998 United States embassy bombings in Tanzania and Kenya. More recent missions have included operations in Iraq, Afghanistan, Haiti, Pakistan, Jamaica, and in various other countries conducting MTTs such as Mexico.[3]