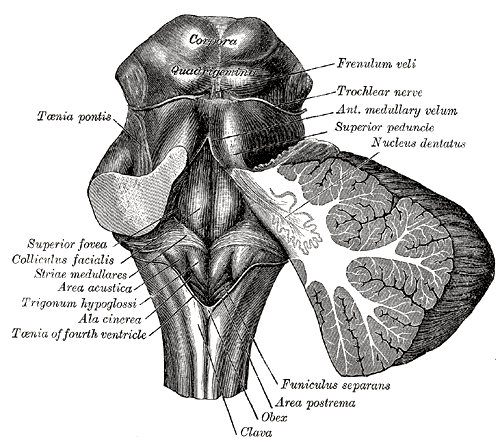 Caption = Rhomboid fossa. (Locus ceruleus not labeled, but region is very near colliculus facialis, which is labeled at center left.)

The locus ceruleus was first discovered by .

"Caeruleus" is the classical Latin spelling, but "coeruleus", a more archaic form, is the more common spelling. The spelling "ceruleus", formed by contraction of the diphthongs ae or oe into e, is an American English form.

The locus ceruleus (or "LC") is located within the dorsal wall of the rostral in the lateral floor of the . This nucleus is the principal site for synthesis of in the brain, and is composed of mostly medium-size neurons. granules inside the LC contribute to its blue color; it is thereby also known as the nucleus pigmentosus pontis, meaning "heavily pigmented nucleus of the pons." The is formed by the of norepinephrine and is analogous to the black -based neuromelanin in the .

The projections of this nucleus reach far and wide, innervating the spinal cord, the brain stem, , hypothalamus, the thalamic relay nuclei, the amygdala, the basal telencephalon, and the cortex. The norepinephrine from the LC has an excitatory effect on most of the brain, mediating arousal and priming the brain’s neurons to be activated by stimuli. It has been said that a single noradrenergic neuron can innervate the entire cerebral cortex via its branches.

As an important homeostatic control center of the body, the locus ceruleus receives from the . The and the also innervate the LC, allowing emotional pain and stressors to trigger noradrenergic responses. The cerebellum and afferents from the also project to the LC, particularly the raphe pontis and raphe dorsalis.

The locus ceruleus receives inputs from a number of other brain regions, primarily:
* , whose connection is constant, excitatory, and increases in strength with raised activity levels in the subject
* , which integrates and environmental stimuli
* , which is involved in gaze
* Lateral , which releases , which, as well as its other functions, is excitatory in the locus ceruleus.

The locus ceruleus is studied in relation to , panic disorder, and . Some antidepressant medications including , , and , as well as medication , are believed to act on s in this area. This area of the brain is also intimately involved in .

Psychiatric research has documented that enhanced noradrenergic postsynaptic responsiveness in the neuronal pathway (brain circuit) that originates in the locus ceruleus and end in the basolateral nucleus of the is a major factor in the pathophysiology of most stress-induced fear-circuitry disorders and especially in (PTSD). The LC neurons are probably the origin of the first or second “leg” of what has been recently termed the "PTSD candidate circuit." Combat-related PTSD (in a 2005 study of deceased American army veterans from World War II) was shown to be associated with a postmortem diminished number of neurons in the locus coeruleus (LC) on the right side of the brain. [cite journal |author=Bracha HS, Garcia-Rill E, Mrak RE, Skinner R |title=Postmortem locus coeruleus neuron count in three American veterans with probable or possible war-related PTSD |journal=The Journal of neuropsychiatry and clinical neurosciences |volume=17 |issue=4 |pages=503–9 |year=2005 |pmid=16387990 |doi=10.1176/appi.neuropsych.17.4.503] The role of the LC in PTSD may explain the dramatic effectiveness of two generic medications, and for the secondary prevention and treatment of PTSD, respectively.Fact|date=February 2007

The locus ceruleus is responsible for mediating many of the sympathetic effects during stress. The locus ceruleus is activated by stress, and will respond by increasing secretion, which in turn will increase cognitive function (through the ), increase motivation (through ), activate the , and increase the sympathetic discharge/inhibit parasympathetic tone (through the ). Specific to the activation of the hypothalamo-pituitary adrenal axis, norepinephrine will stimulate the secretion of from the , which induces release from the and subsequent cortisol synthesis in the . Norepinephrine released from locus ceruleus will feedback to inhibit its production, and corticotropin-releasing hormone will feedback to inhibit its production, while positively feeding to the locus ceruleus to increase norepinephrine production.

* [http://faculty.etsu.edu/currie/ras.htm "A Lecture, Higher Brain Function: Activation of the Brain and Levels of Consciousness"] at
*
* [http://homepage.psy.utexas.edu/homepage/class/Psy301/Salinas/sec2/Brain/31.gifDiagram] at
* [http://www.healthsystem.virginia.edu/internet/pediatrics/hcp/adhdbrainanatomy.cfm Diagram] at
* http://www2.umdnj.edu/~neuro/studyaid/Practical2000/Q45.htm