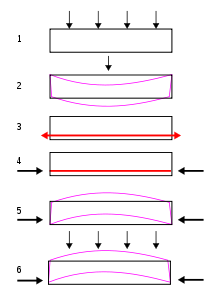 Prestressed concrete is a method for overcoming concrete's natural weakness in tension. It can be used to produce beams, floors or bridges with a longer span than is practical with ordinary reinforced concrete. Prestressing tendons (generally of high tensile steel cable or rods) are used to provide a clamping load which produces a compressive stress that balances the tensile stress that the concrete compression member would otherwise experience due to a bending load. Traditional reinforced concrete is based on the use of steel reinforcement bars, rebars, inside poured concrete. 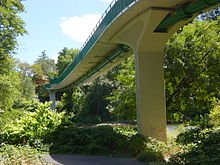 Pre-tensioned concrete is cast around already tensioned tendons. This method produces a good bond between the tendon and concrete, which both protects the tendon from corrosion and allows for direct transfer of tension. The cured concrete adheres and bonds to the bars and when the tension is released it is transferred to the concrete as compression by static friction. However, it requires stout anchoring points between which the tendon is to be stretched and the tendons are usually in a straight line. Thus, most pretensioned concrete elements are prefabricated in a factory and must be transported to the construction site, which limits their size. Pre-tensioned elements may be balcony elements, lintels, floor slabs, beams or foundation piles. An innovative bridge construction method using pre-stressing is the stressed ribbon bridge design. 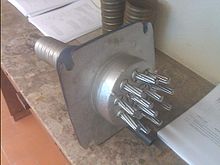 Bonded post-tensioned concrete is the descriptive term for a method of applying compression after pouring concrete and the curing process (in situ). The concrete is cast around a plastic, steel or aluminium curved duct, to follow the area where otherwise tension would occur in the concrete element. A set of tendons are fished through the duct and the concrete is poured. Once the concrete has hardened, the tendons are tensioned by hydraulic jacks that react (push) against the concrete member itself. When the tendons have stretched sufficiently, according to the design specifications (see Hooke's law), they are wedged in position and maintain tension after the jacks are removed, transferring pressure to the concrete. The duct is then grouted to protect the tendons from corrosion. This method is commonly used to create monolithic slabs for house construction in locations where expansive soils (such as adobe clay) create problems for the typical perimeter foundation. All stresses from seasonal expansion and contraction of the underlying soil are taken into the entire tensioned slab, which supports the building without significant flexure. Post-tensioning is also used in the construction of various bridges, both after concrete is cured after support by falsework and by the assembly of prefabricated sections, as in the segmental bridge.The advantages of this system over unbonded post-tensioning are:

Prestressed concrete is the main material for floors in high-rise buildings and the entire containment vessels of nuclear reactors.

Unbonded post-tensioning tendons are commonly used in parking garages as barrier cable.[1] Also, due to its ability to be stressed and then de-stressed, it can be used to temporarily repair a damaged building by holding up a damaged wall or floor until permanent repairs can be made.

The advantages of prestressed concrete include crack control and lower construction costs; thinner slabs - especially important in high rise buildings in which floor thickness savings can translate into additional floors for the same (or lower) cost and fewer joints, since the distance that can be spanned by post-tensioned slabs exceeds that of reinforced constructions with the same thickness. Increasing span lengths increases the usable unencumbered floorspace in buildings; diminishing the number of joints leads to lower maintenance costs over the design life of a building, since joints are the major focus of weakness in concrete buildings.

The first prestressed concrete bridge in North America was the Walnut Lane Memorial Bridge in Philadelphia, Pennsylvania. It was completed and opened to traffic in 1951.[2] Prestressing can also be accomplished on circular concrete pipes used for water transmission. High tensile strength steel wire is helically-wrapped around the outside of the pipe under controlled tension and spacing which induces a circumferential compressive stress in the core concrete. This enables the pipe to handle high internal pressures and the effects of external earth and traffic loads.

Europe also has its own associations and institutes. It is important to note that these organizations are not the authorities of building codes or standards, but rather exist to promote the understanding and development of pre-stressed design, codes and best practices. In the UK, the Post-Tensioning Association fulfills this role.[3]