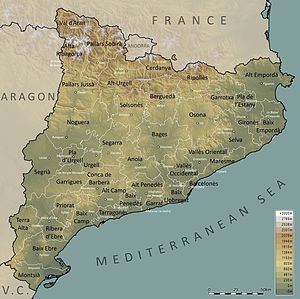 Present-day division of Catalonia in comarques

This is a list of the comarques (singular "comarca") of Catalonia (Spain). A comarca is roughly equivalent to a US "county" or a UK "district". However, in the context of Catalonia, the term "county" can be a bit misleading, because in medieval Catalonia, the most important rulers were counts, notably the Counts of Barcelona and of Urgell. Comarques have no particular relation to the "counties" that were ruled by counts.

Although today the comarques are officially recognized, for centuries they had existed unofficially, with citizens identifying with a particular comarca in the same way that people in other parts of the world might identify with a particular region.

In some cases, comarques consist of rural areas and many small villages centering around an important town, where the people of the region traditionally go to shop or to sell their goods. This is the case of comarques such as the Pla d'Estany, centered around the town of Banyoles, or the Ripollès, centered around the town of Ripoll. In other cases, comarques are larger areas with many important population centers that have traditionally been considered part of the same region, as in the case of the Empordà or Vallès.

The current official division of Catalonia into comarques originates in an order of the semi-autonomous Catalan government under the Spanish Republic in 1936. It was superseded after the 1939 victory of Francisco Franco's forces in the Spanish Civil War, but restored in 1987 by the re-established Generalitat of Catalonia. Since the definition of comarques is traditionally a non-official and sometimes ambiguous, many new proposals have been made since the comarques were first officially designated as different towns attempt to adjust the official comarques with what they consider to be their traditional comarca. As a result, some revisions to the official division were made in 1988, adding Pla de l'Estany, Pla d'Urgell and Alta Ribagorça) and in 1990, when some borders were adjusted. As of 2004[update] there was discussion of possibly further subdividing some of the comarques. [1]

The articles in naming

In the Autonomous Community of Catalonia, the comarca exists as a local government area, and has a representative consell comarcal (comarcal council).