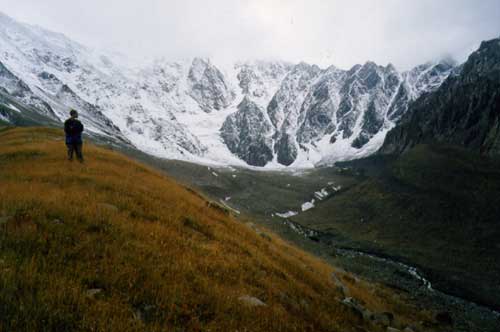 Kolka Glacier is a in , , near , known for its surging properties. The most recent and the most powerful surge took place on , , resulting in deaths of at least 125 people [cite web
title = Collapse of the Kolka glacier
publisher =
url = http://earthobservatory.nasa.gov/Study/Kolka/
accessdate = 2008-03-19]

There are only a small number of glaciers in the Genaldon River's basin, the largest being Maili at approximately 6.8 km² in area. The Kolka Glacier, located next to Maili, is a cirque / , with some hanging parts. Kolka is fed by and collapses of and ice all year-round. Its lowest and highest points are located at 3000 m and 3450 m respectively. More than two thirds of the zone's surface is covered by a morainal layer up to 1 m thick. This and other features, such as relatively gentle slopes, a deep and the presence of a lateral moraine restricting the ice flow and forcing it to make a sharp turn, makes the glacier very prone to accumulation of subglacial meltwater.

The first well-documented surge occurred on , , in the midst of an unusually hot summer, when the mean temperature was 2.7 °С higher than normal. A series of heavy rains occurred in June and early July, filling the river basins with rain and melt water and by the middle of June, a tongue of the Kolka glacier was on the move. Loud crackling was heard in the nearby settlements and, at times, the Genaldon river was turned into a stream of black mud. By the end of June, the heavily cracked glacier tongue was seen in a narrow gorge next to the Maili glacier. The tongue then partially collapsed, temporarily damming the river. A pulp of ice, water and morainal material then formed a which streamed down the river's course, stopping near the Tmenikau aul high on the valley slope. The glacier, which was still on the move, then blocked the gorge causing it to fill up with meltwater.

A second mudflow surge occurred on July 6 when a 9 km stretch of the valley floor was buried underneath a mass of ice and rocks. Its thickness at times approached 50 m, the scouring of the valley slopes reaching a height of 100 m. The estimated volume of ice that was ejected into the valley, obstructing the gorge, was in excess of 100 million m³. The mudflow speed averaged 60-70 km/h, peaking at 100 km/h. At least 32 people were killed. [cite web
title = ru icon Ученые давно предупреждали об опасности ледника Колка
publisher =
url = http://www.izvestia.ru/news/news25588
date = 2002-09-25
accessdate = 2008-03-15]

Another notable surge started on , . Because its onset occurred during a colder season with minimal presence of meltwater in the glacier's basin, the event was not catastrophic. By October 4, Kolka's tongue again reached the Maili glacier, having moved 1.3 km. After a month of relative calm, the glacier was on the move again by the beginning of November. A mass of fractured ice, 100-130 m thick, blocked the Upper Karmadon Springs and moved into the upper parts of the Glenadon valley, travelling at 20-50 m per day. By January 1970 it had stopped but, by then, the glacier had extended its length by 4.1 km and descended 800 m.

The most catastrophic surge to date occurred on , when a mass of ice, water and rocks streamed down a 4 km stretch of the valley with an icy mudflow travelling a further 12 km. Ice within the debris began to melt almost immediately, creating new lakes and flooding some settlements which, contrary to the old traditions, had been built on the valley floor. The height of the mudflow peaked at 140 m, with the height of the debris near the wall of the Skalisty Ridge reaching 100 m. The Lower Karmadon settlement was totally ravaged and at least 125 people were killed.

The surge resulted in the complete destruction of the glacier leaving behind an empty , a phenomenon not previously observed anywhere else. The large amount of subglacial water resulted in a surge so powerful, that the glacier was practically ejected from its basin. Nonetheless, it reappeared only 2 years later and is currently growing again. [cite web
title = ru icon Ледник Колка снова «растет»
publisher = NTV
url = http://news.ntv.ru/53301/
date = 2004-10-12
accessdate = 2008-03-19]