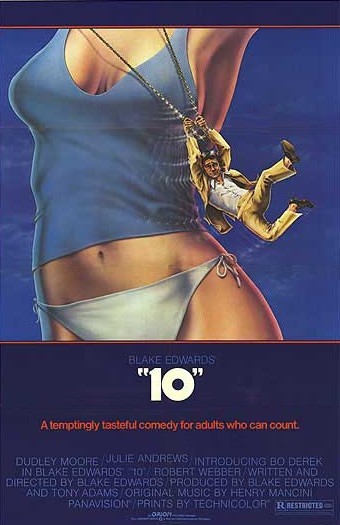 "10" is a 1979 film directed by and starring , and . Considered a trend-setting film at the time, and one of the year's biggest box office hits, the movie made s of Derek and Moore.

Taglines:
* A temptingly tasteful comedy for adults who can count.
* Just when you thought it was safe to go back in the water... (UK one-sheet)

During the surprise party for songwriter George Webber's 42nd birthday, he finds himself coping badly with incipient middle age. When he catches a glimpse of a mysterious woman () en route to her wedding, he is instantly obsessed by her beauty, and - despite the presence of his lover Samantha Taylor () - follows the woman to the church. George visits the priest, and learns that the woman is Jenny Miles, daughter of a prominent Beverly Hills dentist. Later that night, Sam is unhappy about George's unwillingness to pay attention to her, his use of the term , and the fact that he and his neighbor watch each perform carnal acts. George doesn't wish to lose an argument to her, resulting in Sam storming off.

The following day, George and Sam suffer a series of mishaps that prevent them from reconciling, including George spying on his neighbor until hitting himself with his telescope, causing him to miss Sam's phone call. In addition, George schedules a dental appointment with Jenny's father, and while in the dentist's chair, subtly leads the dentist into disclosing that his daughter and her husband went to Mexico for their honeymoon. The examination also reveals a mouthful of , requiring the dentist to spend the entire afternoon inserting in George's teeth. Afterwards, he has difficulty speaking, and when Sam talks to him on the phone she mistakes him for a madman and calls the police. Once the police leave, he visits his neighbor's house to take part in an orgy and is inadvertently seen by Sam, who happened to be watching him through his telescope. This precipitates a rift between the two of them, which results in George following the newly-weds to their exclusive hotel in , Mexico, where the sight of Jenny - suntanned and dressed in a one-piece swimsuit - furthers George's obsession.

George has a sexual encounter with a woman, who is lacking self-confidence on account of a previous relationship, named Mary Lewis. For whatever reason, George's performance in bed is less than optimal, causing Mary Lewis to leave the room, saying she doesn't bring out the best in men.

One hot day, George notices that David, Jenny's husband, has fallen asleep on his surfboard. Pretending to inquire about renting a surfboard, George learns that beyond a certain point are powerful currents that can sweep a swimmer or surfer dangerously far from land. George rents a , saves David, and becomes a hero. Sam tries to make contact, but not knowing who the caller is, George has no interest in talking at that particular time. David is badly sunburned and stays in the hospital, allowing Jenny and George to spend time alone together.

George unexpectedly finds all of his fantasies fulfilled, but is taken aback to discover that Jenny doesn't regard her adultery as being shocking and it even appears as if she and David enjoy an , as he evidently enjoyed the thrill of doing something forbidden. As a result, he loses interest in Jenny and heads back to Beverly Hills to reconcile with Sam.

The film made a star of , but he only got the role after the film's original star quit the day before shooting was to commence, apparently unhappy at the amount of artistic input Edwards was giving his wife .