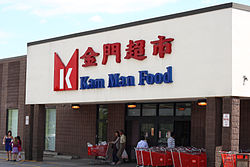 An Asian supermarket, sometimes called an "Oriental supermarket", is a grocery store in non-Asian countries that stocks items imported from the many countries in East and Southeast Asia. They carry items and ingredients generally well-suited for Asian cuisines and not found in most Western supermarkets.

The Asian market is an ethnic food store in a foreign culture. These markets go farther than a typical market in that they sell quintessential general merchandise, goods, and services related to Asian countries of origin and immigrant communities. They are prevalent in Asian enclaves in the United States and Canada, particularly the North American West Coast. Urban centers such as Los Angeles, San Francisco, and Seattle have Chinatowns or Japantowns and other ethnic neighborhoods with specialty small business, but surrounding areas or smaller cities will have Asian supermarkets providing the same but reduced amenities for the same purposes.

Sometimes, there is an Asian-themed strip mall surrounding the market. The markets can be ethnocentric and be a mainly Chinese, Japanese or Filipino market; however in many areas there is no majority Asian population or there is a mix of cultures. It is this diversity that led to the establishment of Pan Asian goods in a one-stop shop with aisles selling foods in common and others dedicated to other groups such as Pakistani, Indian, Malaysian, Vietnamese, Thai, Samoan, Taiwanese, Korean and others. One major United States chain is 99 Ranch Market. 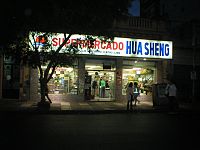 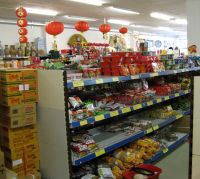 Most of these supermarkets are started and operated by Asian immigrant entrepreneurs and their families. Others are started by investors of existing corporate conglomerates already headquartered in Asia, namely Hong Kong, Japan, South Korea, Taiwan or the Philippines.

Asian supermarkets can range from small mom-and-pop grocery stores to large big-box stores and may cater specifically to one ethnic Asian immigrant group or to a wide pan-Asian crowd. They serve the generally unserved or underserved immigrant and descendant population. They are usually the main attraction for food shopping within overseas Asian shopping malls and Chinatowns. Asian supermarkets may re-occupy older buildings formerly anchored by mainstream regional or national supermarket chains.

In recent years, some mainstream markets have attempted to compete with Asian supermarkets for the minority customer base by stocking certain Asian goods as well as directing marketing towards various Asian ethnic immigrant populations. Conversely, some Asian supermarkets attempt to appeal to the general population. Asian markets are reputed to have lower prices than the mainstream chains.

Asian supermarkets represent a new trend in which Asian immigrants no longer settle in old enclaves such as Chinatown, San Francisco (still the largest in the US) but in suburbs where shopping centers provide services as well as cultural amenities such as hosting ethnic festivals, shows and dance.

One of the major redevelopments highlighted in the press has been Buford Highway in the Atlanta suburb of Doraville, Georgia, where Asian supermarkets have done brisk business in a once-blighted neighborhood. Such supermarkets have also revitalized the once-rundown sections of Bellaire Blvd in Houston, Texas, and turned it into a thriving new Asian shopping district.[1] There are also many competing Chinese supermarkets in the Southern California Chinatowns and Vietnamese markets anchoring communities such as Little Saigon.