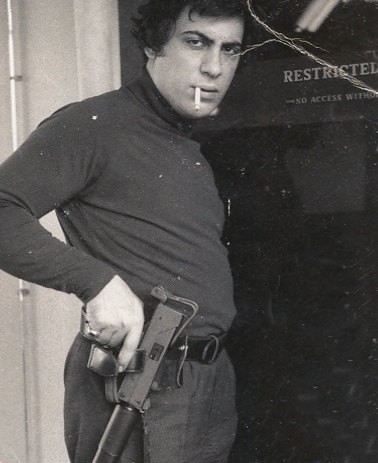 Paris Theodore (, —, ) was an American inventor of innovative gun holsters and state-of-the-art s and techniques used by government agents and police departments in the U.S. and abroad, as well as by the fictional . Theodore died November 16, 2006 at St. Luke’s hospital in . The cause of death was complications resulting from a longstanding and debilitating bout with .

Theodore was born in on January 9, 1943, his father, John, was a sculptor and art professor at The . His mother, Nenette Charisse was a renowned ballet instructor and member of a dancing company. Charisse’s second husband was Robert Tucker, a Tony-nominated choreographer, and the couple raised Theodore from early childhood. Following his graduation from The on Manhattan’s Upper East Side, and while still a teenager, in the early 1960’s, Theodore supplemented his work as an abstract painter by serving as an independent contractor for the . For several years, he performed a number of dangerous covert missions for the Agency, many of which required him to carry and use handguns. His experience sparked an interest in creating special holsters for the concealment of weapons. “I was working for Uncle Sam as a freedom fighter until Communism imploded on itself,” Theodore said.

In 1966, at the age of 23, Theodore founded Seventrees Ltd., a company that designed and produced gun holsters for professionals who had the need to conceal weapons yet access them quickly. Demand among undercover investigators and intelligence agents grew quickly for his innovative designs and Seventrees was soon awarded several contracts from a variety of U.S. agencies. The growing popularity of the holsters inspired many imitations by other manufacturers. Even the company’s slogan “Unseen in the Best Places” was copied by at least one competitor.

Invention of the ASP

One of ASP’s first products was a Theodore-designed handgun bearing the name of the company. The “,” based on the Model 39 semi-automatic pistol, featured many innovations: “clear grips”—which enabled the user to see the number of unfired rounds remaining; the “guttersnipe”—a ground-breaking gun sight designed for close range combat; and a “forefinger grip”—today a standard feature on the trigger guard of many modern handguns. Theodore’s ASP was the first successful service caliber handgun in true pocket pistol size. Its arrival inspired a cottage industry of gunsmiths producing unauthorized versions of the weapon. This led a the creation of a factory-produced version of the ASP that soon became one of the most popular pistols for a major gun manufacturer. Shortly thereafter, the entire gun industry began producing compact and sub-compact service caliber handguns.

In 1970, the ASP was featured in "The Handgun", by Glaswegian gun expert Geoffrey Boothroyd. Boothroyd, the inspiration for “Q,” the technologically inventive character who outfitted with his lifesaving gadgets, would, in turn, later inspire ’s successor, John Gardner, to replace Bond’s renowned as 007’s weapon of choice. Beginning with 1984’s "Role of Honor", the ASP would go on to be featured in 11 James Bond novels. James Bond expert James McMahon would later write: “If Bond were a gun, he'd be the ASP. Dark, deadly, perfectly suited to his mission.”

In 1980, Theodore formed Techpak, a company created to market a combat handgun shooting technique he had developed called “Quell.” The Quell system included a realistic depiction of close quarter combat, a shooting stance, as well as a target designed to enhance the shooter’s understanding of the Quell Zone, the area, that when struck, caused the instant cessation of movement by a hostile opponent. Quell drew upon Theodore’s real-life experience in close quarter combat and the concept of a "Quell stop" became standard training for many police departments and special agencies throughout the world. Through Quell, he sought to educate weapons professionals about the stark reality of close combat with handguns. “From the movies we have learned to expect that when someone is shot in the arm, he reacts immediately by grabbing it with his free hand, wincing, and maybe uttering an ‘Unh!’ When he is shot in the chest, a spot of blood appears and he is thrown backwards, usually with arms flailing, to land motionless and silent.” Theodore wrote in 1985, “The truth is that no bullet from a sidearm, no matter what the caliber, will bowl a man over.” He described this “knock-down power” as “the figment of the collective imagination of Hollywood screenwriters.”

As a child, Theodore appeared as “Nibs” in NBC’s 1955 broadcast of staring . In 1962, Theodore married Lee Becker, the Tony-nominated dancer and choreographer and founder of The American DanceMachine, who died in 1987. He is survived by his sons, Ali and Said Theodore and Paris Kain. Kain, a filmmaker, is currently producing a documentary based on the life of his late father.

*US patent|5251799 "Holster" (Weapon holsters having one-piece construction), filed December 3, 1992, issued October 12, 1993
*US patent|5251798 "Holster" (Weapon holsters having one-piece construction), filed December 3, 1992, issued October 12, 1993
*US patent|5209383 "Holster" (Weapon holsters having one-piece construction), filed February 20, 1992, issued May 11, 1993
*US patent|4508508 "Firearm training system" (A novel firearms target is described which is useful in training police officers and others in the use of small arms.), filed September 26, 1983, issued April 2, 1985
*US patent|D264,748 "Holster" (The ornamental design for a holster.), filed August 1, 1980, issued June 1, 1982
*US patent|3938717 "Magazine holder" (A cartridge magazine holder including a magnet to hold a pair of cartridge magazines with large portions of the magazines exposed so that they may be easily grasped and withdrawn by the user.), filed February 1, 1974, issued February 17, 1976
*US patent|3870208 "Handcuff case" (A handcuff case that is worn on the belt and holds the handcuffs with the frame and jaw exposed so that the handcuffs may be immediately grasped and withdrawn for use by the wearer.), filed December 5, 1973, issued March 11, 1975
*US patent|3777954 "Cartridge pouch" (A cartridge pouch made of a single piece of leather and a single snap fastener for holding two groups of about three cartridges each.), filed January 3, 1972, issued December 11, 1973
*US patent|3777952 "Secure holster for revolvers" (A holster to be carried high on the hip and having a trigger guard pocket, a muzzle pocket, and a breakfront flap which cooperate to prevent removal of the revolver from the holster.), filed January 3, 1972, issued December 11, 1973
*US patent|3777380 "Gunsight" (A gunsight including a rear notch and a relatively smaller front notch, preferably in the form of a block of material having an open channel, formed therein and converging from a rear notch to a front notch, the sides of said channel preferably being of a light color such as yellow.), filed December 23, 1971, issued December 11, 1973
*US patent|3758978 "Grips for handguns" (Improved grips for handguns including transparent grip plates to permit viewing of the remaining ammunition in a magazine-fed automatic pistol, a magazine grip extension angled backward from the main grip line and of reduced thickness to provide an efficient grip for the little finger, and a forefinger pocket formed on the front of the trigger guard to provide a secure grip for the forefinger of the free (left) hand thus improving control of recoil when a two-handed hold is used by the shooter for fast firing.), filed December 23, 1971, issued September 18, 1973
*US patent|3583612 "Inside the pants holster" (A holster which is adapted to be worn inside the pants, just behind the hip of the wearer and which has a relatively wide flange extending in the plane of the handgun to be carried and molded to the hip of the wearer to stabilize the holster.), filed January 3, 1969, issued June 8, 1971
*US patent|3583611 "Holster" (An extremely simple but effective holster which is in the form of a strap which wraps over the top of the frame of a handgun or other firearm and is secured through the trigger guard by a releasable fastening device to hold the weapon.), filed November 26, 1968, issued June 8, 1971