The 2006 Nukuʻalofa riots started on 16 November, in the Tongan capital of Nukuʻalofa. The Legislative Assembly of Tonga was due to adjourn for the year and despite promises of action, had done little to advance democracy in the government. A mixed crowd of democracy advocates took to the streets in protest. Some people in the crowd starting tipping over cars, then progressed to looting and burning buildings.

Riots broke out around 3:30 pm TOT as rioters threw stones, broke windows, and looted. By about 6:00 pm, rioters started setting buildings on fire. The first targets of the rioters were government buildings. Then they attacked enterprises, including some that were leased to ANZ Bank and those owned by the Prime Minister Feleti Sevele.

Several of the larger Chinese shops were targeted for looting and burning. Other shops, including one owned by ethnic Indians, were burned as well, but it is not clear if they were intentionally set on fire or caught fire from surrounding buildings. 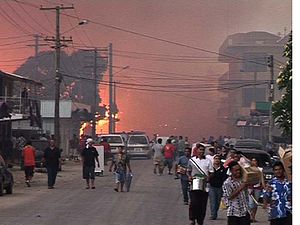 At about 6:00 PM TOT rioters torched the Royal Pacific hotel (owned by the Shoreline Group of Companies). The hotel was located on one of the main roads into the city. There are many commercial buildings on the thoroughfare, and the fire spread to some of those buildings as well.

According to an article in Tonga Now,[1] normally law-abiding Tongans of both sexes and all ages were participating avidly in the looting. However, some photos[1] would seem to indicate that the car-tipping and arson were the work of young men. This conception would be reinforced after a destroyed Chinese shop was vandalized with graffiti.

At nightfall, the police and the Tonga Defence Services regained control of the central business district and were turning away anyone who tried to enter.

Estimates of the damage varied. Some estimates said that 60 to 80% of the central business district was destroyed.[2] 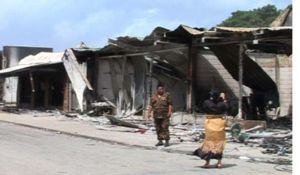 The day after, a journalist under the watchful eye of the army

It was announced that eight bodies had been found in charred ruins.[3] Since most of the employees of the affected businesses managed to reach safety, news reports speculated that the dead were likely looters. It is not clear if the deceased have been identified or if identified, when their names will be released.

The Tongan government declared a state of emergency. Only firefighters, police, utility workers, etc. were allowed inside a perimeter defined by Vuna road, ʻAlipate road, Mateialona road, and Tupoulahi road. Residents of that area could enter only after being searched. For the next month, gatherings of more than five persons were illegal in that area. Emergency laws gave security forces the right to stop and search people without a warrant.[4]

The Tongan government promised reform. Popular elections are to be held in 2008, in which a majority of the Legislative Assembly will be elected by a popular vote.[5]

The Chinese embassy chartered an airplane to evacuate Chinese nationals.[6]

110 soldiers and 44 police officers from Australia and New Zealand arrived to help the local police to establish order. The New Zealand army was to be in charge of airport security and the police were to protect the High Commission. The Australian contingent were to assist and relieving exhausted Tongan police.[7]

Restrictions on entry into town were relaxed. Citizens were again allowed into town, but on foot only, in order to attend church services. Airlines are said to be operating with special flights on Sunday (an exception to the strict laws prohibiting commercial activity on the Christian Sabbath). Electricity has been restored to all parts of Nukuʻalofa.[citation needed]

A leader of the Tongan pro-democracy movement, MP 'Akilisi Pohiva, has criticised the intervention of Australian and New Zealand peacekeepers following the riots.[8]

Some businesses had temporarily relocated to the suburbs. Some looted items were returned. Police were guarding the telecommunications center and investigating mobile call logs. According to the Matangi Tonga newspaper, twenty-six arrests had been made and the number of deaths had been revised down to six.[9]

Nukuʻalofa was by now largely peaceful. The town center was still cordoned off and heavily patrolled, but local shop owners and the like could easily get permission to enter the restricted area. Some Chinese shops which escaped damage were now open again. Major shops and banks, however, were still operating from temporary locations in the suburbs.

Peace was believed to be restored and foreign forces began leaving. The forbidden area in town was reduced. Police had made 571 arrests.[10]

Maintaining the state of emergency

In late January 2008, the Tongan authorities renewed a Proclamation of Public Order for the sixteenth month running, a lingering aftermath of the riots. The statement reads: "It is hereby proclaimed that there continues to exist a state of danger" in central Nukuʻalofa. According to the Proclamation, the area will remain "controlled and maintained by the Tonga Police Force and Tonga Defence Services for the sole purpose of maintaining public order for all people of the country".[11] Tongan information minister Afualo Matoto announced that the state of emergency would probably be maintained for another three months (i.e., until the end of April). This was criticised by Tongan pro-democracy advocate Akilisi Pohiva: "I don’t see any reason for government to continue to hold on to the emergency power."[12]

The state of emergency was lifted in August 2008. Member of Parliament 'Akilisi Pohiva noted that the government had probably chosen to wait until after the coronation of King George Tupou V to put an end to it.[13] It was, however, re-imposed in September, despite the objections of pro-democracy members of Parliament.[14][15]

A joint investigation into the riots by the Tonga police, Australian Federal Police and New Zealand Police, codenamed Operation Kaliloa, has begun.

Tongan MP and former Police Minister Clive Edwards claims that Tongan soldiers have beaten hundreds of people and then refused them treatment for their injuries. Edwards claims he was attacked by soldiers himself.[16] An official of the Tongan Defence Force said there was no evidence to back up Edwards' claims. He would not give his name.[17] On 2 February 2007, Edwards was arrested and charged with two counts of sedition arising from the riots.[18]

The state of emergency declared on 17 November 2006 has been extended several times. Various expiration dates have been planned, including the Tongan government stating it would be maintained until April 2008.[19][20] It is still in place as of June 2010.[21]

The first business to rebuild and reopen was the Fung Shin supermarket, which opened in new premises on 19 December 2007.[22]