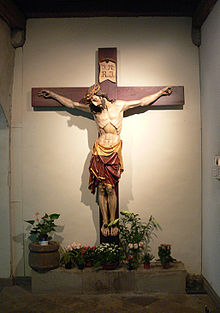 The Crucifix, a cross with the corpus (Body of Christ), is an ancient symbol used within the Catholic, Eastern Orthodox, Anglican, and Lutheran churches, in contrast with some Protestant groups, which use only a simple cross.

A crucifix (from Latin cruci fixus meaning "(one) fixed to a cross") is an independent image of Jesus on the cross with a representation of Jesus' body, referred to in English as the corpus (Latin for "body"),[1][2] as distinct from a cross with no body.

The crucifix is a principal symbol for many groups of Christians, and one of the most common forms of the Crucifixion in the arts. It is especially important in the Catholic Church, but is also used in Orthodox and Eastern Catholic, as well as Anglican, and Lutheran churches, (though less often in other Protestant churches), and it emphasizes Jesus' sacrifice — his death by crucifixion, which Christians believe brought about the redemption of mankind. Western crucifixes usually have a three-dimensional corpus, but in Eastern Orthodoxy Jesus's body is normally painted on the cross, or in low relief. Strictly speaking, to be a crucifix the cross must be three-dimensional, but this distinction is not always observed. A painting of the Crucifixion of Jesus including a landscape background and other figures is not a crucifix either.

Large crucifixes high across the central axis of a church are known by the Old English term rood. By the late Middle Ages these were a near-universal feature of Western churches, but are now very rare. Modern Roman Catholic churches often have a crucifix above the altar on the wall; for the celebration of Mass, the Roman Rite of the Catholic Church requires that, "on or close to the altar there is to be a cross with a figure of Christ crucified".[3] 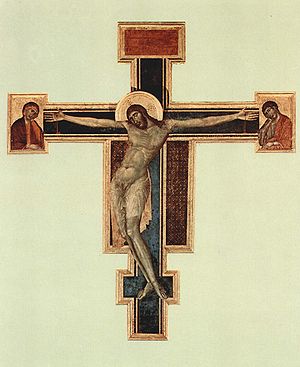 The standard, four-pointed Latin crucifix consists of an upright post or stipes and a single crosspiece to which the sufferer's arms were nailed; but there may be a short projecting nameplate, showing the letters INRI (Greek: INBI). The Russian Orthodox crucifix usually has an additional third crossbar, to which the feet are nailed, and which is angled upward toward the penitent thief Saint Dismas (to the viewer's left) and downward toward the impenitent thief Gestas (to the viewer's right). The corpus of Eastern crucifixes is normally a two-dimensional or low relief icon that shows Jesus as already dead, his face peaceful and somber. They are rarely three-dimensional figures as in the Western tradition, although these may be found where Western influences are strong, but are more typically icons painted on a piece of wood shaped to include the double-barred cross and perhaps the edge of Christ's hips and halo, and no background. More sculptural small crucifixes in metal relief are also used in Orthodoxy (see gallery examples), including as pectoral crosses and blessing crosses.

Western crucifixes may show Christ dead or alive, the presence of the spear wound in his ribs traditionally indicating that he is dead. In either case his face very often shows his suffering. In Orthodoxy he has normally been shown as dead since around the end of the period of Byzantine Iconoclasm.[4] Eastern crucifixes have Jesus' two feet nailed side by side, rather than crossed one above the other, as Western crucifixes have showed them for many centuries. The crown of thorns is also generally absent in Eastern crucifixes, since the emphasis is not on Christ's suffering, but on his triumph over sin and death. The "S"-shaped position of Jesus' body on the cross is a Byzantine innovation of the late 10th century,[5] though also found in the German Gero Cross of the same date. Probably more from Byzantine influence, it spread elsewhere in the West, especially to Italy, by the Romanesque period, though it was more usual in painting than sculpted crucifixes. It's in Italy that the emphasis was put on Jesus' suffering and realistic dettails, during a process of general humanization of Christ favored by the Franciscan order. During the 13th century the suffering Italian model (Christus patiens) triumphed over the traditional Byzantine one (Christus gloriosus) anywhere in Europe also due to the works of artists such as Giunta Pisano and Cimabue. Since the Renaissance the "S"-shape is generally much less pronounced. Eastern Christian blessing crosses will often have the Crucifixion depicted on one side, and the Resurrection on the other, illustrating the understanding of Orthodox theology that the Crucifixion and Resurrection are two intimately related aspects of the same act of salvation.

Another, symbolic, depiction shows a triumphant Christ (clothed in robes, rather than stripped as for His execution) with arms raised, appearing to rise up from the cross, sometimes accompanied by "rays of light", or an aureole encircling His Body. He may be robed as a prophet, crowned as a king, and vested in a stole as Great High Priest.

On some crucifixes a skull and crossbones are shown below the corpus, referring to Golgotha (Calvary), the site at which Jesus was crucified, which the Gospels say means in Hebrew "the place of the skull."[6] Medieval tradition held that it was the burial-place of Adam and Eve, and that the cross of Christ was raised directly over Adam's skull, so many crucifixes manufactured in Catholic countries still show the skull and crossbones below the corpus.

Very large crucifixes have been built, the largest being the Cross in the Woods in Michigan, with a 31 feet (9.4 m) high statue.[7] 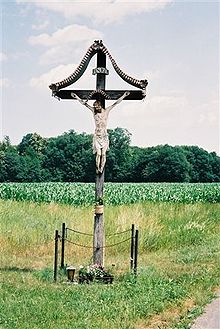 An enshrined crucifix amidst the cornfields near Mureck in rural Styria, Austria.

Roman Catholic (Eastern and Western Rite Catholics), Eastern Orthodox, Coptic and other Oriental Orthodox, Anglican and Lutheran Christians generally use the crucifix in public religious services. They believe the crucifix is in keeping with Scripture, which states that “we preach Christ crucified: a stumbling block to Jews and foolishness to Gentiles” (1 Cor 1:23). In the West altar crosses and processional crosses began to be crucifixes in the 11th century, which became general around the 14th century, as they became cheaper than before. Since the Roman Missal of Pius V in 1570 use of a crucifix as an altar cross has been mandatory (with some exceptions) for the Catholic mass. Eastern Christian liturgical processions called crucessions also include a cross or crucifix at their head.

Prayer in front of a crucifix is often part of devotion for Christians, especially those worshipping in a church, and private devotion in a chapel. The person may sit, stand, or kneel in front of the crucifix, sometimes looking at it in contemplation, or merely in front of it with head bowed or eyes closed. In the Anglican and Lutheran Holy Eucharist, and more formal Roman Catholic Masses, a procession begins the service in which a cross or crucifix is carried forward into the church followed by lector and servers, the priest, deacon, along with some of the other items used in the service such as the Gospels and the altar candles. Since the Counter-Reformation,[8] an altar cross in crucifix form has been compulsory in the Catholic Church, unless there is, for example, an altarpiece of the crucifixion.

In the Eastern Orthodox Church, the crucifix is often placed above the iconostasis in the church. In the Russian Orthodox Church a large crucifix ("Golgotha") is placed behind the Holy Table (Altar). A large crucifix is taken in procession to the center of the temple (church) during the Matins of Good Friday, where it is venerated by the faithful. Sometimes the soma (corpus) is removable and will be taken down off the crucifix at Vespers that evening during the Gospel lesson describing the Descent from the Cross. The empty cross may then remain in the center of the church until the Paschal vigil (local practices vary). The blessing cross which the priest uses to bless the faithful at the dismissal will often have the crucifix on one side and an icon of the Resurrection of Jesus on the other, the side with the Resurrection being used on Sundays and during Paschaltide, and the crucifix on other days.

During the Middle Ages small crucifixes, typically hung on a wall, became normal in the personal cells or living quarters first of monks, and then all clergy, followed by the bedrooms of the laity, spreading down from the top of society as these became cheap enough for the average person to afford. By the 19th century displaying a crucifix somewhere in the general reception areas of a house became typical of Catholic homes, and this remains largely the case.

The crucifix is also one of the Church's sacramentals used by Christians. It is considered by some to be one of the most effective means of averting or opposing demons, as stated by many exorcists, including the famous exorcist of the Vatican, Father Gabriele Amorth. In folkloric legends it is considered to ward off vampires, incubi, succubi, and other evils.

Modern iconoclasts have used an inverted (upside-down) crucifix when showing disdain for Jesus Christ or the Catholic Church which believes in his divinity.[9] According to Christian tradition, Saint Peter was martyred by being crucified upside-down.[10] 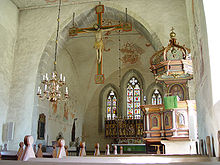 Hanging rood on Gotland in Sweden, where numbers of medieval roods survive in place.

Early Protestants generally rejected the use of the crucifix, and indeed the unadorned cross, along with other traditional religious imagery, as idolatrous. Martin Luther did not object to them, and this was among his differences with Andreas Karlstadt as early as 1525. Calvin was violently opposed to both cross and crucifix. In England the Royal Chapels of Elizabeth I were most unusual among English churches in retaining crucifixes, following the Queen's personal conservative preferences. Under James I these disappeared, and their brief re-appearance in the early 1620s when James' heir was seeking a Spanish marriage was the subject of rumour and close observation by both Catholics and Protestants; when the match fell through they disappeared.[11] Opposition to plain crosses has generally softened in Protestantism, but many Protestant groups still oppose the crucifix.

In 2005, a mother accused her daughter's school in Derby, England of discriminating against Christians after the teenager was suspended for refusing to take off a crucifix necklace.[12]

British Airways has faced legal action and calls for a boycott by Christians after it ruled an employee could not display a crucifix on her necklace (a rule it has now relaxed).[13] A British prison ordered a multi-faith chapel to remove all crucifixes, presumably to avoid offending Muslims.[14]

In 2008 in Spain, a local judge ordered crucifixes removed from public schools to settle a decades-old dispute over whether crucifixes should be displayed in public buildings in a non-confessional state.[15] A 2008 Quebec government report recommended that the crucifix of the National Assembly be removed to achieve greater pluralism, but the local Liberal party refused.[16]

On 18 March 2011, the European Court of Human Rights ruled, in the Lautsi v. Italy case, that the requirement in Italian law that crucifixes be displayed in classrooms of state schools does not violate the European Convention on Human Rights.[17][18][19]

Crucifixes are common in most other Italian official buildings, including courts of law.

On 24 March 2011, the Constitutional Court of Peru ruled that the presence of crucifixes in courts of law does not violate the secular nature of the state.[20]