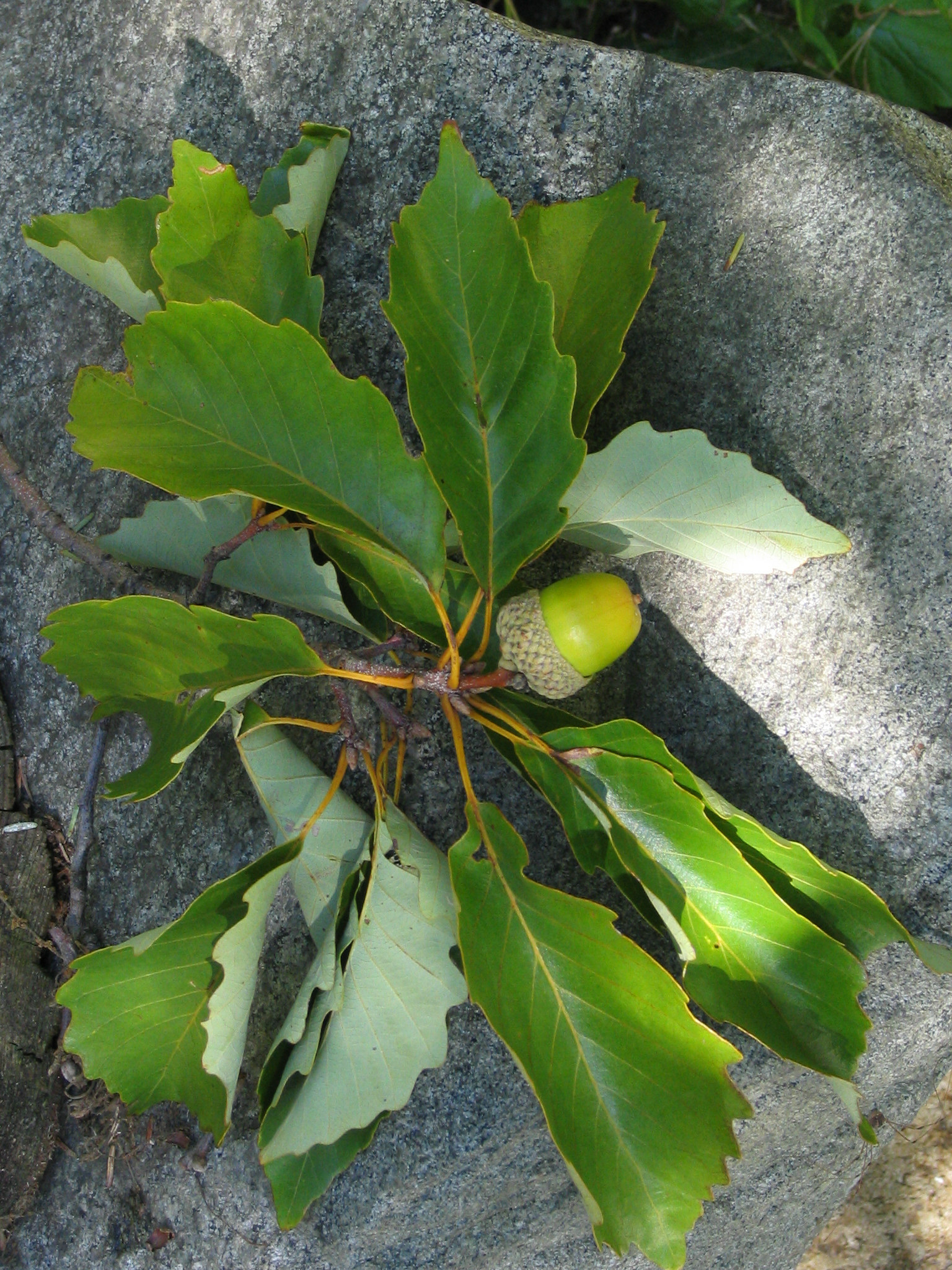 The Chestnut oak ("Quercus prinus"; synonyms "Quercus montana Willd.","Quercus michauxii Nutt.") is a species of in the white oak group, "Quercus" sect. "Quercus". It is native to the eastern , where it is one of the most important ridgetop trees from southern southwest to central , with an outlying northwestern population in southern . It is also sometimes called "rock oak" because of montane and other rocky habitats. As a consequence of its dry habitat and ridgetop exposure, it is not usually a large tree, typically 18-22m (60-70 ft) tall; occasional specimens growing in better conditions can however become large, with trees up to 40-43 m (130-140 ft) tall known. They tend to have a similar spread of 18-22m (60-70 ft). A 10-year-old sapling will stand about 5 m (16 ft) tall. The trees are usually not the best timber trees because they are usually branched low and not very straight, but when they grow in better conditions, they are valuable for . The timber is marketed as 'mixed white oak'.

The Chestnut oak is readily identified by its massively-ridged dark gray-brown , the thickest of any eastern n oak. The leaves are 12-20 cm long and 6-10 cm broad, shallowly lobed with 10-15 rounded lobes on each margin; they are virtually identical to the leaves of and , but the trees can readily be distinguished by the bark, that of the Chinkapin oak being a light ash-gray and somewhat peeling like that of the and that of Swamp chestnut oak being paler ash-gray and scaly. The chinkapin oak also has much smaller acorns than the chestnut oak. The Chestnut oak is easily distinguished from the because that tree has whitened undersides on the leaves.

Extensive confusion with the Swamp chestnut oak has occurred, and some botanists have considered them to be the same species in the past. The chief way to distinguish the two is by habitat; if it grows on a ridge, it is Chestnut oak, and if it grows in wet bottomlands, it is probably the more massive Swamp chestnut oak; however, this is not fully reliable.

The s are 1.5-3 cm long and 1-2 cm broad, among the largest of native American oaks, surpassed in size only by the and possibly Swamp chestnut oak, and are a valuable wildlife food.

The Chestnut Oak is commonly known by the name "Quercus prinus", given by , but the original specimen included a mixture of leaves from this and other species, and "Quercus prinus" is now considered by some a confused name to be rejected. The next-oldest name "Quercus montana", given by Willdenow, is the name recommended for the species by the Flora of North America. Currently however, the ITIS (Integrated Taxonomic Information System) still reports that "Q. prinus" is the accepted name.