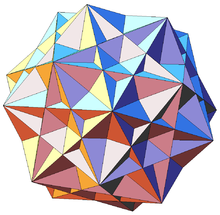 This polyhedral compound is a symmetric arrangement of five cubes. This compound was first described by Edmund Hess in 1876.

It is one of five regular compounds, and dual to the compound of five octahedra.

It is one of the stellations of the rhombic triacontahedron. It has icosahedral symmetry (Ih).

The compound of ten tetrahedra can be formed by taking each of these five cubes and replacing them with the two tetrahedra of the Stella octangula (which share the same vertex arrangement of a cube).

This compound can be formed as a stellation of the rhombic triacontahedron. The 30 rhombic faces exist in the planes of the 5 cubes.

The stellation facets for construction are: 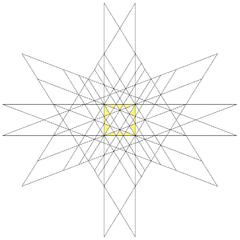 Five cubes in a dodecahedron