Before the war, the United States Marine Corps had been an "exceptionally fine and well-disciplined" organization, and "from it came the nucleus of the corresponding establishment of the Confederate service", the CSMC.[2] The CSMC was modeled after the United States Marine Corps, but there were some differences: the Confederates organized themselves into permanent companies, replaced the fife with the light infantry bugle, and wore uniforms similar to those of British Royal Marines. Like the USMC, when ashore they provided guard detachments for Confederate naval stations at:

Seagoing detachments served aboard the various warships and even on commerce destroyers.

The CS Marine Corps was formed in the early days of the Civil War from three sources:

Rank insignia of a CSMC captain

The Commandant of the CSMC, Colonel-Commandant Beall, said the CSMC "was composed of enlisted men, many of whom were old soldiers and commissioned officers, a number of whom had seen service before in the U.S. Marine Corps and elsewhere."[4] The record of US Marine officers who "resigned and tendered their swords to the Confederate Government"[2] were:

These officers assembled with the CSMC as it stood up in Richmond, Virginia, with the exception of Captain Tansill, who had resigned while still onboard the USS Congress at sea. Captain Tansill was arrested by order of Secretary Welles of the U.S. Navy when he arrived in New York on August 23, 1861 and was held without charge, hearing or trial. He was released on Jan 10, 1862 as part of a prisoner exchange, and subsequently joined the CSMC in Virginia. "The gross injustice done him was recognized in an act of the Confederate Congress of April 11, 1863, which provided that 'officers of the navy and Marine Corps who resigned from the navy and Marine Corps of the United States in consequence of secession, and who were arrested and imprisoned in consequence of such resignation, and who subsequently joined the navy and Marine Corps of the Confederate States,' should receive 'leave of absence, pay for and during the term of such imprisonment, and up to the time of their appointment in the navy and marine corps of the Confederate States.' "[6]

The breakdown of officer manpower composition was:

The breakdown of enlisted manpower composition as of Sep 24, 1862 was:

Although the CSMC had an authorized manpower of 1026 men, its enrollment never approached that number; the figures for 30 October 1864 list only 539 officers and enlisted men.[7] Though the officers were mostly former U.S. Marine officers, the head of the corps, Colonel-Commandant Lloyd J. Beall, was a former U.S. Army paymaster with no Marine experience. Major Lloyd J. Beall, USA graduated from the United States Military Academy, and had served in the First Infantry and Second Dragoons before becoming a paymaster from 1844 until the outbreak of the war. He resigned his commission on April 22, 1861 and was appointed Colonel-Commandant of the CS Marine Corps on May 23, 1861. Colonel Beall served throughout the war as the only Commandant of the Marine Corps.[8]

CS Marine Corps units were stationed at Confederate naval bases, as well as helping garrison shore fortifications such as Fort Fisher in North Carolina. Marines also served on Confederate warships, such as the CSS Alabama. In the famous battle between the ironclads USS Monitor and CSS Virginia, Company C, Confederate States Marine Corps, served aboard the CSS Virginia, helping to man several of her guns.

In the summer of 1862, the CS Marine Corps was broken into squad-sized units and dispersed throughout the south.[3] Dispersed Marine units were intended to provide training to overcome a shortage of trained naval gunners, with greater overall effect than their service as a single naval artillery battalion.[3] With detachments spread at every major Confederate naval installation, Headquarters for the Confederate States Marines was established at Fort Darling and Camp Beall, located at Drewry's Bluff on the James River in Virginia. Three companies, A, B, and C, were stationed semi-permanently at headquarters. There the Marines helped repulse the attack made on the Bluff by U.S. naval forces including the USS Monitor and the USS Galena in the summer of 1862.

Despite desertions and even near-mutinies, most Marines served well and deserved Navy Secretary Stephen R. Mallory's praise for their "promptness and efficiency." The Corps' weakness was due largely to internal squabbles over rank, shore duty, and administrative assignments. Also, with no funds for bounties, the corps could not easily enlist recruits. Until 1864 the monthly pay of enlisted men was $3 less than that of equivalent Army grades. Only late in the war were the Marines allowed to draw from Army conscripts to augment their ranks.[9]

Service during the war

Confederate Marines saw their first naval action aboard the CSS Virginia (USS Merrimack) off Hampton Roads, Virginia, March 8 to March 9, 1862, and near the end of the war were part of the naval brigade that fought at Sayler's Creek, Virginia.

From the Drewry's Bluff and other major posts (Wilmington, Charleston, Pensacola, Norfolk, Galveston, and Savannah), Marine detachments were parsed out to serve on major warships and for special operations, including the captures of the USS Underwriter and the USS Water Witch, and an attack to free Confederate prisoners of war being held at Point Lookout, Maryland.

Marine sea-based amphibious operations included the "Old" CSS Savannah shore party at Fort Beauregard, Phillips Island, SC to evacuate the garrison under attack.[10] Marines under the command of Commodore Josiah Tattnall were used to construct and man shore batteries which turned back Union gunboats and monitors both at Richmond and at Savannah.[11]

The end of the war found most surviving Confederate States Marines gathered together in Richmond in support of the last desperate defenses of the South.[3] Marines in Virginia were part of the General Richard S. Ewell's Corps which fought with distinction at the Battle of Sayler's Creek,[3] the last major battle before the surrender of Lee's Army at Appomattox. 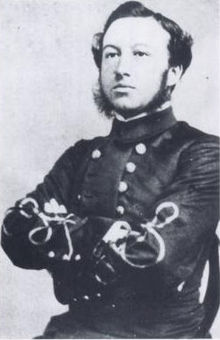 Their uniform resembled that prescribed for the Confederate Army, but since the CSMC was not as large and many of its records were destroyed in 1865, there is controversy about the exact details of the uniform. It is clear, however, that the Marines were often equipped out of the stores of whichever garrison was nearest their location. One description has the Marines dressed in frock coats of a particular (and undetermined) shade of gray and dark blue or black trousers. It appears that Confederate States Marines wore forage caps although it is unclear if there was any ornamentation on the cover. Much of the gear worn by the CSMC was imported from the United Kingdom and its empire, namely Canada, and Russia creating a fairly unique look.