Out of the Inkwell

Out of the Inkwell 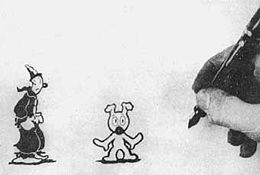 Still from an Inkwell Imps cartoon featuring Koko the Clown and Fitz the Dog.

Out of the Inkwell was a major animated series of the silent era produced by Max Fleischer from 1918 to 1929. The series was the result of three short experimental films that Max Fleischer independently produced in the period of 1914-1916 to demonstrate his invention, the Rotoscope, which was a device consisting of a film projector and easel used as an aid for achieving realistic movement for animated cartoons. The Rotoscope would project motion picture film through an opening in the easel, covered by a glass pane serving as a drawing surface. The image on the projected film was traced onto paper, advancing the film one frame at a time as each drawing would be made. Fleischer's younger brother Dave Fleischer was working as a clown at Coney Island, and served as the model for what was to become their first famous character that later evolved as "Koko the Clown."

Out of the Inkwell was begun at The Bray Studio as a monthly entry in The Bray Pictorgraph Screen Magazine produced for Paramount from 1918 to 1920, and later for Goldwyn in 1921. In that same year, The Fleischer brothers started their own studio, and in 1923, the clown who previously had no name came to be known as KO-KO when animation veteran Dick Huemer became the new Director of Animation production. Huemer, who had begun animation with the Mutt and Jeff cartoons in 1916, brought the influence of that series to "Out of the Inkwell" and created a small canine companion named Fitz. Huemer also redesigned the clown for animation and led the Fleischers away from their dependency on the Rotoscope for animating. He also defined the drawing style with his distinctive inking quality that the series was famous for.

But it was the integration and interaction of the live action sequences starring Max Fleischer as the artist and creator in contest with his pen and ink creations that propelled the series. Typically, the cartoons start out with live action showing the cartoonist (Max) beginning his day. He begins drawing the characters on paper, or he opens the inkwell and they come out and interact with reality.

In 1955, "Out of the Inkwell," along with 2,500 other pre-1950 Paramount shorts and cartoons were sold to television packagers, the majority acquired by U.M.&M. TV Corporation. In 1958, Max Fleischer reactivated his studio in a partnership with Hal Seeger, and in 1960 produced a series of 100 Out Of The Inkwell five minute cartoons. In the new color series, KoKo had a clown girlfriend named KoKette and a villain named Mean Moe. Larry Storch provided the voice for KoKo and all of the supporting characters.

Media related to Out of the Inkwell at Wikimedia Commons

Media related to The Tantalizing Fly at Wikimedia Commons