Ometepe is an island formed by two volcanoes rising from Lake Nicaragua in the Republic of Nicaragua. Its name derives from the Nahuatl words ome (two) and tepetl (mountain), meaning two mountains. It is the largest island in Lake Nicaragua as well as the largest volcanic island inside a fresh water lake in the world.

The two volcanoes, Concepción and Maderas, are joined by a low isthmus to form one island in the shape of an hourglass. Ometepe has an area of 276 km². It is 31 km long and 5 to 10 km wide.[1] The island has a population of 42,000, and an economy based on livestock, agriculture, and tourism. Plantains are the major crop.

As of June 2010, it is scheduled to be named a UNESCO Biosphere Preserve.[2]

The island first became inhabited in the Dinarte phase (ca 2000-500 BC), although evidence is questionable. The first known inhabitants were Nahua Indians from Mexico. In their footsteps came the Niquirano Indians, who established an important settlement on the island. Their ceramics and monuments still amaze.[citation needed] Traces of this past can still be found in petroglyphs and stone idols on the northern slopes of Maderas volcano. The oldest date from 300 BC.

After the Spaniards had conquered the Central American region in the 16th century, pirates began prowling Lake Nicaragua. They came in from the Caribbean Sea via the San Juan River. The inhabitants of Ometepe were hard hit. The pirates robbed them of their women, animals, possessions and harvest. They also erected settlements on the shore, making it their refuge. This made the local population, seeking shelter, move to higher grounds on the volcanoes. The island was finally annexed, through settlement, by the Spanish conquistadors at the end of the 16th century. But French, English (such as Francis Drake) and Dutch pirates still endangered the island until the late 17th century.

The most important villages on the island are Altagracia (pop. 4081), on the eastern side, and Moyogalpa (pop. 2905), with its harbor on the northwestern side of the island. These two villages are the centers of the two municipalities, between the island is divided. Many traditions are kept alive. They celebrate more religious and folk festivals than anywhere in Nicaragua.

Today, Ometepe is developing tourism and ecotourism, with the archaeological past and the bounty of its nature sanctuary, the exotic vegetation, animal and bird life as drawcards. There are plans to construct an international airport on the island. [3]

View of Concepcion Volcan from Maderas Volcano looking across the isthmus.

Volcán Concepción (once named Ometepe volcano) is the northwest half of the island. Concepción is a symmetrical cone, and is an active volcano (Baker, 2006). Concepción volcano rose in the early Holocene Epoch and, through continual eruptions, now reaches an altitude of 1 610 m. It is the world's highest lake island. This volcano is considered the most perfectly formed volcano cone in Central America. The volcano went through a long quiet period, but on 8 December 1880 Concepción came back to life. This eruption was extensive, and the volcano remained active for a year. More eruptions followed in 1883, 1889, 1902, 1907, and 1924. In 2005, an earthquake measuring 6.2 on the Richter scale occurred as a result of increasing pressure within the active Concepción volcano. Cracks appeared in the roads on Ometepe and advice to leave the island was issued. This was the first minor eruption since 1999. The most recent eruption was in 2010. This eruption was extremely violent; however few of the island's inhabitants heeded the order from the government in Managua to evacuate the island.

The southeast half of the island consists of Volcán Maderas, which has a crater lake and supports a diverse rainforest environment. This volcano also arose in the Holocene Epoch, and rises 1 394 m above sea level. It is considered extinct or dormant. A large lagoon formed in its crater, and was discovered on 15 April 1930 by the farmer Casimiro Murillo. It is covered with coffee and tobacco plantations and the remaining rain forest. This volcano is a perfect destination for the ecotourist with a notable hike originating from Finca Magdalena[4]. Much of this part of the island is now a nature reserve.

The volcanic ash has made the soil of this island extremely fertile, allowing continuous planting without fallowing. The volcanoes are visible from everywhere on the island, and life on Ometepe revolves closely around them. They also play an important part in the myths and legends of the island, which once served as an Indian burial ground. 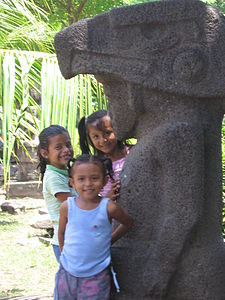 Ometepe Island is generally included within the archaeological area of “Greater Nicoya,” which also encompasses the Rivas area on the lake shore and descends into Costa Rican Nicoya Peninsula. Due to the deposits of volcanic ash over the millennia, the soil is very fertile, allowing constant planting without fallowing. This rich environment has allowed the island to be continuously inhabited since the Dinarte phase (ca. 2000 – 500 B.C.). There is a classified “Ometepe period” (A.D. 1350–1550) Greater Nicoyan Period, which corresponds to Mesoamerican Postclassic period. This period is associated with the migration of the Nicarao (Nahua speakers) into the area of Greater Nicoya (McCafferty & Steinbrenner, 2005).

The archaeologists who have done fieldwork on the island over the years are:

Dr. Gordon Willey and Albert Norweb excavated the Cruz site (named after the Cruz Hacienda), on the North East part of the island. This site is important because it produced nearly 30,000 sherds, most of which belonged to the Late Polychrome Period. The upper levels of the site produced the diagnostic ceramic types which came to define the Late Polychrome Period for the whole of the Rivas area. Pieces were also found from the San Jorge phase of the Zoned Bichrome Period (Healy, 1980).

The Ceramic Type "Ometepe Red Slipped-Incised" is found on Ometepe Island. It is a Late Polychrome Period ceramic type, and it is usually found in the form of jar sherds. This type of ceramic is identifiable because it is scraped on both the inside and out, and smoothing and polishing is done on the exterior body and rim. The slip, over the rim and outside, is a dull red to brown, while only the inside of the neck is slipped. Lines are cut into the lip of the jar, and triangles are the most common motif, either interlocking or meeting tip to tip. Other ceramic types found on the island include: Granada Polychrome from the Middle Polychrome Period, Castillo Late Polychrome, and Luna Ware Polychrome (Healy, 1980). 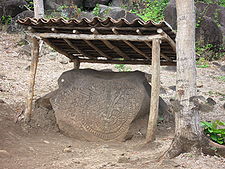 Petroglyph on Ometepe at base of Maderas

The Ometepe Petroglyph Project was a volunteer field survey of the Maderas half of Ometepe from 1995–1999. This project intensively surveyed 15 km of the Maderas half of the island over five field seasons. The project mapped 73 archaeological sites within this 15 km area, including almost 1700 petroglyph panels on 1400 boulders.

Of the 73 sites surveyed by the Ometepe Petroglyph Project, petroglyphs were recorded at all but one. Many of the petroglyphs on Ometepe contain spirals, and “meander” across the rock face. Stylized turtles are a common motif for the area.

The petroglyphs of Ometepe include some forms which are less common. Figures in many of the depictions are described as having “bowling ball faces” on human figures. As noted above, spirals are common, and are apparently used in several ways. Two attached spirals appear to represent the island, with its two volcanoes. Spirals also are used to depict the head of anthropomorphic figures.

Some of the unusual formations seen within the petroglyphs on Ometepe include seats or steps carved into boulders, ovals, and big grooves. The purpose behind these forms has not yet been explained.

Between the 1995 and 1996 field seasons, ten sites were recorded. The greatest concentration of petroglyphs was noted at N-RIO-3, probably recorded by Haberland as Om-38. Located along the slopes and at the top and of a ridge, the site contains 82 boulders with petroglyphs, six mortars, two metates and a scatter of ceramics and chert lithics. Of the 149 petroglyphs recorded during 1996, most were located on land owned by the cooperative at the hacienda. When the program was expanded in 1997, to include volunteers, 20 volunteers participated in recording fifteen additional sites. The most impressive site, N-RIO-19, was greater than 180,000 square meters in area. Ninety-two petroglyphs, over 30 house mounds, stone statuary fragments, and pottery from at least three different periods of occupation were recorded at the site, and the material was being studied in Managua.

The Ometepe Petroglyph project is an interesting example of modern technology assisting in the recording of archaeological sites. As the prehistoric art sited were being surveyed and recorded, pictures were and taken of each site in both black and white. A video was even made at one site. Photos were then uploaded into a computer, and the Photoshop program was then use to increase the contrast of the photos, increasing the visibility of the petroglyphs pictured. This allowed for a more accurate record of sites that by necessity were photographed in less than ideal conditions and lighting. In addition to the remote area and poor lighting, on Ometepe Island, the depth of the engraved lines on petroglyphs thus far recorded varies from “immeasurably shallow” to around three centimeters (Ometepe Petroglyph Project Website, 2006).

Ometepe harbors large populations of the White-faced Capuchin monkey, also called White-headed Capuchin, (Cebus capucinus) and populations of the Mantled Howler monkey (Alouatta palliata). Efforts are being made to study and protect these animals. The Ometepe Biological Field School is situated on the Maderas side of the island. Here, students and scientists from all over the world come to study the unique flora and fauna of the area. The lake surrounding Ometepe harbours many species of aquatic animals, notably the Nicaragua shark, which until recently was thought to be a unique species of freshwater shark, but has since been shown to be continuous with ocean-populations.[5] Small populations of spider monkeys (Ateles s.) inhabit very small islands within Lake Nicaragua. These populations exist solely due to humans and many of the local fishermen routinely stop by and feed these troops. The local form of the rice rat Oryzomys couesi is distinctive and may represent a separate subspecies.[6]