National Irish Bank
Not to be confused with National Bank of Ireland.

It is the fourth largest main street bank in the Republic of Ireland and offers a full range of commercial and personal banking products. It is part of the Laser payment system.

The bank suffered a scandal in its personal banking division in the 1990s (see history, below). However it has undergone substantial change as a result of its acquisition by Danske Bank, with a new look and product offering unveiled on 18 April 2006. It ceased to be an Irish private limited company by shares on 1 April 2007, and now trades as a division of Danske Bank. It has 66 branches, 649 employees and 167,000 customers. 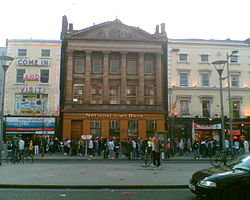 Former National Irish Bank branch on O'Connell Street in Dublin. The pediment, by John Steell, depicts the Parable of the Wise and Foolish Virgins.[1]

In 1987, both banks were acquired by National Australia Bank Limited. In 1988 the Republic of Ireland operation was renamed National Irish Bank Limited whilst Northern Bank Limited remains the name of the Northern Ireland operation. Nonetheless, a single management team continued to run both banks, which shared many services and back office functions. During this era, the logo of the National Irish Bank was that of the National Australia Bank (at the time), except that the red star had been recoloured green, and "Irish Bank" was added alongside the word "National". The original Northern Bank (Ireland) logo had been the Midland Bank griffin.

In 1998, John Lacey had been appointed CEO of NIB. He was briefed to spearhead a campaign to raise the bank’s profile, which included innovations such as lower interest rates. Lacey commissioned a high-profile advertising campaign, featuring fictitious NIB manager Martin, who would repeatedly call his cousin Niall about the great deals the bank was offering.[2]

In 1993, Irish crime lord Martin Cahill planned a raid on NIB, using then CEO Jim Lacey and his family as hostages to extract upto €10 million in cash. In early 1993 John "The Coach" Traynor met with his boss Cahill to provide him with inside information about the inner-workings of NIB at College Green, Dublin. Traynor told Cahill that the bank regularly held more than €10 million in cash in the building. The plan was to abduct Lacey, his wife and four children and take them to an isolated hiding place. There they would be held with fellow gang member, but acting as a "hostage" Jo Jo Kavanagh, who would frighten Lacey into handing over every penny stored in the bank's vaults.[3]

On 1 November 1993, Cahill's gang that included Brian Meehan seized Lacey and his wife outside his home in Blackrock.[2] Holding them at Lacey's home, Kavanagh was brought in and tied up, telling the family that he had been abducted two weeks before. On 2 November, Kavanagh drove Lacey to College Green to collect the ransom money, with Lacey eventually withdrawing IR£300,000 from an accessible cash machine.[2] Kavanagh then drove the pair and the money to the local Gardi station, where he told them the pair had been kidnapped and forced to take part in a robbery.[3]

With a ransom note requesting payment of €10 million in cash, the Gardi began investigating. They quickly found that Kavanagh had claimed child allowance during his two week "capture," and so arrested him. Cahill then planned with Kavanagh to "raid" Kavanagh's home, and show intent to kill the Lacey family by shooting Kavanagh in the leg. Kavanagh was then to call the Irish newspapers from his hospital bed, and claim he was a victim of the Lacey kidnapping gang.[3]

However, the plan failed, and the gang were arrested. Released on bail, in 1994, Cahill was murdered by a claimed Irish Republican Army hitman close to his home in Rathmines, who had been paid for by rival drug gang crime lord and former Cahill gang member John Gilligan. In 1997, Kavanagh was jailed for 12 years for offences connected with the Lacey kidnapping.[3]

Dismissed by National Australia Bank in 1994, Lacey was subsequently appointed CEO of publishers Lafferty, and also appointed chairman of the Irish Aviation Authority and the Dublin Docklands Development Authority.[2] However, he resigned these positions in 1998 after a report on RTE was further investigated by High Court of the Republic of Ireland. After subsequently appointing inspectors in Dublin,[4] Their report conclusions were:

Following the Inspectors' report, the Director of Corporate Enforcement took disqualification proceedings against nine former NIB personnel, none of whom has been employed by NIB since the 1990s.[5]

The bank adopted the logo of Danske Bank, albeit with the word "Danske" replaced by "National Irish". The bank was formally relaunched on 18 April, with a new product offering, and a revamped internet banking system. Among the innovations is the use of text messages to communicate with customers.

In December 2009 National Irish Bank announced that it was launching a restructuring programme, this would involve closing 25 of its branches and also changing is banking model. Beginning in early 2010 National Irish Bank began moving away from a 'Cash Bank' to 'Cashless'. The first of these branches to go cashless were Malahide and Dun Laoghaire branches. By the middle of 2011 National Irish Bank will become a completely cashless bank and will no longer be accepting cash for lodgments. The bank announced that they would be looking at possible third parties to accept cash lodgments.

Further on from the announcement that National Irish Bank will be moving towards a cash-free operation An Post has been announced as the third party who will accept lodgments on behalf of NIB. This will come into effect from the 1st of November. It will mean that all National Irish Bank customer will be able to lodge cash they may have in any An Post office around the country, currently there are over 1200 An Post branches in ROI.

The Killester, Dublin branch (known as Howth Road branch) of National Irish Bank was the scene of a 'tiger robbery' on 29 August 2006 when a 23-year old employee was kidnapped by an armed gang. The bank handed over a ransom of €270,000 without informing or involving the Garda Síochána. The Garda Siochana heavily criticized this action, stating that it leaves the bank exposed in the future to replica attacks.[6] However, the Howth Road branch has since became a cashless branch.