Vine
This article is about the term "vine" in its broad sense. For grapevines, see Vitis. For other uses, see Vine (disambiguation). 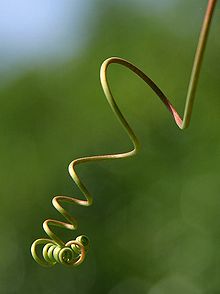 A vine (Latin vīnea "grapevine", "vineyard", from vīnum "wine") in the narrowest sense is the grapevine (Vitis), but more generally it can refer to any plant with a growth habit of trailing or scandent, that is to say climbing, stems or runners. The word also can refer to such stems or runners themselves, for instance when used in wicker work.[1][2] 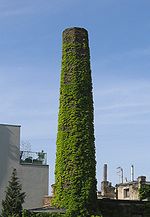 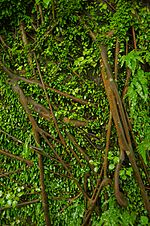 A vine displays a growth form based on long stems. This has two purposes. A vine may use rock exposures, other plants, or other supports for growth rather than investing energy in a lot of supportive tissue, enabling the plant to reach sunlight with a minimum investment of energy. This has been a highly successful growth form for plants such as kudzu and Japanese honeysuckle, both of which are invasive exotics in parts of North America. There are some tropical vines that develop skototropism, and grow away from the light, a type of negative phototropism. Growth away from light allows the vine to reach a tree trunk, which it can then climb to brighter regions.[3]

The vine growth form may also enable plants to colonize large areas quickly, even without climbing high. This is the case with periwinkle and ground ivy. It is also an adaptation to life in areas where small patches of fertile soil are adjacent to exposed areas with more sunlight but little or no soil. A vine can root in the soil but have most of its leaves in the brighter, exposed area, getting the best of both worlds.

A climbing habit has evolved independently in several plant families, using many different climbing methods.[4] Some plants climb by twining their stems around a support (e.g., morning glories, Ipomoea species). Others climb by way of adventitious, clinging roots (e.g., ivy, Hedera species), with twining petioles (e.g., Clematis species), or using tendrils, which can be specialized shoots (Vitaceae), leaves (Bignoniaceae), or even inflorescences (Passiflora). Others climb through the use of thorns, which pierce the support (e.g. climbing rose); or by other hooked structures, such as hooked branches (e.g. Artabotrys hexapetalus). The climbing fetterbush (Pieris phillyreifolia) is a woody shrub-vine which climbs without clinging roots, tendrils, or thorns. It directs its stem into a crevice in the bark of fibrous barked trees (such as bald cypress) where the stem adopts a flattened profile and grows up the tree underneath the host tree's outer bark. The fetterbush then sends out branches that emerge near the top of the tree.[5] Species of Parthenocissus (Vitaceae) produce twining tendrils that are modified stems, but which also produce adhesive pads at the end that attach themselves quite strongly to the support. The evolution of a climbing habit has been implicated as a key innovation associated with the evolutionary success and diversification of a number of taxonomic groups of plants.[6] 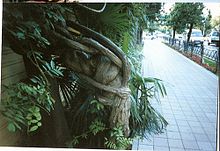 A large vine on the street in Sochi, Russia

Most vines are flowering plants. These may be divided into woody vines or lianas, such as wisteria, kiwifruit, and common ivy, and herbaceous (nonwoody) vines, such as morning glory.

One odd group of vining plants is the fern genus Lygodium, called climbing ferns. The stem does not climb, but rather the fronds (leaves) do. The fronds unroll from the tip, and theoretically never stop growing. In the meantime, they can form thickets as they unroll over other plants, rockfaces, and fences.

Use as garden plants

Gardeners can use the tendency of climbing plants to grow quickly. If a plant display is wanted quickly, a climber can achieve this. Climbers can be trained over walls, pergolas, fences, etc. Climbers can be grown over other plants to provide additional attraction. Artificial support can also be provided. Some climbers climb by themselves; others need work, such as tying them in and training them.

Some types of vines 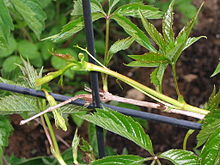 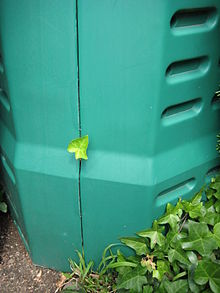 Ivy growing out of a compost container