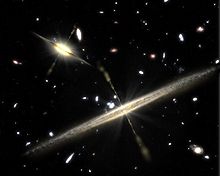 Galaxy morphological classification is a system used by astronomers to divide galaxies into groups based on their visual appearance. There are several schemes in use by which galaxies can be classified according to their morphologies, the most famous being the Hubble sequence, devised by Edwin Hubble and later expanded by Gérard de Vaucouleurs and Allan Sandage.

The Hubble sequence is a morphological classification scheme for galaxies invented by Edwin Hubble in 1936.[1] It is often known colloquially as the “Hubble tuning-fork” because of the shape in which it is traditionally represented. Hubble’s scheme divides galaxies into 3 broad classes based on their visual appearance (originally on photographic plates): 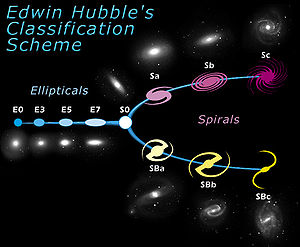 These broad classes can be extended to enable finer distinctions of appearance and to encompass other types of galaxy, such as irregular galaxies, which have no obvious regular structure (either disk-like or ellipsoidal).

The Hubble sequence is often represented in the form of a two-pronged fork, with the ellipticals on the left (with the degree of ellipticity increasing from left to right) and the barred and unbarred spirals forming the two parallel prongs of the fork. Lenticular galaxies are placed between the ellipticals and the spirals, at the point where the two prongs meet the “handle”.

To this day, the Hubble sequence is the most commonly used system for classifying galaxies, both in professional astronomical research and in amateur astronomy. 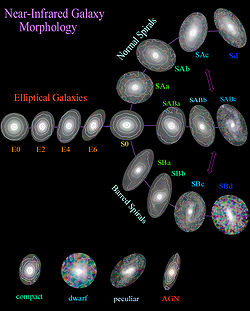 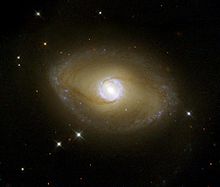 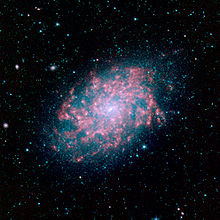 The de Vaucouleurs system for classifying galaxies is a widely used extension to the Hubble sequence, first described by Gérard de Vaucouleurs in 1959.[2] De Vaucouleurs argued that Hubble's two-dimensional classification of spiral galaxies—based on the tightness of the spiral arms and the presence or absence of a bar—did not adequately describe the full range of observed galaxy morphologies. In particular, he argued that rings and lenses were important structural components of spiral galaxies.[3]

The different elements of the classification scheme are combined - in the order in which they are listed - to give the complete classification of a galaxy. For example, a weakly barred spiral galaxy with loosely wound arms and a ring is denoted SAB(r)c.

Visually, the de Vaucouleurs system can be represented as a three-dimensional version of Hubble’s tuning fork, with stage (spiralness) on the x-axis, family (barredness) on the y-axis, and variety (ringedness) on the z-axis.[4]

The use of numerical stages allows for more quantitative studies of galaxy morphology.

The Yerkes (or Morgan) scheme

Created by American astronomer William Wilson Morgan. Together with Philip Keenan, Morgan developed the MK system for the classification of stars through their spectra. The Yerkes scheme uses the spectra of stars in the galaxy; the shape, real and apparent; and the degree of the central concentration to classify galaxies.

So, for example, the Andromeda Galaxy is classified as kS5.