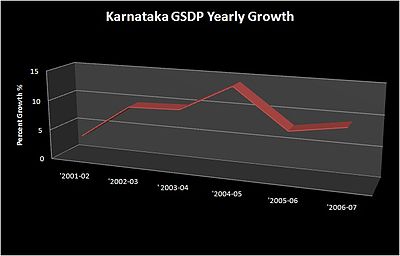 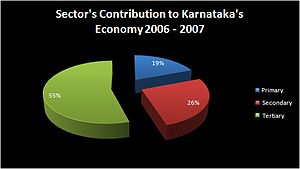 Karnataka is one of the high economic growth states in India with the expected GSDP (Gross State Domestic Product) growth of 8.2% in the fiscal year 2010-2011[1][2]. The total expected GSDP of Karnataka in 2010-2011 is about Rs. 2719.56 billion.[2] . Per capita GSDP during 2008–2009 was US$ 1034.9[2]. Karnataka recorded the highest growth rates in terms of GDP and per capita GDP in the last decade compared to other states. In 2008-09, the tertiary sector contributed the most to the GSDP amounting to US$ 31.6 billion (55 percent), followed by the secondary sector, contributing US$ 17 billion (29 percent, and the primary sector‘s contribution amounting to US$ 9.5 billion (16 percent). With an overall GDP growth of 56.2% and a per capita GDP growth of 43.9% in the last decade, Karnataka surpassed all other states in India, pushing Karnataka's per capita income in Indian Rupee terms to sixth place.[3] Karnataka received US$2,026.4 million worth of Foreign Direct Investment for fiscal year 2008-09 placing it at third spot among states in India.[4] At the end of 2004, the unemployment rate of Karnataka was 4.57% compared to a national rate of 5.99%.[5] For the fiscal year 2006-07 the inflation rate of Karnataka was 4.4% which was less than the national average.[6]

Sectors in the economy

A fiscal year in Karnataka begins on April 1 of the previous calendar year and ends on March 31 of the year with which it is numbered. The different entities that contribute to the economy are broadly classified into three sectors:[7] 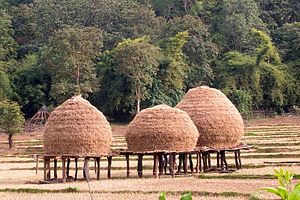 Haystack on stilts in paddy fields of Uttara Kannada district

For many rural residents of Karnataka, agriculture is the major occupation. A total of 123,100 km² of land is cultivated in Karnataka constituting 64.6% of the total geographical area of the state.[9] According to the 2001 census, farmers and agricultural labourers formed 56% of the workforce of Karnataka.[10] Agriculture in Karnataka is heavily dependent on the southwest monsoon since the extent of arid land in the state is second only to Rajasthan.[10] Only 26.5% of sown area (30,900 km²) is subjected to irrigation.[9] The state has three agricultural seasons – Kharif (April to September), Rabi (October to December) and Summer (January to March).[9] The main crops grown here are rice, ragi, jowar, maize, and pulses (Tur and gram) besides oilseeds and number of cash crops.[9] Cashews, coconut, arecanut, cardamom, chillies, cotton, sugarcane and tobacco are among the other crops produced in the state. Karnataka is the largest producer of coarse cereals,[11] coffee[12] and raw silk[13] among the states in India. Horticultural crops are grown in an area of 16,300 km² and the annual production is about 9.58 million tons.[9] The income generated from horticulture constitutes over 40% of income generated from agriculture and its is about 17% of the state's GDP.[9] In floriculture, Karnataka occupies the second position in India in terms of production and 700 tons of flowers (worth Rs. 500 million) were produced in 2004-05.[9]

A majority of the 3500 crore silk industry in India is headquartered in Karnataka State, particularly in the North Bangalore regions of Muddenahalli, Kanivenarayanapura, and Doddaballapura the upcoming sites of a 70 crore "Silk City".[14][15]

Education is an important industry for Karnataka. It boast one of the largest concentration of Higher educational institutions like Medical and Engineering colleges. Apart from Bengaluru places like Belagavi(Belgaum), Mangalore, Mysore, Hubli-Dharwad and Davangere have been producing professionals for IT industry. A large number of professionals educated in Karnataka can be seen all over India and the World.Muddenahalli-Kanivenarayanapura, in North Bangalore, are the sites of the upcoming Sri Sathya Sai Baba University and College of Medicine, Indian Institute of Technology Muddenahalli, and 600 Crore Visvesvaraya Institute of Advanced Technology.[16][17] Devanahalli is set to be the location of a 9500 Crore Devanahalli Business Park, which will contain Aerospace Education Special Economic Zones, near the Bangaluru International Airport. The North Bangalore region is set to be a premier educational hub of Karnataka [18] These developments are set to contribute significantly to Karnataka's economy by creating jobs, expanding educational opportunities, and spurring infrastructure development.

Other heavy industries such as National Aerospace Laboratories, Bharat Heavy Electricals Limited, Indian Telephone Industries, Bharat Earth Movers Limited (BEML), Bharat Electronics Limited, Hindustan Machine Tools and Indian subsidiaries of Volvo and Toyota are also headquartered in Bangalore. India's national space agency Indian Space Research Organization (ISRO) is headquartered in Bangalore and employs approximately 20,000 people. TVS Motors has a motorcycle manufacturing plant at Mysore and Tata Motors at Dharwad. Karnataka state has many companies engaged in manufacturing of electrical equipment and machinery like Kirloskar, ABB, Kavika, Larsen and Toubro etc. This may be due to the location of the Central Power Research Institute (CPRI) at Bangalore.

Gold, iron ore, quartz, limestone, manganese, kyanite and bauxite are some of the minerals that are found in Karnataka.[19] After the closure of the Kolar Gold Fields mine in Karnataka, the only company in India that produces gold by mining and extracting it from the ore is Hutti Gold Mines Limited that has plants at Hutti and Chitradurga in Karnataka.[20] Major mines of manganese and iron ore are located at Sandur in Bellary district.[21] Visweswaraiah Iron and Steel Ltd. at Bhadravathi and Jindal Vijayanagar Steel Ltd. at Toranagal are engaged in the production of iron and steel. Indian Aluminium Company Ltd (Hindalco) has an aluminium plant near Belgaum.[22] Mysore Minerals Limited is in the mining and production of chromite in Hassan district.[22] Rajashree Cements at Adityanagar, Vasavadatta Cements at Sedam and The Associated Cement Company Ltd. at Wadi are engaged in the production of cement.[22]. Uranium deposits have recently been found in Deshnur, a small village near Belgaum.

For more details on this topic, see Software industry in Karnataka. 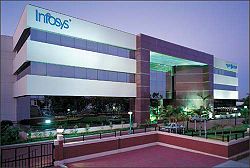 Infosys Headquarters in Bangalore. More than 50% of all software companies in India are located in Karnataka

Karnataka is the leader in the information technology sector in India and its capital Bangalore is known as the Silicon Valley of India. In the IT sector, Karnataka generated a total revenue of Rs. 516.5 billion in the financial year 2006-07 which included Rs. 487 billion from software exports and Rs. 29.5 billion from hardware exports.[23] A total of 1973 companies in Karnataka are involved in Information Technology-related business.[23] While the bulk of the IT related companies are located in Bangalore, some companies are located in Mysore, Mangalore and Hubli as well. Bangalore is also the headquarters of Wipro and Infosys which are among the top three IT companies in India with respect to market capitalization.[24] The Nandi Hills area in Devanahalli outskirts is the site of the upcoming $22 Billion, 50 square kilometer BIAL IT Investment Region, one the largest infrastructure projects in the history of Karnataka.[25]

As of June 2006, Karnataka housed 55% of biotechnology related companies in India.[26] Bangalore is also the home of the largest biocluster in India with total revenues of Rs. 14 billion and having 158 of the 320 companies working on biotechnology in India.[26] Karnataka has a headcount of over 6800 scientists involved in biotech research and out of 28 biotech companies that were registered in India in the year 2005-06, 27 were located in Karnataka.[26]

For more details on this topic, see Banking in Karnataka.

Karnataka, particularly the coastal districts of Dakshina Kannada and Udupi kave a premier position in banking in India.[27] This is because seven of the country's leading banks, Canara Bank, Syndicate Bank, Corporation Bank, Vijaya Bank, Karnataka Bank, Vysya Bank and the State Bank of Mysore originated from this state.[27] The first five in the above list of banks were established in the districts of Udupi and Dakshina Kannada. These districts have among the best distributions of banks in India—a branch for every 500 persons.[28] Between 1880 and 1935, 22 banks were established in coastal Karnataka, nine of them in the city of Mangalore.

As of March 2002, Karnataka had 4767 branches of different banks servicing the people of the state.[29] The number of people served by each branch was 11,000 which is lesser than the national average of 16,000, thereby indicating better penetration of banking in the state.[29]

Road inventory The state is well connected to its six neighbouringstates and other parts of India through 14 National Highways (NH); it accounts for about six percent of the total NH network in India.

The state has five domestic airports at Bangalore, Mangalore, Hubli, Mysore and Belgaum.

International flights operate from the international airports at Bangalore and Mangalore.

New BengaluruInternational Airport developed under a Public Private Partnership framework at Devanahalli, in the outskirts of Bangalore started operations in May 2008.

Fourth busiest airport in India (after Mumbai, Delhi and Chennai)

State well-connected to other parts of the country

Intrastate rail connectivity, especially on the key lines for passenger and freight movements, needs to be augmented.

Metro rail and mono-rail projects are underway in Bangalore. The first phase of the Namma Metro as it is called will cover a total of 42.3 km.

Key connectivity projects, doubling of Mysore–Bangalore railway line, Gadan–Bagalokot, Bangalore–Hassan to be taken up in near future.

KPCL has an installed capacity of over 9315 MW

Plants for another 4,000 MW are in the pipeline

Last Mile Access is provided by BSNL as well as TATA Tele Services in various parts of the state. Bhartiand Reliance Communications provide the Last Mile Access directly to the customer in all major cities in Karnataka.

Karnataka Industrial Area Development Board (KIADB) and Karnataka State Industrial Investment Development Corporation (KSIIDC) are jointly responsible for the development of industrial infrastructure in the state.

Directorate of Commerce and Industries has set up district and talukindustrial centresacross the state to facilitate investment.

The Government of Karnataka is promoting the development of several SEZs across Karnataka such as pharmaand biotech SEZ, food processing and agro-based industries and textiles SEZ at Hassan and IT and Coastal SEZs at Mangalore.

Usually water supply is provided by the local authorities like municipalities and panchayats. The first hydroelectric plant in the state was built at Sivasamudram Falls on the Kaveri River in 1902.[30]