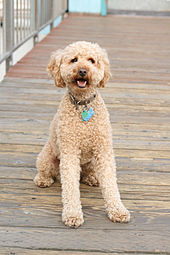 A Labradoodle, a crossbred between a Poodle and a Labrador Retriever

A crossbreed or crossbred usually refers to an animal with purebred parents of two different breeds, varieties, or populations. Crossbreeding refers to the process of breeding such an animal, often with the intention to create offspring that share the traits of both parent lineages, or producing an animal with hybrid vigor. While crossbreeding is used to maintain health and viability of animals, irresponsible crossbreeding can also produce animals of inferior[clarification needed] quality or dilute a purebred gene pool to the point of extinction of a given breed of animal.

The term is also used at times to refer to a domestic animal of unknown ancestry where the breed status of only one parent or grandparent is known, though the term "mixed breeding" is technically more accurate. The term outcross is used to describe a type of crossbreeding used within a purebred breed to increase the genetic diversity within the breed, particularly when there is a need to avoid inbreeding.

In general use, the term hybrid is commonly used to refer to plant breeding, such as that of maize, though "hybrid" is also used to describe crosses between animals of the same genus but different species, such as the mule. "Crossbred" is more often used to refer to animal breeding within a single species.

In cattle, there are systems of crossbreeding. One is used when the purebred females are particularly adapted to a specific environment, and are crossed with purebred bulls from another environment to produce a generation having traits of both parents.[1]

The large number of breeds of sheep, which vary greatly, creates an opportunity for cross breeding to be used to tailor production of lambs to the goal of the individual stockman.[2]

A crossbred or hybrid dog is a cross between two (sometimes more) known breeds, and is usually distinguished from a mixed-breed dog, which has ancestry from many sources, some of which may not be known. Crossbreeds are popular, due to the belief that they have increased hybrid vigor without loss of attractiveness of the dog. Certain planned cross-breeding between purebred dogs of different breeds can produce puppies worth more than their purebred parents, due to a high demand.[citation needed] 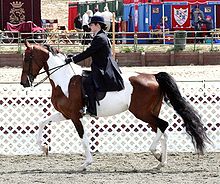 Crossbreeding in horses is often done with the intent of ultimately creating a new breed of horse. One type of modern crossbreeding in horses is used to create many of the warmblood breeds. Warmbloods are a type of horse used in the sport horse disciplines, usually registered in an open stud book by a studbook selection procedure that evaluates conformation, pedigree and, in some animals, a training or performance standard. Most warmblood breeds began as a cross of draft horse breeds on Thoroughbreds, but have, in some cases, developed over the past century to the point where they are considered to be a true-breeding population and have a closed stud book. Other types of recognized crossbreeding include that within the American Quarter Horse, which will register horses with one Thoroughbred parent and one registered Quarter Horse parent in the "Appendix" registry, and allow such animals full breed registration status as Quarter Horses if they meet a certain performance standard. Another well-known crossbred horse is the Anglo-Arabian, which may be produced by a purebred Arabian horse crossed on a Thoroughbred, or by various crosses of Anglo-Arabians with other Anglo-Arabians, as long as the ensuing animal never has more than 75% or less than 25% of each breed represented in its pedigree.

A hybrid animal is one with parentage of two separate species, differentiating it from crossbred animals, which have parentage of the same species. Hybrids are usually, but not always, sterile.[4]