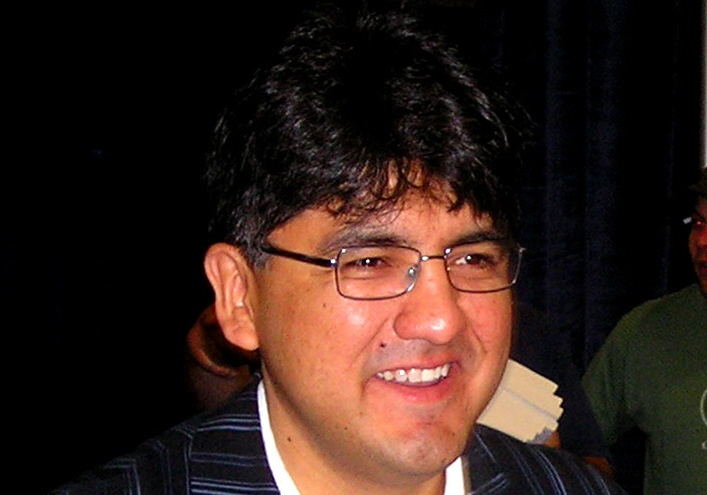 Sherman Joseph Alexie, Jr. (born , 1966) is an award-winning and prolific and occasional . Much of his writing draws on his experiences as a modern Native American. Sherman's best known works include "", "Smoke Signals", and "". He lives in Seattle, .

Alexie was born in and is of Spokane and Coeur d'Alene heritage. He grew up on the Spokane Indian Reservation in Wellpinit, , about 50 miles northwest of the city of Spokane.

He was born hydrocephalic ("with water on the brain"), and, at six months of age, underwent brain surgeries to correct the condition. His initial prognosis was grim; even after he survived in operations, doctors predicted that he would suffer . However, in spite of suffering from s, Alexie proved to be an extremely intelligent child, who says he learned to read at the age of three and by the age of five read adult novels such as 's "".

Alexie's intelligence caused problems with his peers at the reservation school, who saw him as an outcast and frequently bullied him. He opted instead to attend a nearby public high school in , about 20 miles south of Wellpinit. There he excelled in academics and athletics, becoming a star player and popular student.

Alexie graduated from high school in 1985 and entered in Spokane on a scholarship. After two years at Gonzaga, he transferred to (WSU) in Pullman. He initially planned to be a doctor but after fainting several times in his human anatomy class, he decided to choose a different career. He graduated with a B.A. in , becoming one of the first members of his tribe to earn a university degree. His completion of his degree was a bit unorthodox. He left WSU in 1990 believing he had not met the requirements for the degree, and spent the next few years explaining that he could never finish his United States History survey because when Indians disappeared a few weeks in, so did he. In 1994, the director of the American Studies Program, Susan Armitage, examined his academic records and found that he had completed the requirements, but missed a minor administrative procedure. The degree was thus awarded that spring in a special ceremony , while he was on campus for a reading.Fact|date=July 2007

Since 1991 Alexie has published 17 books, and has found success as a writer of s, short stories, poems, and s. Alexie's writing is marked by harsh depictions of reservation life, autobiographical elements, colorful use of humor, political outspokenness, seamless invocation of history and popular culture, and social commentary. He has also dabbled in and .In college, Alexie was encouraged to write by his poetry professor, . His rise in the world of writing was rapid: he earned a Washington State Arts Commission Poetry Fellowship in 1991 and the Poetry Fellowship in 1992.

Alexie's literary successes prompted him to give up drinking, an issue with which he had struggled in college. At age 23 he gave up drinking and has been sober since.

In 1993, Atlantic Monthly Press published his first complete collection of short stories, "The Lone Ranger and Tonto Fistfight in Heaven". The collection earned him a /Hemingway Award for Best First Book of Fiction and a Lila Wallace- Writers' Award. It was reissued, with the addition of two new stories, in March 2005 by Grove Atlantic Press.

Atlantic Monthly Press published Alexie's first novel, "Reservation Blues", in 1995. He was honored by the UK's "Granta" magazine as one of the Best Young American Novelists and won the 's , as well as the Murray Morgan Prize.

In June 1998, , Alexie competed in the World Poetry Bout Association (WPBA) and won his first World Heavyweight Poetry Bout, beating out world champion . He successfully defended his title three times, becoming the first and only poet to hold the championship for four consecutive years.

Alexie, alongside seven others, presented in the PBS "" Dialogue on Race with President Clinton in 1998. Jim Lehrer moderated the discussion, which aired on PBS on July 9, 1998. Alexie has also been featured on "" and "". He wrote a special segment on insomnia and his writing process called "Up All Night." for "NOW" with .

At the Northwest Comedy Festival in Seattle in April 1999, Alexie made his stand-up debut at the Foolproof. In July 1999, he was the featured performer at the Vancouver International Comedy Festival's opening night gala.

In February 2003, Alexie participated in the Museum of Tolerance project, "Finding Our Families, Finding Ourselves." This exhibit showcased the diversity within the personal histories of several noted Americans, and celebrated the shared experiences common to being part of an American family, encouraging visitors to seek out their own histories and heroes. He presented the Museum of Tolerance project as a guest on "" in January 2003, in the episode "Our Big American Family."

Alexie has also served as a juror for several writing awards, including the 1999 O. Henry Award, the 2000 inaugural PEN/Amazon.com Short Story Award, the Poetry Society of America's 2001 Shelley Memorial Award and the Poets and Writers "Writers Exchange 2001" Contest. He was a member of the 2000, 2001, 2005 & 2006 Independent Spirit Awards Nominating Committees. He has also served as a creative adviser to the Sundance Institute Writers Fellowship Program and the Independent Feature Films West (which has now been changed to Film Independent) Screenwriters Lab. Alexie most recently was a juror for the 2005 Rae Award.

At the 's 2003 commencement ceremony, Alexie was the commencement speaker. He was an Artist in Residence at the university and taught courses in American Ethnic Studies in 2004, 2006 and 2008. Recently, he earned the 2003 Regents' Distinguished Alumnus Award, Washington State University's highest honor for alumni. He also holds honorary degrees from (doctor of humanities, honoris causa - 2000) and Columbia College, Chicago (1999). Alexie has also worked as a mentor for the PEN Emerging Writers program.

Alexie's stories have been included in several prestigious short story anthologies, including "" 2004, edited by Lorrie Moore; and "" XXIX of the Small Presses. Alexie also served as the guest editor for the winter 2000-01 issue of ""

Alexie is also noted for his love of the sport of , both as a fan of the pro and college game, and a player of street ball, and has written extensively on the subject. He was a longtime fan of the , prior to the team's relocation to after the , and remains a fixture on the playgrounds of Seattle. His writings are frequently cited by notable basketball writers such as 's .

Prior to the relocation, the City of Seattle filed a lawsuit against the Sonics ownership group headed by businessman , in order to force the team to play out the remainder of its lease (which expired in 2010) in Seattle's . Alexie testified in the trial as to the importance of the Sonics to the Seattle community, an experience which he would later call the "most terrifying and stressful public speaking gig I've ever had to endure."