Dog hybrid
This article is about hybrids of two or more dog breeds. For hybrids of dogs with other species, see Wolf-dog hybrid. For dogs of unknown mixed origin, see Mixed-breed dog. 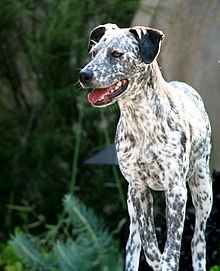 A dog hybrid is a crossbreed of two or more different recognized breeds of dog. 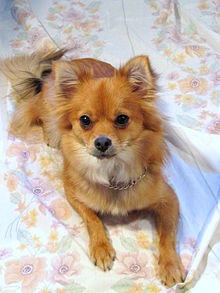 A Pomchi, a cross between a Pomeranian and Chihuahua.

The Encyclopædia Britannica traces the term "designer dog" to the late 20th century, when breeders began to cross purebred poodles with other purebred breeds in order to obtain a dog with the poodles' hypoallergenic coat, along with various desirable characteristics from other breeds.[1]

One connotation of the term "designer dog" is that the breeding is by design, between a deliberately chosen sire and dam, as opposed to an accidental breeding. A few breeders have taken this a step further, breeding a specific crossbreed to others of the same cross, setting a standard, and documenting the ancestry of puppies so bred over generations, in order to create a new breed of dog.[2]

The term "designer dog" has, however, taken on a new meaning, equating fads for crossbreed dogs with other "designer" accessories like purses and shoes. More recently, the term "designer dog" has started to ecompass some smaller ("handbag size") purebred dogs, such as the chihuahua and Pomeranian. Increased public demand for "designer dogs" has resulted in the proliferation of puppy mills cashing in on the fad. Puppy mills are set up to produce puppies as fast as the mother dogs can give birth. The offspring, who may already be in poor health, are shipped long distances to pet shops or are sold through newspapers and the internet. Transportation takes a toll on the pups, and many sicken and die on route.[3] 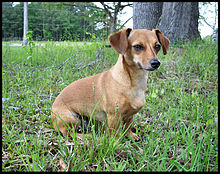 A Chihuahua and a Dachshund crossbreed, described with the portmanteau words "Chihuachshund", "Chiweenie", "Dachsihuahua", or "Doxiwawa"

The primary identifying mark of a crossbred "designer dog' is that the resulting puppies are called by a portmanteau word made up of syllables (or sounds) from the breed names of the two purebred parents, such as schnoodle (Schnauzer and poodle cross).[1] Other purebred breeds are being crossed to provide designer dogs described with an endless range of created labels, such as the Puggle (Pug and Beagle cross). There are even complex crosses (with multiple breeds in recent ancestry) are being labeled in this manner, such as German Chusky (German Shepherd Dog, Husky, Chow Chow).[4]

Like children in a family, a percentage of designer dogs with the same breed ancestry will look similar to each other, even though crossbreeding does not result in as uniform a phenotype as the breeding of purebreds. 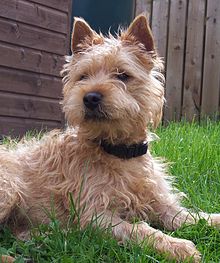 A Lakeland Terrier and a Patterdale Terrier crossbreed may be either a pet or a working terrier. Working dog hybrids are not typically given portmanteau word names.

Another defining characteristic of designer dogs is that they are usually bred as companions and pets. Working and hunting dogs deliberately crossbred for a particular working purpose are not generally given portmanteau names; they are most often referred to by a type (not breed) name, such as Eurohounds (racing sled dogs) or Lurchers (hunting dogs.) An exception to this is the Labradoodle, which although having a Portmanteau name, is often used as a Guide or Assistance dog.[citation needed]

Although designer dogs are often selected by owners for their novelty, an underlying motive for hybridization is an attempt to reduce the incidence of certain hereditary problems found in the purebred breeds used for the cross, while retaining their more appealing traits. Jon Mooallem in the New York Times writes, "Given the roughly 350 inherited disorders littering the dog genome, crossing two purebreds and expanding their gene pools can be “a phenomenally good idea,” according to one canine geneticist — if it is done conscientiously."[5] But crossbreeding for a particular style of designer dog may not work out as intended; instead of the desirable traits, the resulting litter may have a combination of the undesirable traits of the two purebred breeds.[citation needed] Wally Conron, the originator of the Labradoodle (bred as a hypoallergenic guide dog from a carefully selected sire and dam) in 1989, noted that although the first Poodle-Labrador Retriever breeding produced a success, "our next litter of ten labradoodles produced only three allergy-free pups."[6]

Crossbreeding has not been well studied in dogs, although it has been for livestock. The heritability of the desired trait being bred for (such as a hypoallergenic coat) needs to be known; "Heritability is the proportion of the measurable difference observed between animals for a given trait that is due to genetics (and can be passed to the next generation)."[7] Without that knowledge, it is far less likely for a crossbreeding to consistently achieve an intended appearance or behaviour than it is for a purebred breeding.[citation needed] In addition, the goals of dog crossbreeding may be harder to define than the goals of livestock crossbreeding; good temperament may be harder to define and measure than high calf weight.[citation needed]

Designer dog breeders are often criticised for being more interested in profitable puppy production than in dog health and welfare. Wally Conron comments on the popularity of crosses after his introduction of the Labradoodle: "Were breeders bothering to check their sires and bitches for heredity faults, or were they simply caught up in delivering to hungry customers the next status symbol?"[6] Designer dog puppies sometimes bring higher prices than the purebreds from which they are bred,.[8] Finding a breeder who does health testing and considers hereditary compatibility of breeding stock is as important for a designer dog as it is for a purebred.

The fanciers of designer dogs respond that all modern dog breeds were created from earlier breeds and types of dogs through the same kind of selective breeding that is used to create designer dogs. The Toy Poodle was bred down in size from larger poodles, most likely by crossing with various very small Bichon types, such as the Maltese and Havanese.[9] Most of the modern breeds have ancestries that include various older dog types and breeds; see individual breed articles for details of the origin of each breed. 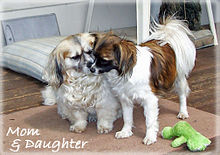 A parti sable spaniel mix with her daughter. The daughter took on many traits from her Papillon sire.

Health of dog hybrids depends on their being descended from healthy parents. Breeders who select their breeding stock for cost-effectiveness and who skip health testing for the same reason will not produce puppies that are as reliably healthy as those bred by more conscientious breeders. However, studies of longevity in dogs have found some advantage for crossbreeds compared to purebred dogs. "There was a significant correlation between body weight and longevity. Crossbreeds lived longer than average but several pure breeds lived longer than cross breeds, notably Jack Russell, miniature poodles and whippets" (thus only small and toy breeds, as to be expected).[10] In general it is believed that crossbreed dogs "have a far lower chance of exhibiting the disorders that are common with the parental breeds. Their genetic health will be substantially higher."[11]

Many breeders of designer dogs take advantage of the fact that people are impressed by a pet that is offers them an elevated social status, such as other "designer" goods do. "It’s human nature to aspire to own something a little different, a little fancy or in short supply."[12] 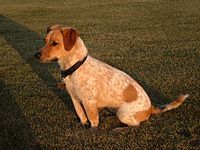 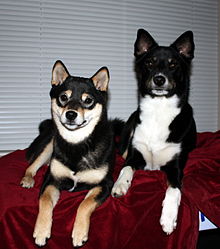 Crossbreed dogs may often inherit size and appearance from only one of their parents, as shown by the male Australian Shepherd/Shiba Inu mixed breed on the right being very similar in appearance and size to the pure bred female Shiba Inu on the left. Despite the Australian Shepherd being nearly 40 pounds heavier than the Shiba Inu and with very different fur, this hybrid dog inherited both its size and appearance from its mother.

Hybridization to take advantage of the increased chance that a recessive detrimental allele will only be inherited from one parent, and therefore not expressed in the phenotype of the offspring,[13][14] is only one strategy breeders can use to decrease the incidences of genetic defects. Knowing the disease incidence in the breed, and the genetic history of the individual, is ultimately important in dog breeding. Having the parental dogs genetically tested for defects known to be troublesome to their breed (or breeds, in the case of mixed parentage) may do as much, or more, than simply choosing dissimilar individuals with functional reproductive tracts. Genetic health must be approached from many angles. Some schemes are effective for the short-term, but disastrous in the long. Others are slow to take effect, but that effect is long-lasting.

Crossbreed dogs are not recognized by traditional breed registries, even if both parents are registered purebreds.

If dog hybrids are bred together for some period of time, and their breeding is well documented, they may eventually be considered a new breed of dog by major kennel clubs (an example of a recent hybrid becoming a breed recognised by all major kennel clubs is the Cesky Terrier) New breeds of dogs must have a breed club that will document the ancestry of any individual member of that breed from the original founding dogs of the breed; when the kennel club that the breed club wishes to join is satisfied that the dogs are purebred, they will accept and register the dogs of that breed. Each kennel club has individual rules about how to document a new breed. Some minor registries and internet registry businesses will register dogs as any breed the owner chooses with minimal or no documentation; some even allow the breeder or owner to make up a "breed name" for their pet.

Dog hybrids, created by breeding two purebred dogs of different breeds, may have the advantage of heterosis, or hybrid vigor. This advantage can be progressively diluted when two hybrids are bred in the attempt to create a breed, narrowing the gene pool. The best way to continue taking advantage of hybrid vigor is from the breeding of dogs with genetic diversity.[15] 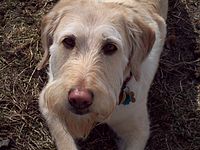 With the long-time popularity of the label cockapoo, used since at least 1960 and constructed by combining elements of its two contributing breeds (Cocker Spaniel/Poodle), it has become extremely common to find dog hybrids given labels likewise invented by portmanteau. The tendency for using such labels in a jocular way dates back at least to Queen Elizabeth's dorgis (Dachshund/Corgi). None of these have become recognised by any major registry as purebred breeds. However, as of 2006, the portmanteau words cockapoo and Labradoodle are found in some dictionaries. Label names such as these are most often found in for-sale ads, or on the websites that allow breeders to make up their own portmanteau word names for litters of hybrid puppies. The terms are only loosely descriptive and are seldom consistent; a cross between a Maltese and a Poodle, for example, may be advertised as either a "Maltipoo" or a "Moodle", and the cockapoo is also called a spoodle.

Among the trendier dog hybrids are Labradoodles and Cockapoos, which each have their own fancier associations and affinity groups. Many Poodle hybrids are also popular.