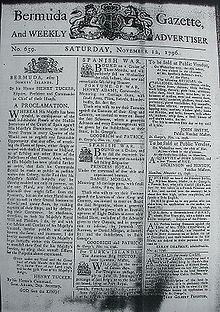 Bermuda Gazette of 12 November 1796, calling for privateering against Spain and its allies, and with advertisements for crew for two privateer vessels.

Commerce raiding or guerre de course (literally "war of the chase") is a form of naval warfare used to destroy or disrupt the logistics of an enemy on the open sea by attacking its merchant shipping, rather than engaging the combatants themselves or enforcing a blockade against them.[1]

Commerce raiding was heavily criticised by the naval theorist A.T. Mahan, who regarded it as a distraction from the destruction of the enemy's fighting power. Nevertheless, commerce raiding was an important part of naval strategy from the Early Modern period through up to and including the Second World War.

Usually, commerce raiding is chosen by a weaker naval power against a stronger, or by a nation with little ocean-going trade against one with a great deal. The best protection against a commerce raiding strategy is for merchant vessels to sail in convoy, protected by naval escorts.

The first sort of commerce-raiding was for nations to commission privateers — privately-owned ships authorised to attack and capture enemy merchants. Early instances of this type of warfare were by the British and Dutch against the Spanish treasure fleets of the 16th Century, and which resulted in financial gain for both Captain and crew upon capture of enemy vessels ("prizes").

This quickly became a major commercial enterprise, with privateer vessels, often in groups, being outfitted by venture capital, with investors also sharing in the returns. The practice rapidly spread. A privateer was distinguished from a pirate by the letter of marque, by which the vessel was commissioned as a private man-of-war. Captured vessels and cargo were submitted, in Britain's case, to Admiralty courts, where they might be condemned for sale, or, if the captures were not found to be within the rules of war, they might be released, sometimes with awards for damages.

During Britain's wars against revolutionary and Napoleonic France, the Royal Navy dominated the seas. France adopted a guerre de course strategy by licensing civilian privateers to seize British shipping. British East Indiamen of the time were therefore heavily armed to protect themselves against such raids, at the cost of considerable speed and maneuverability. Some East Indiamen such as the Arniston were successfully able to fend off these attacks that occurred in other parts of the world, however others as when the Kent met Robert Surcouf in 1800 were less fortunate.[2]

U.S. and British privateers were also actively raiding each other's shipping during the War of 1812. [3]

During the American Civil War, the Confederacy operated a fleet of privateers and naval commerce raiders. The naval raiders include the CSS Sumter, CSS Florida, CSS Alabama, and CSS Shenandoah. Most of the ships used in this period were built in Britain, which resulted in the Alabama Claims.

By the 1880s, the navies of Europe began to deploy warships made of iron and steel. The natural process that followed was more powerful guns to penetrate the new steel warships, which came with the inherent quality of more destructive power. No longer would navies fight for "prizes", in which capture of the enemy warship meant financial gain for Captain and crew, as well as their government when the prize and her cargo went under the hammer (only one warship was sunk at Trafalgar in 1805). The advent of steel and armor-piercing shells now meant the destruction and sinking of enemy "Men O' War". First seen at Sinope in 1853, the change was little appreciated until 1905, when at Tsushima seven battleships were sent to the bottom, and the only "prizes" were those that had voluntarily surrendered upon the high seas.

World War I saw Germany conducting a commerce war ("Handelskrieg") against Britain and her allies, principally with U-boats, but also with merchant raiders, and regular warships, and even occasionally with naval airships.[4]

During World War II, the Battle of the Atlantic saw Germany conducting guerre de course against Britain and its allies, again using U-Boats, auxilliary cruisers and small groups of warships.

Limitations set by the Treaty of Versailles meant Germany could not build a large battle fleet as she had in the time up to the World War I, and chose to covertly develop her submarines instead. U-Boats were cheaper and quicker to build than capital ships, and consequently Germany built up a submarine force rather than a surface fleet. This meant Germany was not able to fight a war of "guerre d'escadre" (battles between fleets), and therefore pursued guerre de course; what small numbers of surface warships Germany possessed, such as the Deutschland class cruisers, as well as her auxiliary cruisers also participated in this strategy. In addition, a number of commercial vessels were converted, perhaps the most famous being the Atlantis.

During World War II, elements of the United States Navy based in Brazil conducted operations in the Atlantic against German commerce raiders and blockade runners. In the Pacific, the U.S. Navy operated against Japanese merchant fleet shipping, as well as engating in offensive operations against ships of the Japanese Imperial Navy. The bulk of the Japanese merchant marine was sunk by American submarines. By the end of the war, Japan only had 12% of the tonnage of her pre-war shipping afloat.[5]

The Indian Ocean raid was a naval sortie by the Carrier Striking Task Force of the Japanese Navy from 31 March to 10 April 1942 against Allied shipping and bases in the Indian Ocean. It was an early engagement of the Pacific campaign of World War II.

The staff of the Imperial Japanese Navy decided to send some raiders to Indian Ocean waters during December 12, 1941-July 12, 1942.[6] The Germans had already been operating in the area and conducted mutual aid with Japanese submarines, in the form of re-supply and military intelligence.[7] The Indian Ocean was the largest operating area involving direct contact between the two Axis partners, in which their primary objective was to keep the pressure on the shipping lanes. The Japanese Navy participated in commerce raiding, but concentrated their efforts on hope of "decisive battle" in the Pacific.