The Chestnuts long barrow is a Neolithic chambered long barrow near Addington in the English county of Kent. It is one of a group of monuments known as the Medway megaliths.

The tomb was built in an area of extensive earlier Mesolithic activity which had been known from surface spotfinds. When the site was excavated in summer 1957 by its owner, Mr E. Boyle, stratified evidence of Mesolithic settlement was found directly beneath the barrow. Further work was undertaken in 1959 by J Alexander who found sherds of Grimston, Beaker and Peterborough ware as well as flint arrowheads. 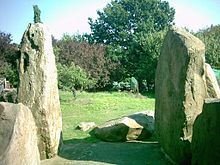 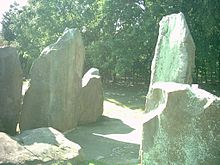 Twelve large sarsen stones remain visible, although badly eroded and damaged. As at the nearby Coldrum Stones the stones had not been set in socket holes by its builders. In plan the tomb was an oblong chamber, oriented east-west and blocked at both ends. It had a facade of four stones, two on either side of the eastern end. The chamber, covered by two capstones, was about 4m by 3m. and just over 2m tall. It was flanked by two large megaliths which dominate the site No evidence of a kerb has been identified and the capstones have since fallen and rest on the ground nearby.

Around 4,800 fragments of burnt bone, representing at least ten adults and one infant, were found in the chamber. The remains of a least three pots (in 50 fragments) also came from the chamber, one with fingernail impression. All were of Neolithic or Early Bronze Age fabric. Sherds of a fourth pot were outside the entrance where the excavators considered it had been ritually smashed were also found. A large barrow once covered the chamber, it has only survived for about a quarter of the perimeter but suggests a total width of around 20m.

Information from the excavation indicated that it was in use in the Late Neolithic and Early Bronze Age (c. 1800-1400 B.C.). The barrow was still standing in the late 1st-2nd century A.D., when a small Roman settlement stood next to it. Around the twelfth or thirteenth century, the chamber was systematically turned over, perhaps by treasure hunters. Pits were dug under the stones and the barrow was shovelled away. This caused the chamber to collapse, sealing medieval sherds under the stones. Since then the site has been little disturbed. Boyle re-erected the stones as accurately as he could following his excavation.

The site, along with the Addington long barrow close by is open for public visits by appointment with the landowner.

There is an official website at [1][dead link] which details background, location and access to both the Addington Longbarrow and the nearby Chestnuts burial chamber.