Dounreay (Gaelic: Dùnrath) (Ordnance Survey grid reference NC982669) is the site of several nuclear research establishments located on the north coast of Caithness, in the Highland area of Scotland. Dounreay was originally the site of a castle (now a ruin).

Upper Dounreay formed part of the battlefield of the Sandside Chase in 1437.

The nuclear power establishment was built on the site of a World War II airfield, called HMS Tern (II). The airfield was transferred to the Admiralty by RAF Coastal Command in 1944, as a satellite of HMS Tern at Twatt in Orkney. It never saw any action during the war and was placed into care and maintenance in 1949.

Dounreay is near the A836 road, about 9 miles (14 km) west of the town of Thurso, which grew rapidly when the research establishment was developed during the mid 20th century. The establishment remained a major element in the economy of Thurso and Caithness until 1994 when the government ordered the reactors closed for good; a large population employed in the clean-up of the site (which is scheduled to continue until at least 2025) remains.[1]

Robert Gordon's map of Caithness, 1642, uses Dounrae as the name of the castle.

William J. Watson's The Celtic Place-names of Scotland gives the origin as Dúnrath, and suggests that it may be a reference to a broch. This is the commonly accepted toponymy.

According to folk etymology the name Dounreay came about after a local with a strong accent tried to pronounce Down Reay to a map maker (Down Reay being down the road from the village of Reay, with the rural and part-time post office at the entrance to the reactor establishment having had the correct name, Down Reay, above its door).

Dounreay Nuclear Power Development Establishment was established in 1955 primarily to pursue the UK Government policy of developing fast breeder reactor (FBR) technology.[1] The site was operated by the United Kingdom Atomic Energy Authority (UKAEA).[1] Three nuclear reactors were built there by the UKAEA, two of them FBRs plus a thermal research reactor used to test materials for the program, and also fabrication and reprocessing facilities for the materials test rigs and for fuel for the FBRs.

Remote Dounreay was chosen as the reactor location for safety, in case of an explosion.[1] The first reactor built was surrounded by a 60-metre steel sphere, still a feature of the landscape and nicknamed Fred the Golf Ball.[1][2] The two spheres were constructed by the Motherwell Bridge Company.

The first of the Dounreay reactors to achieve criticality was the Dounreay Materials Test Reactor (DMTR), in May 1958. This reactor was used to test the performance of materials under intense neutron irradiation, particularly those intended for fuel cladding and other structural uses in a fast neutron reactor core. Test pieces were encased in uranium-bearing alloy to increase the already high neutron flux of the DIDO class reactor, and then chemically stripped of this coating after irradiation. DMTR was closed in 1969, when materials testing work was consolidated at Harwell Laboratory. 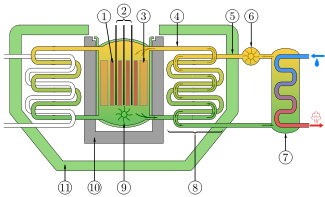 Schematic diagram showing the operation of the DFR, a NaK cooled FBR.

The second operational reactor (although the first to commence construction) was the Dounreay Fast Reactor (DFR), which achieved criticality on 14 November 1959, producing an electrical output of 14 MWe. This power was exported to the National Grid from 14 October 1962 until the reactor was taken offline for decommissioning in 1977. During its operational lifespan, DFR produced over 600 million kWh of electricity.[3]

DFR was a loop-type FBR cooled by primary and secondary NaK circuits, with 24 primary coolant loops. The reactor core was initially fuelled with uranium metal fuel stabilized with molybdenum and clad in niobium. The core was later used to test oxide fuels for PFR and provide experimental space to support overseas fast reactor fuel and materials development programmes.

The third and final UKAEA-operated reactor to be built on the Dounreay site was the Prototype Fast Reactor (PFR), which achieved criticality in 1974 and began supplying National Grid power in January 1975. The output of PFR was 250 MWe. The reactor was taken offline in 1994, marking the end of nuclear power generation at the site. PFR was a pool-type fast breeder reactor, cooled by liquid sodium and fueled with MOX. A remotely operated robot dubbed 'The Reactorsaurus' will be sent in to remove waste and contaminated equipment from this reactor as it is too dangerous a task for a human.[4]

Since the reactors have all been shut down,[1] care and maintenance of old plant and decommissioning activities have meant that Dounreay has still retained a large work-force. Commercial reprocessing of spent nuclear fuel and waste was stopped by the UK government in 1998 although some waste is still accepted from other nuclear facilities in special circumstances.

On 1 April 2005 the Nuclear Decommissioning Authority (NDA) became the owner of the site, with the UKAEA remaining as operator. Decommissioning of Dounreay is planned to bring the site to an interim care and surveillance state by 2036, and as a brownfield site by 2336, at a total cost of £2.9 billion.

Apart from decommissioning the reactors, reprocessing plant, and associated facilities, there are five main environmental issues to be dealt with:

Historically much of Dounreay's nuclear waste management was poor. On 18 September 2006, Norman Harrison, acting chief operating officer, predicted that more problems will be encountered from old practices at the site as the decommissioning effort continues. Some parts of the plant are being entered for the first time in 50 years.[9]

Due to the uranium and plutonium held at the site, it is considered a security risk and there is a high police presence.[1] 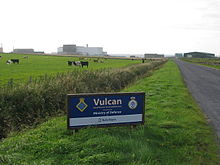 The Vulcan Naval Reactor Test Establishment (NRTE) is a Ministry of Defence (MoD) establishment housing the prototype nuclear propulsion plants of the type operated by the Royal Navy in its submarine fleet.

For over 40 years Vulcan has been the cornerstone of the Royal Navy's nuclear propulsion program, testing and proving the operation of four generations of reactor core and currently testing its fifth. Its reactors have significantly led the operational submarine plants in terms of operation hours, proving systems, procedures and safety.

Rolls-Royce, who design and procure all the reactor plants for the Royal Navy from their Derby headquarters, operate Vulcan on the behalf of the MoD and employ around 280 staff there, led by a small team of staff from the Royal Navy. Reactors developed include the PWR1 and PWR2.

In 2011 the MoD stated that NRTE could be scaled down or closed after 2015 when the current series of tests ends. Computer modelling and confidence in new reactor designs meant testing would no longer be necessary.[13] The cost of decommissioning NRTE facilities when they become redundant, including nuclear waste disposal, was estimated at £2.1 billion in 2005.[14]

The first reactor, PWR1, is known as Dounreay Submarine Prototype 1 (DSMP1). The reactor plant was recognised by the Royal Navy as one of Her Majesty's Submarines (HMS) and was commissioned as HMS Vulcan in 1963, though it did not go critical until 1965. HMS Vulcan is a Rolls-Royce PWR 1 reactor plant and tested Cores A, B and Z before being shutdown in 1984. In 1987 the plant was re-commissioned as LAIRD (Loss of Coolant Accident Investigation Rig Dounreay) a non-nuclear test rig, the only one of its kind in the world. LAIRD trials simulated loss of coolant accidents to prove the effectiveness of systems designed to protect the reactor in loss of coolant accident.

The second reactor, PWR2, is housed in the Shore Test Facility (STF), was commissioned in 1987, and went critical with Core G the same year. The plant was shut down in 1996, and work began to refit the plant with the current core, Core H, in February 1997. This work was completed in 2000 and after two years of safety justification the plant finally went critical in 2002 and is still critical today. Vulcan Trials Operation and Maintenance (VTOM) (the programme under which Core H is tested) is scheduled to be complete in 2014 and the reactor will be de-fuelled and examined. The site would then be decommissioned in conjunction with facilities at neighbouring UKAEA Dounreay.