The Worm Ouroboros
This article is about the fantasy novel by Eric Rücker Eddison. For the serpentine symbol, see Ouroboros.

The Worm Ouroboros is a heroic high fantasy novel by Eric Rücker Eddison, first published in 1922. The book describes the protracted war between the domineering King Gorice of Witchland and the Lords of Demonland in an imaginary world that appears mainly medieval and partly reminiscent of Norse sagas. The work is slightly related to Eddison's later Zimiamvian Trilogy, and collectively they are sometimes referred to as the Zimiamvian series.

The book was illustrated by Keith Henderson (1883–1982), who also illustrated books by Geoffrey Chaucer and W.H. Hudson.[1]

A framing story in the first two chapters describes the world of the novel as Mercury, though it is clearly a fantasy version of Earth, a "secondary world"; no effort was made to conform to the scientific knowledge of Mercury as it existed at the time of writing (the world even has a moon, which Mercury does not). At a number of points the characters refer to their land as Middle earth, used here in its original sense of "the known world", and the gods worshipped have the names of deities from Greek mythology.

The framing story having introduced the chief lords of Demonland — the brothers Juss, Spitfire, and Goldry Bluszco, and their cousin Brandoch Daha — the story begins in earnest with a dwarf ambassador from Witchland arriving in Demonland to demand that the Demons recognize King Gorice XI of Witchland as their overlord. Juss and his brothers reply that they and all of Demonland will submit if the king (a famous wrestler) can defeat Goldry Bluszco in a wrestling match.

The match is held in the neutral territory of the Foliot Isles, and Gorice is killed. His successor (or reincarnation) Gorice XII is a sorcerer who, with the help of Lord Gro, contrives the sorcerous removal of Goldry to a magical mountain prison.

While Lord Spitfire is sent back to raise an army out of Demonland, Lord Juss and his cousin Brandoch Daha, aided by King Gaslark of Goblinland, attempt an assault on Carcë, the capital of the Witches, where they think Goldry is held. The rescue fails, the Goblins flee, and Juss and Brandoch Daha are both captured. They escape with the aid of La Fireez, the king of Pixyland, who helps them at great personal cost because he owes them a debt of honor.

Juss and Brandoch Daha return home to Demonland and then start an expedition to rescue Goldry Bluszco from his terrible prison, somewhere past the mountains of Impland. Lord Spitfire again stays behind to lead Demonland's armies against an expected invasion from Witchland.

The expedition's fleet is smashed and its army destroyed. Juss and Brandoch Daha meet with three strange enchanted heroes of an earlier time, and Lord Juss is nearly killed by a manticore. After a year of wandering they climb the mighty peak of Koshtra Pivrarcha and then attempt the even more difficult peak of Koshtra Belorn. Before reaching the summit of Koshtra Belorn they encounter Queen Sophonisba, a royal from that area to whom the Gods had granted eternal youth when her realm was laid waste by the Witches.

From Sophonisba they learn that Goldry is held on the top of Zora Rach, a mountain which cannot be climbed and whose peak is surrounded by unceasing flames. There is only one way to free him: they must find a hippogriff's egg, and one of them must ride the newly hatched hippogriff. Queen Sophonisba gives Lord Juss one hippogriff egg, but their lone companion, the Impland native Mivarsh Faz, knowing that he will have to walk back home by himself if the Demons get the hippogriff, steals the egg and tries to use it himself, causing his death. Lord Juss and Brandoch Daha set out for home, their quest defeated for the time being, although matters are not completely hopeless as Queen Sophonisba's martlet scouts have told them of another hippogriff egg lying at the bottom of a lake in Demonland.

Meanwhile, the armies of Witchland have attacked Demonland. Duke Corsus is the first commander of the Witchland army, and conquers part of Demonland, but is defeated by Spitfire. A new Witchland army, under the command of Lord Corinius, defeats Spitfire and captures most of Demonland, including Brandoch Daha's castle of Krothering, which had been watched over by his sister Lady Mevrian.

At this point, Lord Gro changes sides and helps Lady Mevrian escape from the grasp of Corinius, who wishes to marry her against her will. A few months later Lord Juss and Brandoch Daha return and expel the Witches from Demonland.

Equipped with a new hippogriff egg, Lord Juss makes a second attempt to rescue his brother and this time is successful. However, his forces have been trapped in an inland sea by the Witchland navy and are forced to engage in battle directly, which they do, completely destroying that navy. La Fireez dies in this battle.

They then sail to Carcë and face the army of Witchland in a climactic struggle. Lord Gro is in the battle, and being lambasted by Corund for switching sides, promptly kills a Demon and is himself killed by Spitfire. Corund also dies from wounds he suffers fighting with the heroes of Demonland.

The night after the battle, King Gorice attempts another terrible summoning but, lacking the aid of Gro, is unable to complete the spell and is destroyed. Lord Corsus poisons the remaining nobles of Witchland, but is killed himself by the dying Corinius.

Though triumphant, the Demon lords find that victory is bitter because there are no more enemies worthy of their heroism, no more great deeds to perform. Sophonisba, seeking to reward their heroism, prays to the Gods, who return the world to how it had been four years before; and so, with a blare of trumpets, an ambassador from Witchland arrives, "craving present audience," and the story starts over again.

The kingdoms of Mercury

The named nations and countries are:

The King of Witchland claims lordship over a number of locations which are not described (page 12):

Despite the names of the nations, all the characters in the book are recognizably human and they are all the same species, or at least able to intermarry (e.g., Goldry Bluszco and Princess Armelline, Lord Corund and Lady Prezmyra). Witchland, Demonland, and others appear to be country names, like England and France. When first presented, the Demons are seen to have horns on their heads, but these horns are not mentioned again, nor is it said whether the other peoples have horns.

Gerald Hayes, a cartographer with the Royal Navy, created the first map for Ouroboros circa 1925, initially from internal evidence, and later in consultation with Eddison. He states in a letter to C.S. Lewis that he secured Eddison's approval "as a true presentation of all the lands, seas, and countries of his history."[2]

Another map of the world by Bernard Morris was published in Twilight Zine No. 4 and reprinted in the book An Atlas of Fantasy (compiled by Jeremiah Benjamin Post) in 1979.

For another map of these lands created by J. B. Hare in 2004, see The world of The Worm Ouroboros. For a German map by Erhard Ringer see Der Wurm Ouroboros

Research done by Paul Edmund Thomas (who wrote an introduction to the 1991 Dell edition) shows that Eddison started imagining the stories which would turn into The Worm Ouroboros at a very early age. An exercise book titled The Book of Drawings dated 1892 and created by Eddison is to be found at the Bodleian Library. In this book are 59 drawings in pencil, captioned by the author, containing many of the heroes and villains of the later work. Some of the drawings, such as The murder of Gallandus by Corsus and Lord Brandoch Daha challenging Lord Corund, depict events of Ouroboros.

As might be expected, significant differences exist between the ideas of a 10-year-old boy and the work of a 40-year-old man. Perhaps the most interesting change is in Lord Gro's character. In the drawings Lord Gro is a hero of skill and courage, while in the book he is a conflicted character, never able to pick a side and stick to it. Another curious change is that Goldry Bluszco is the main hero of the drawings, but off-stage in an enchanted prison for most of the novel.

Many people (including J.R.R. Tolkien) have wondered at and criticized Eddison's curious names for his characters (e.g. La Fireez, Fax Fay Faz), places and nations. According to Thomas, the answer appears to be that these names originated in the mind of a young boy, and Eddison could not, or would not, change them thirty years later when he wrote the stories down.

Meaning of the title 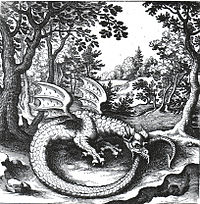 The title refers to Ouroboros (Jörmungandr in Norse mythology), the snake or dragon that swallows its own tail and therefore has no terminus (in Old English, the word "worm" could mean a serpent or dragon).

Like the Ouroboros, the story ends at the same place as it begins, when the heroes realize that their lives have little meaning without the great conflict and wish that it could continue, and their wish is granted.

The theme of repetition pervades the work. Near the beginning and again near the end, a king of Witchland dies, Carcë is attacked, and Gorice XII carries out a conjuring in the fortress's Iron Tower. There are two quests to find and recover Goldry Bluszco. Three armies, under the influence of an enchantment, chase each other in an endless campaign until the heroes shatter the cycle on their quest.

Comparison with other works

In contrast to The Lord of the Rings, to which mythopoeia is central, Eddison makes few references either to actual mythology or to an invented mythology after the fashion of the Silmarillion. One example of this is Eddison's ad hoc names for people and places versus Tolkien's invention of entire languages.

Also, while The Lord of the Rings is written mostly in modern English, Eddison wrote The Worm Ouroboros largely in Jacobean English, making use of his experience translating Norse sagas and reading medieval and Renaissance poetry; a nearly unique approach among popular fantasy novels.[3] Eddison incorporates a number of actual early modern poems into the story, including Shakespeare's 18th sonnet, all meticulously credited in an appendix.

The tale's morality has also been described as uncommon in modern fantasy; in particular, it differs sharply from Tolkien's heroism of the common man in a fight against evil and C. S. Lewis's Christian allegory. The Demon lords hold to the Old Norse warrior ethic of loyalty and glory. The leaders of Witchland are regarded as noble and worthy opponents; in the final chapter, Goldry Bluszco compares them very favorably with the "uncivil races" of Impland.[3]

The Worm Ouroboros did not sell well when first published, but after the publication of The Lord of the Rings it was reissued and achieved greater success.[3]

Reviewing a 1952 edition, Boucher and McComas praised the novel lavishly, describing it as "one of the major imaginative novels of this century" and "the detailed creation of a vividly heroic alien history." They particularly commended "the resonant clangor of its prose, the tremendous impetus of its story-telling, [and] the magnificent audacity (and sternly convincing consistency) of its fantasy concepts."[4]

In 1963, Avram Davidson praised the novel's prose for "abound[ing] in beautiful, quotable language" and its story as one of "war, witchcraft, adventure, conspiracy, violence, bloodshed, intrigue." Davidson, though, faulted Eddison's conception, saying "Ouroboros is a classic, but it is not and cannot be a great classic," because it lacks "humanity" -- the realistic detail of great works like the Arabian Nights, where characters "do not merely kiss and declaim and posture."[5]

Karl Edward Wagner was influenced by "The Worm Ouroboros" as a teenager.[6] Michael Swanwick quotes from Ouroboros in The Dragons Of Babel.[citation needed]