The station is on the High Barnet branch of the Northern Line, and is the terminus, and only station, of a branch from Finchley Central station. It is in Travelcard Zone 4 and the least used station on the Northern Line with 1 million passengers in 2008.

Mill Hill East station was built by the Edgware, Highgate and London Railway (EH&LR) and was opened as Mill Hill on 22 August 1867 by the Great Northern Railway (GNR) (which had taken over the EH&LR) in rural Middlesex. The station was on a line from Finsbury Park to Edgware via Highgate.

The EH&LR was built as a double track formation, but only a single track was laid, with the intention of doubling the track when business developed. However, when the GNR opened a branch from Finchley Central to High Barnet in April 1872 traffic on that section was greater, and the second track was never laid from Finchley Central to Edgware. For most of its history the service between those two stations was operated as a shuttle.

The station has had a number of names, including London Mill Hill and Mill Hill for Mill Hill Barracks. It was given its present name in 1928.

After the 1921 Railways Act created the Big Four companies, the line was, from 1923, part of the London & North Eastern Railway (LNER). The section of the High Barnet branch north of East Finchley was incorporated into the London Underground through the "Northern Heights" project begun in the late 1930s.

Mill Hill East is one of very few London Underground stations not to have ticket barriers.[citation needed] 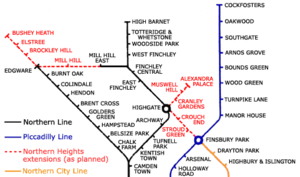 In preparation for transfer to London Underground operation, track laying and electrification had begun on the whole of the line from Finsbury Park when Second World War caused postponement of improvements. Passenger shuttle services on the Finchley Central to Edgware section ended on 11 September 1939 but, to provide quick rail access to Mill Hill Barracks, electrification of the short section between Finchley Central and Mill Hill East was completed although the track remained a single line. The station reopened on 18 May 1941. The work on the line from Mill Hill East to Edgware was left incomplete and after the war the proposal to electrify the line and incorporate it into the Underground system was abandoned. 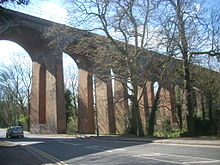 Regular passenger services never used the line beyond Mill Hill East again although it was operated by steam for freight until 1964 when it closed. The track and most of the infrastructure have been removed or destroyed but the alignment can be followed for most of its length.

Today, Mill Hill East station retains its Victorian architectural character and, as one of the two remaining original stations on the Edgware, Highgate and London Railway (along with Finchley Central), it is one of the oldest parts of the Underground, pre-dating the first tunnelled section of the Northern Line (the City & South London Railway) by more than 20 years.

As of October 2006, the Northern line service is a shuttle on the single track between Finchley Central and Mill Hill East, with the exception of peak-hour services. Direct weekend trains were discontinued on 20 May 2007. There is a local desire to retain the direct peak-hour trains, particularly in the mornings, since these provide seats for passengers into central London, instead of having to change on to crowded trains from High Barnet at Finchley Central.[citation needed]