Osmium tetroxide (also called osmium tetraoxide) is the chemical compound with the formula OsO4. The compound is noteworthy for its many uses, despite the rarity of osmium. It also has a number of interesting properties, one being that the solid is volatile.

Osmium tetroxide exists as a pale yellow-brown crystalline solid (monoclinic crystal symmetry[2]) with a characteristic acrid chlorine-like odor.[3] The element name osmium is derived from osme, Greek for odor. OsO4 is volatile: it sublimes at room temperature. It is soluble in a wide range of organic solvents, and moderately soluble in water, with which it reacts reversibly to form osmic acid (see below).[4] Pure osmium tetroxide is probably colourless[5] and it has been suggested that its yellow hue is due to osmium dioxide (OsO2) impurities[6] although osmium dioxide normally exists as a black powder.[7] Osmium tetroxide molecule is tetrahedral and therefore non-polar. This nonpolarity helps OsO4 penetrate charged cell membranes. OsO4 is 518 times more soluble in CCl4 than in water.

With a d0 configuration, Os(VIII) is expected to form tetrahedral complexes when bound to four ligands. Tetrahedral structures are seen for the electronically related oxides MnO4– and CrO42–.

The osmium of OsO4 has a formal oxidation state of +8, the highest oxidation state known for a transition metal. The osmium atom has eight valence electrons. If one assumes that two electrons are donated by each of the four oxide ligands, the total electron count for the complex is 16, as also seen for the isoelectronic species permanganate and chromate.

Osmium forms several oxofluorides, all of which are very sensitive to moisture. Purple cis-OsO2F4 forms at 77 K in an anhydrous HF solution:[9]

OsO4 catalyzes the cis-dihydroxylation of alkenes by hydrogen peroxide or related sources of oxygen atoms in the presence of water. The reaction that is catalyzed is[11]

In terms of mechanism, OsVIIIO4 adds to alkenes R2C=CR2 to afford cyclic "esters" R4C2O2OsVIO2, which undergo hydrolysis to give the vicinal diol and release a reduced osmium oxide (OsVI):

Lewis bases such as tertiary amines and pyridines increase the reaction rate. This "ligand-acceleration" arises via the formation of adduct OsO4L, which adds more rapidly to the alkene. If the amine is chiral, then the dihydroxylation can proceed with enantioselectivity (see Sharpless asymmetric dihydroxylation).[11]

OsO4 is used in catalytic amounts due to its toxicity and high cost. The osmium catalyst is regenerated by oxidizing agents, such as H2O2, N-methylmorpholine N-oxide (NMO, see Upjohn dihydroxylation), and K3Fe(CN)6. These oxidizing reagents do not react with the alkenes on their own. Other sources of osmium tetroxide include potassium osmate(VI) dihydrate (K2OsO4·2H2O) and osmium(III) chloride hydrate (OsCl3·xH2O) which oxidise to osmium(VIII) in the presence of such oxidants.[12]

OsO4 does not react with most carbohydrates.[13] It dissolves in alkaline aqueous solution to give the osmate anion OsO2(OH)42−.[14] OsO4 is a Lewis acid, and when the Lewis bases are amines, the oxides can undergo substitution. Thus with NH3 one obtains the nitrido-oxide:

The [Os(N)O3]- anion is isoelectronic and isostructural with OsO4. Using primary amine tert-BuNH2 one obtains the corresponding imido derivative:

OsO4 is very soluble in tert-butanol and in solution is readily reduced by molecular hydrogen to osmium metal. The suspended osmium metal can be used to catalyze hydrogenation of a wide variety of organic chemicals containing double or triple bonds.

OsO4 undergoes "reductive carbonylation" with carbon monoxide in methanol at 400 K and 200 bar of pressure to produce the triangular cluster Os3(CO)12:

In this reaction osmium changes oxidation state by eight units.

In organic synthesis OsO4 is widely used to oxidise alkenes to the vicinal diols, adding two hydroxyl groups at the same side (syn addition). See reaction and mechanism above. This reaction has been made both catalytic (Upjohn dihydroxylation) and asymmetric (Sharpless asymmetric dihydroxylation).

Osmium tetroxide is also used in catalytic amount in the Sharpless oxyamination to give vicinal amino-alcohols.

In combination with sodium periodate, OsO4 is used for the oxidative cleavage of alkenes (Lemieux-Johnson oxidation) when the periodate serves both to cleave the diol formed by dihydroxylation, and to reoxidize the OsO3 back to OsO4. The net transformation is identical to that produced by ozonolysis. Below an example from the total synthesis of Isosteviol.[15] 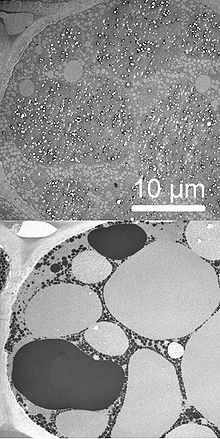 OsO4 is a widely used staining agent used in transmission electron microscopy (TEM) to provide contrast to the image.[16] As a lipid stain, it is also useful in scanning electron microscopy (SEM) as an alternative to sputter coating. It embeds a heavy metal directly into cell membranes, creating a high secondary electron emission without the need for coating the membrane with a layer of metal, which can obscure details of the cell membrane. In the staining of the plasma membrane, osmium tetroxide binds phospholipid head regions, thus creating contrast with the neighbouring protoplasm (cytoplasm). Additionally, osmium tetroxide is also used for fixing biological samples in conjunction with HgCl2. Its rapid killing abilities are used to quickly kill specimen like protozoa. OsO4 stabilizes many proteins by transforming them into gels without destroying structural features. Tissue proteins that are stabilized by OsO4 are not coagulated by alcohols during dehydration.[13] Osmium tetroxide is also used as a stain for lipids in optical microscopy.[17] OsO4 also stains the human cornea (see safety considerations).

It is also used to stain copolymers preferentially, the best known example being block copolymers where one phase can be stained so as to show the microstructure of the material. For example, styrene-butadiene block copolymers have a central polybutadiene chain with polystyrene end caps. When treated with OsO4, the butadiene matrix reacts preferentially and so absorbs the oxide. The presence of a heavy metal is sufficient to block the electron beam, so the polystyrene domains are seen clearly in thin films in TEM.

OsO4 can be recycled and stored in the form of osmeth, a golden crystalline solid. Osmeth is OsO4 complexed with hexamine and does not emit toxic fumes as opposed to pure OsO4. It can be dissolved in tetrahydrofuran (THF) and diluted in an aqueous buffer solution to make a dilute (0.25%) working solution of OsO4.[18]

OsO4 allowed for the confirmation of the soccer ball model of buckminsterfullerene, a 60 atom carbon allotrope. The adduct, formed from a derivative of OsO4, was C60(OsO4)(4-tert-butylpyridine)2. The adduct broke the fullerene's symmetry allowing for crystallization and confirmation of the structure of C60 by X-ray crystallography.[19] 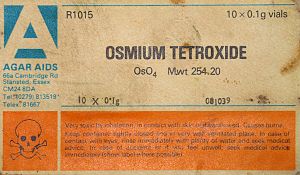 OsO4 is highly poisonous, even at low exposure levels, and must be handled with appropriate precautions. In particular, inhalation at concentrations well below those at which a smell can be perceived can lead to pulmonary edema, and subsequent death. Noticeable symptoms can take hours to appear after exposure.

OsO4 also stains the human cornea, which can lead to blindness if proper safety precautions are not observed. The permissible exposure limit for osmium tetroxide (8 hour time-weighted average) is 2 µg/m3.[3] Osmium tetroxide can penetrate plastics and therefore is stored in glass in a cold place.[13]

On April 6, 2004 British intelligence sources believed they had foiled a plot to detonate a bomb involving OsO4.[20] Experts interviewed by New Scientist affirmed osmium tetroxide's toxicity, though some highlighted the difficulties of using it in a weapon: osmium tetroxide is very expensive. The osmium tetroxide may be destroyed by the blast; what remaining toxic fumes may also be dispersed by the blast as well.[21]