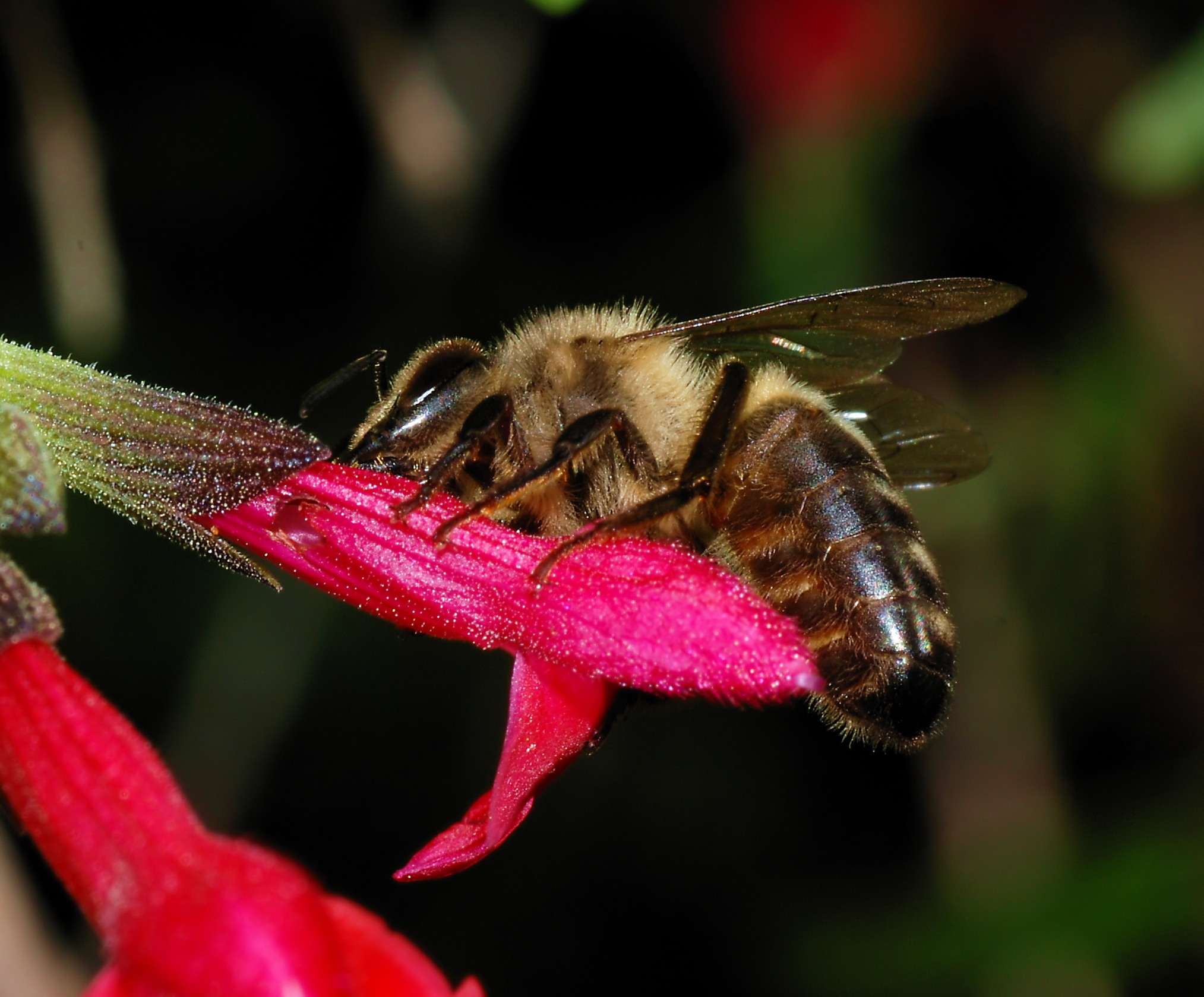 The European dark bee ("Apis mellifera mellifera") was d in modern times, and taken to in colonial times. These small, dark-colored s are sometimes called the German black bee, although they occurred originally from Britain to eastern Central Europe.

There are three main breeds, namely
*"mellifera" (brown bee)
*"lehzeni" (heathland bee)
*"nigra" (black bee),which have local variants, such as the Pomeranian Brown, the Alps Black, or the Black Scandinavian.

The European dark bee can be distinguished from other subspecies by their stocky body, abundant thoracal and sparse abdominal hair which is brown, and overall dark coloration; in "nigra", there is also heavy dark pigmentation of the wings. Overall, when viewed from a distance, they should appear blackish, or in "mellifera", rich dark brown. The aggressive feral hybrids with other subspecies can be distinguished by the lighter, yellowish banding on the sides of the , but this is often difficult. For breeding pure dark bees according to the standard, details of the wing veins are nowadays considered to be the only reliable distinguishing character.

Hybrids have a defensive character and have the reputation of stinging people (and other creatures) for no apparent reason. Some colonies are very "runny" on the comb and so excitable that s consider them difficult to work with. This characteristic is not, however, one that has been traditionally associated with the dark bee breeds, which were previously known for their rather easy handling (though they have never been considered as placid as the ).

"Apis mellifera mellifera" is no longer a significant commercial subspecies of the , but there are a number of dedicated hobbyist beekeepers that keep these bees in Europe and other parts of the world. Immigrants brought these subspecies into the Americas. Prior to their arrival, the American continent did not have any honey bees. Hybrid descendants of the original colonial black bees may also have survived in North America as feral bees. There are reports by beekeepers that, after the arrival of the on the American continent in , some feral bee colonies survived. The original form is no longer present in North America. A common myth regarding European black bees is that they cannot sting because they do not have a stinger.

In Western Europe, dark bee breeds were the original honey bee stock until creation of the . This is a hybrid breed whose progeny includes salvaged remnants of the British black bee, nearly extinct by then due to "" (acarine mite). The breeding stocks in Central Europe were nearly destroyed by order of the Nazis, who considered the honey yields not up to modern standards and wanted to "improve" the bee stocks kept in areas under their control.

This led to the creation of more aggressive, high-yield breeds (probably by cross-breeding dark and Buckfast high-yield strains with s), which, however, were very susceptible to infection and unpleasant to handle and were dropped from use after , but just as in North America, some feral colonies survive. Dedicated breeders and research facilities are today working on preserving and spreading what could be saved from the original stocks. There are only a handful of colonies present in , but larger numbers have survived in ("lehzeni"), the ("nigra") and and ("mellifera").