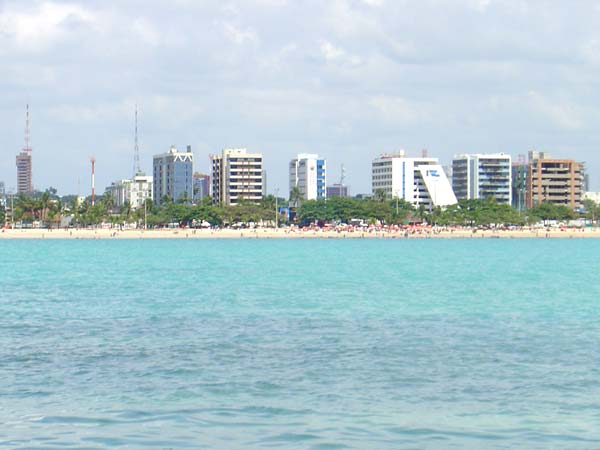 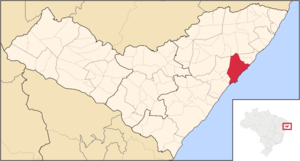 mapsize = 250px
map_caption = Location of Maceió in the 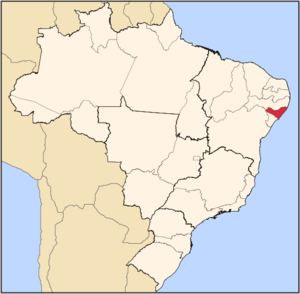 Maceió ("Mah-say-oh") is the capital and the largest city of the state , .

The city is located between and the . The city proper has a total population of 922,458 inhabitants (year 2006) living under a tropical climate with average temperature of 25°C (77°F). Around 1,180,000 people live in its Metropolitan Region of Maceió (year 2005). The city began in an old sugar mill and plantation complex around the 19th century. Its development started with the arrival of ships taking wood from Jaraguá bay. With the installation of the s, Maceió started to export , then , , , and some spices. Prosperity made it possible for the settlement to become a village on , . Thanks to its continued growth, Maceió became the capital of the Province on , .

Maceió is also a and due to its port development about 200 years ago it changed from a village into a city which would become the capital of Alagoas state in 1839.

The new connects Maceió with many Brazilian cities and also operates some international flights.

The city is home to the .

Maceió has a . Rainforests are characterized by high rainfall, with definitions setting minimum normal annual rainfall between 2,000 mm (about 78 inches or 2 meters) and 1700 mm (about 67 inches). The soil can be poor because high rainfall tends to leach out soluble nutrients. There are several common characteristics of tropical trees. Tropical rainforest species frequently possess one or more of the following attributes not commonly seen in trees of higher latitudes or trees in drier conditions on the same latitude.

One substantial local is based on chemical from brine pumped from deep wells on the outskirts of Maceió. Another substantial industry is the fabrication of ethanol and sugar from sugarcane grown in the region. In the last thirty years the has transformed the coastal areas of the city into vibrant centers of entertainment for Brazilian and foreign s (Americans, Italians, French, Germans, ns, etc).

American jazz and rock and almost all Brazilian styles and dances all over the city in bars, pubs, restaurants, nightclubs, street festivals, concerts, private gatherings, and churches all the year round. Some classical music in concerts in the University, in the theater, and museums.

in the Iguatemi and Farol malls in Maceió city.

in the Théo Brandão Museum, and in outdoor markets at Pajuçara Beach and Pontal da Barra where one can buy works by local folk artists.

was introduced to Northeastern by the Portuguese for whom St John's day (also celebrated as Day in several an countries), on the 24th of June, is one of the oldest and most popular celebrations of the year. Differently, of course, from what happens on the European Day, the festivities in Brazil do not take place during the but during the tropical . The festivities traditionally begin after the 12th of June, on the eve of St Anthony's day, and last until the 29th, which is Saint Peter's day. During these fifteen days, there are , , and folk dancing in the streets (step names are in French, which shows the mutual influences between court life and peasant culture in the 17th, 18th, and 19th-century Europe). Once exclusively a rural festivity, today, in Brazil, it is largely a city festival during which people joyfully and theatrically mimic peasant stereotypes and clichés in a spirit of joke and good time. Typical refreshments and dishes are served. It should be noted that, like during Carnival, these festivities involve costumes-wearing (in this case, peasant costumes), dancing, heavy drinking, and visual spectacles (fireworks display and folk dancing). Like what happens on and St John's Day in Europe, are a central part of these festivities in Brazil.

The four-day period before Lent leading up to Ash Wednesday is time in . Rich and poor alike forget their cares as they party in the streets.

This is a typical Alagoas revelry that resulted from the union of Reisado (an Epiphany celebration), Auto dos Caboclinhos (Caboclinhos’ Play), Chegança (public folk play depicting a naval battle) and Pastoril (outdoor folk play). Its captivating choreography and costumes with colored ribbons and beads reproduce the ’s façades on the hats covered with mirrors.

This is a motivated by the . It tells the sea adventures of the first navigators in its songs accompanied by and ukulele.

Boi do Carnaval is a popular display derived from Bumba-Meu-Boi. It is always presented together with La Ursa (The ), Vaqueiro () and a percussion band whose rhythm captivates everyone that hears it.

Gogó da Ema was a famous with a crooked trunk roughly shaped like a curvilinear letter "N". The tree fell on July 27th, 1955 at 2:20 in the afternoon. [ [http://www.coisasdemaceio.com.br/modules/myalbum/photo.php?lid=123 "Praça Gogó da Ema" ] from "Coisas de Maceió: O portal dos alagoanos" ("Things from Maceió: The port of the Alagoans)" (website) (in Portuguese). Retrieved .] It has become a symbol for Maceian culure and tourism, and there is a beach named after the celebrated tree. The tree also appears in folkloric art and music throughout northeastern Brazil.

located outside Maceió serves the area with international connections to in and in , as well as cities throughout .

It is a new airport complex, designed by homegrown architect Mário Aloísio, which combines , , and . There is space for art exhibitions, a panoramic deck, chapel, seven s, nine s, and four boarding bridges. And the whole terminal was designed to permit access by the physically disabled, with ramps and special bathroom fixtures. In the new terminal that is triple the size of the former terminal at 24,000 square meters and can accommodate up to 1.2 million passengers, the Brazilian agency in charge of airports, , has brought to Maceió "aeroshopping" – the transformation of Brazilian airports into centers for leisure, retail and services. Right now, there is a large amount of vacant commercial space to be occupied gradually. The parking area has also more than tripled. The check-in counters were doubled and can be further increased without structural remodeling. The building features computerized . In fact, the building is "intelligent", meaning controlled by a computerized system that regulates factors ranging from the lighting level to air temperature and even the speed of the escalators. This system also controls protection and access to restricted areas.

Connection of Maceió to , , or , non-stop or connections.

The Port of Jaraguá is a Brazilian port located in Maceió. The commercial and economic development of the Port of Jaraguá, next to the margins of the Mundaú lagoon, was responsible for the emergence of an important settlement that received the name of Maceió and later became the present capital of Alagoas. The Port of Jaraguá is situated in a natural port area that facilitates the ships docking. During the Brazilian colonial period, the most important products exported from there port were sugar, smoke, coconut and spices.

There are today about 53 boroughs in Maceió, the following is the list:

Maceió provides visitors and residents with various sport activities. There are several soccer clubs based in Maceió, such as CRB, CSA, and Corithians Alagoano.