Lake Nockamixon is a reservoir in southeastern Pennsylvania, and the largest lake in Bucks County. It is formed by a dam on Tohickon Creek and is the centerpiece of Nockamixon State Park. Swimming is not allowed in the lake, but boating is popular. The park maintains a marina and a boat rental as well as three other boat launch areas. Fishing is also popular, and common species include striped bass, walleye, pickerel, carp, largemouth and smallmouth bass, muskellunge, and catfish. The water is stained by vegetation and has a very faint current, since the lake is part of the course of Tohickon Creek. It is also fed by two other creeks known as Haycock Run and Three Mile Run.[1]

In the winter, the water sometimes freezes over, allowing for ice skating and ice fishing. The lake is surrounded by horse trails which provide for hiking as well.

Visitors to the lake can stay in one of several cabins, at nearby Weisel Youth Hostel, or at one of the many local private campgrounds.

Another recreational activity at the park is whitewater kayaking. Every June and November, if high water conditions exist, there are timed water releases from the dam for one day. This turns all of Tohickon Creek south of the lake into a whitewater course, and kayakers can go all the way from the lake to where the creek meets the Delaware River. 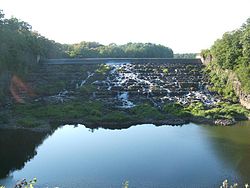 Creation of the lake was first proposed by the Secretary of the Department of Forests and Water, Dr. Maurice K. Goddard, for recreational uses. It was originally to be called Tohickon Lake, after the creek, but its name was later changed to Nockamixon, meaning "place of soft soil" in the Lenape language. The park today contains several historic Native American sites.

Following its proposal in 1958, the dam was built by the Army Corps of Engineers. The state park was opened to the public in December 1973.