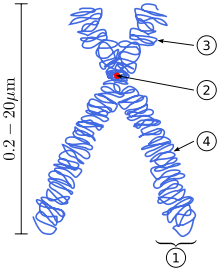 A centromere is a region of DNA typically found near the middle of a chromosome where two identical sister chromatids come closest in contact. It is involved in cell division as the point of mitotic spindle attachment. The sister chromatids are attached all along their length, but they are closest at the centromere.[1]

Each chromosome has two arms, labeled p (the shorter of the two) and q (the longer). The p arm is named for "petit" meaning 'small'; the q arm is named q simply because it follows p in the alphabet. (According to the NCBI, "q" refers to the French word "queue" meaning 'tail'.) They can be connected in either metacentric, submetacentric, acrocentric or telocentric manner.[citation needed]

If arms' lengths are unequal, the chromosome is said to be submetacentric.[citation needed]

If the p (short) arm is so short that it is hard to observe, but still present, then the chromosome is acrocentric (the "acro-" in acrocentric refers to the Greek word for "peak"). The human genome includes five acrocentric chromosomes: 13, 14, 15, 21 and 22.[citation needed]

If the chromosome's centromere is located closer to its end than to its center, it may be described as subtelocentric.[citation needed]

With holocentric chromosomes, the entire length of the chromosome acts as the centromere. Examples of this type of centromere can be found scattered throughout the plant and animal kingdoms,[5] with the most well known example being the nematode Caenorhabditis elegans.

There are two types of centromeres.[6] In regional centromeres, DNA sequences contribute to but do not define function. Regional centromeres contain large amounts of DNA and are often packaged into heterochromatin. In most eukaryotes, the centromere has no defined DNA sequence. It typically consists of large arrays of repetitive DNA (e.g. satellite DNA) where the sequence within individual repeat elements is similar but not identical. In humans, the primary centromeric repeat unit is called α-satellite (or alphoid), although a number of other sequence types are found in this region.

Point centromeres are smaller and more compact. DNA sequences are both necessary and sufficient to specify centromere identity and function in organisms with point centromeres. In budding yeasts, the centromere region is relatively small (about 125 bp DNA) and contains two highly conserved DNA sequences that serve as binding sites for essential kinetochore proteins.

The centromeric DNA is normally in a heterochromatin state, which is essential for the recruitment of the cohesin complex that mediates sister chromatid cohesion after DNA replication as well as coordinating sister chromatid separation during anaphase. In this chromatin, the normal histone H3 is replaced with a centromere-specific variant, CENP-A in humans.[9] The presence of CENP-A is believed to be important for the assembly of the kinetochore on the centromere. CENP-C has been shown to localise almost exclusively to these regions of CENP-A associated chromatin. In human cells, the histones are found to be most enriched for H4K20me3 and H3K9me3[10] which are known heterochromatic modifications.

In the yeast Schizosaccharomyces pombe (and probably in other eukaryotes), the formation of centromeric heterochromatin is connected to RNAi.[11] In nematodes such as Caenorhabditis elegans, some plants, and the insect orders Lepidoptera and Hemiptera, chromosomes are "holocentric", indicating that there is not a primary site of microtubule attachments or a primary constriction, and a "diffuse" kinetochore assembles along the entire length of the chromosome.

Centromere proteins are also the autoantigenic target for some anti-nuclear antibodies, such as anti-centromere antibodies.