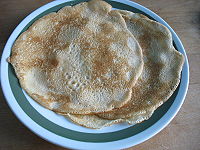 Frozen pre-packaged blintzes may be fried.

A blin, blintze, or blintz is a thin pancake. It is somewhat similar to a crêpe with the main difference being that yeast may be used in blini, but not in crêpes.

The English word blintz comes from the Yiddish בלינצע ("blintze), which in turn comes from blin. "Blin" comes from Old Slavic mlin, which means "a mill" (compare the Ukrainian word for blin млинець, mlynets’).

Blini had a somewhat ritual significance for early Slavic peoples in pre-Christian times since they were a symbol of the sun, due to their round form. They were traditionally prepared at the end of winter to honor the rebirth of the new sun (Butter Week, or Maslenitsa). This tradition was adopted by the Orthodox church and is carried on to the present day. Blini are also served at wakes to commemorate the recently deceased.

Traditional Russian blini are made with yeasted batter, which is left to rise and then diluted with cold or boiling water or milk. When diluted with boiling water, they are referred to as zavarniye blini. The blini are then baked in a traditional Russian oven. In fact, the process of cooking blini is still referred to as baking in Russian, even though these days they are almost universally pan-fried, like pancakes. French crêpes made from unyeasted batter (usually made of flour, milk, and eggs) are also not uncommon in Russia, where they are called blinchiki and considered to be a borrowed dish. All kinds of flour may be used for making blini: from wheat and buckwheat to oatmeal and millet, although wheat is currently the most popular by far.

Blintzes were popularized in the United States by Jewish immigrants who used them in Jewish cuisine. While not part of any specific religious rite in Judaism, blintzes that are stuffed with a cheese filling and then fried in oil are served on holidays such as Chanukah (as oil played a pivotal role in the miracle of the Chanukah story) and Shavuot (when dairy dishes are traditionally served within the Ashkenazi minhag).

Blini may be prepared and served in three basic ways.

It is the traditional meal in Lithuania during Lent.

Buckwheat blini are part of traditional Russian cuisine. They are also widespread in Ukraine where they are known as hrechanyky (Ukrainian: гречаники), and Lithuania's Dzūkija region, the only region in the country where buckwheat is grown, where they are called Grikių blynai.

According to the official Soviet recipe, the dough must be stirred by everyone present for the same amount of time, in order to share the work. It was also encouraged by the official recipe, to help each other in camaraderie, for example by letting a person hold the bowl while another person folds the egg-whites into the mixture.[citation needed]