Set on Jupiter's moon Io, it has been described as a space Western,[3] and bears thematic resemblances to High Noon.[4][5]

Federal Marshal William O'Niel (Sean Connery) is assigned to a tour of duty in a titanium ore mining outpost on Jupiter's moon Io.

Conditions on Io are difficult - gravity is 1/6 that of Earth's with no breathable atmosphere, spacesuits are cumbersome, and miners carry their own air supply. Shifts are long, but significant bonuses are paid. Sheppard (Peter Boyle) boasts that since he took over the running of Io, productivity has broken all previous records.

The film begins with a miner named Tarlow (John Ratzenberger) suffering an attack of delirium tremens ripping open his work-suit, resulting in his death by decompression. Later, another miner, Cane (Eugene Lipinski), goes outside without his spacesuit, and likewise dies from decompression.

With the assistance of Dr Lazarus (Frances Sternhagen), O'Niel investigates the deaths. However, another incident happens involving a worker, Sagan (Steven Berkoff), who takes a prostitute hostage and threatens to kill her with a knife. O'Niel attempts to calm the man by the main door, while Montone, O'Niel's sergeant (James B. Sikking), sneaks in via the air duct. Montone kills Sagan before O'Niel can talk with him.

O'Niel and Lazarus discover that all of the deaths had one thing in common, an amphetamine-type drug, allowing the miners to work continuously for days at a time. That is until they "burn out" and turn psychotic. O'Niel uncovers a drug distribution ring run by Sheppard and sanctioned by Montone.

Using surveillance cameras, O'Niel finds and captures one of Sheppard's dealers, placing him in isolation. But before he can be questioned the dealer is killed. Montone is then found garroted. O'Niel does find and destroy the latest shipment of drugs which were hidden in a food shipment from Jupiter. When Sheppard finds out what O'Niel did he calls in professional hitmen to kill him. O'Niel is ready, though, since he has been monitoring Sheppard's communications.

Knowing the assassins are on the way and with only Dr. Lazarus willing to help him, as his "last act" O'Niel sends a message to his wife (Kika Markham) and son, promising them that he will join them on the trip home to Earth.

When the men arrive, O'Niel tracks them and ambushes each, killing them. He is then confronted by Sheppard's "inside man", one of his own deputies. The two fight outside the base until O'Niel pulls the deputy's oxygen hose, suffocating him. O'Niel then confronts the surprised Sheppard in the base recreation bar, knocking him out with one punch. O'Niel retires and leaves to join his wife and son on the trip back to Earth. 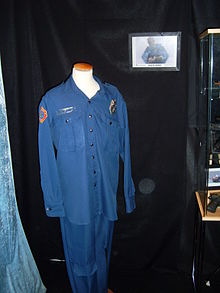 O'Niel's costumes at a convention in Stockholm, Sweden.

Outland was filmed at Pinewood Studios, Iver Heath, Buckinghamshire, UK, with an estimated budget of $16,000,000.[1] The film's working title was "Io" (the setting of the film), which was later changed because many people read it as the number 10, or "lo" ("low").[1] Principal photography took place in late-1980 and post-production was completed in February 1981.

Outland was the first motion picture to use IntroVision,[6] a variation on Front Projection that allows foreground, midground and background elements to be combined in-camera, as opposed to using optical processes such as bluescreen matting. This enabled characters to convincingly walk around miniature sets of the mining colony.

The mostly atonal and dissonant music to Outland was composed and conducted by veteran composer Jerry Goldsmith, who had previously worked with writer/director Peter Hyams on the science fiction thriller Capricorn One (1978). The soundtrack to Outland has been released three times on disk; 19 November 1993 through GNP Crescendo (with his score to Capricorn One), June 2000 through Warner Music Group, and a two-disc extended edition released 15 June 2010 through Film Score Monthly.[7]

Gary Arnold at the Washington Post had this to say: "In Outland, writer-director Peter Hyams has adapted the plot of High Noon to an intriguing sci-fi environment—a huge titanium mine located on Io, a volcanic moon of Jupiter. But the conventions that worked for High Noon break down in the high-tech atmosphere of Outland and the story seems trite and dinky".[4]

In the Boston Globe, Michael Blowen was more favorable: "The parallels between Outland and Fred Zinneman's 1952 western High Noon are apparent. Writer-director Peter Hyams has transported the characters and motifs from the dusty frontier town of Gary Cooper to the frontiers of space. While Hyams keeps the story barreling along, he also develops a corollary anti-capitalist theme. Io is an outpost for exploitation, and it doesn't make any difference whether the miners are digging gold in the Colorado hills or titanium on Jupiter's moon, the greed of the corporate class will prevail. Outland marks the return of the classic western hero in a space helmet. His outfit has changed and his environment has expanded but he's still the same. When Connery stares down the barrel of that shotgun, you'd better smile".[5]

Desmond Ryan at the Philadelphia Inquirer called it: "A brilliant sci-fi Western. In many ways, Hyams has made a film that is more frightening than Alien, because he surmises that space will change us very little and the real monsters we are liable to encounter will be in the next space suit.[9]

Outland was released on DVD on November 18, 1997. It was presented in both letterbox widescreen and full screen on a double sided disc with the soundtrack remastered in Dolby 5.1 surround sound. The Region 1 DVD is not enhanced for widescreen televisions.

On August 18, 2009, studio Warner Brothers announced that director Michael Davis had been hired to direct a remake of the film from a script by Chad St. John. No casting or start date information was announced.[11][12]