The Calendar (New Style) Act 1750 (c.23) (also known as Chesterfield's Act after Philip Stanhope, 4th Earl of Chesterfield) is an Act of the Parliament of Great Britain. It reformed the calendar of England and British Dominions so that a new year began on 1 January rather than 25 March (Lady Day) and would run according to the Gregorian calendar, as used in most of western Europe.

The Parliament held that the Julian calendar then in use, as well as the start of the year being 25 March was

To align the calendar in use in England to that in use on the continent, the changes introduced in 1582 by the Gregorian calendar were adopted with effect in 1752. To this end, the calendar was advanced by 11 days: Wednesday 2 September 1752 was followed by Thursday 14 September 1752.[2] The other changes brought about by Gregory were also adopted : the better rules for Leap Years and for the date of Easter.

Scotland had already made the change to having the year begin on 1 January in 1600 but adopted the Gregorian calendar only in 1752.[3][4] 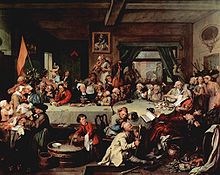 William Hogarth painting (c. 1755) which is the main source for "Give us our Eleven Days"

It has been reported in some history books that a number of the public rioted after the calendar change, requesting that their "eleven days" be returned. However, it is very likely this is a myth, being based on only two primary sources: The World, a satirical journal of Lord Chesterfield and a painting by William Hogarth.[5]

Chesterfield was behind the Calendar Reform Act of 1750. In one of his letters to his son he writes, "Every numerous assembly is a mob, let the individuals who compose it be what they will. Mere sense is never to be talked to a mob; their passions, their sentiments, their senses and their seeming interests alone are to be applied to. Understanding have they collectively none." Here, he was boasting of his skill in having the Bill passed through the Lords; the 'mob' in question was his fellow peers.[citation needed]

When the son of the Earl of Macclesfield (who had been influential in passing the calendar law) ran for a seat in Parliament in Oxfordshire as a Whig in 1754, dissatisfaction with the calendar reform was one of a number of issues raised by his Tory opponents. In 1755, William Hogarth made a painting (and an engraved print from the painting) loosely based on these elections, entitled An Election Entertainment, which shows a placard carrying the slogan "Give us our Eleven Days" (on floor at lower right). An example of the resulting incorrect history is by Ronald Paulson, author of Hogarth, His Life, Art and Times, who wrote that "...the Oxfordshire people...are specifically rioting, as historically the London crowd did, to preserve the 'Eleven Days' the government stole from them in September 1752 by changing the calendar."[5]

And thus it was that the "calendar riot" fiction was born. The election campaign depicted was one which concluded in 1754, after a very lengthy contest between Court Whigs and Jacobite Tories. Literally every issue between the two factions was brought up, including the question of calendar reform. The Tories attacked the Whigs for every deviation, including their alleged favoritism towards foreign Jews and the "Popish" calendar. Hogarth's placard, part of a satire on the character of the debate, was not an observation of actual crowd behaviour.[5]

There were, however, legitimate concerns about tax payments under the new calendar. Under provision 6 (Times of Payment of Rents, Annuities) of the Act, Great Britain made special provisions to make sure that monthly or yearly payments would not become due until the dates that they originally would have in the Julian calendar, or in the words of the act "[Times of Payment of Rents, Annuities] at and upon the same respective natural days and times as the same should and ought to have been payable or made or would have happened in case this Act had not been made".[1]

Several theories have been proposed for the odd beginning of the British financial year on 6 April.[6] One is that from 1753 until 1799, the tax year in Britain continued to operate on the Julian calendar and began on 5 April, which was the "old style" new tax year of 25 March. A 12th skipped Julian leap day in 1800 changed its start to 6 April. It was not changed when a 13th Julian leap day was skipped in 1900, so the tax year in the United Kingdom still begins on 6 April.[7][8] Poole thought that quarter days, such as Lady Day 25 March, marked the end of the financial quarters of the year.[5]:note 77 Thus, although 25 March Julian marked the beginning of the civil year, the next day, 26 March Julian was the beginning of the financial year before 1752. After removing eleven days in 1752, this corresponded to 6 April Gregorian, where it remains today. Although Poole's theory is supported by one dictionary,[9] the Oxford English Dictionary and another dictionary as well as other sources state that quarter days mark the beginning of their respective quarters.[10][11][12][13]